Courts May Keep Some Proceedings Virtual

While most court functions return in person, some advocate for keeping some meetings virtual. 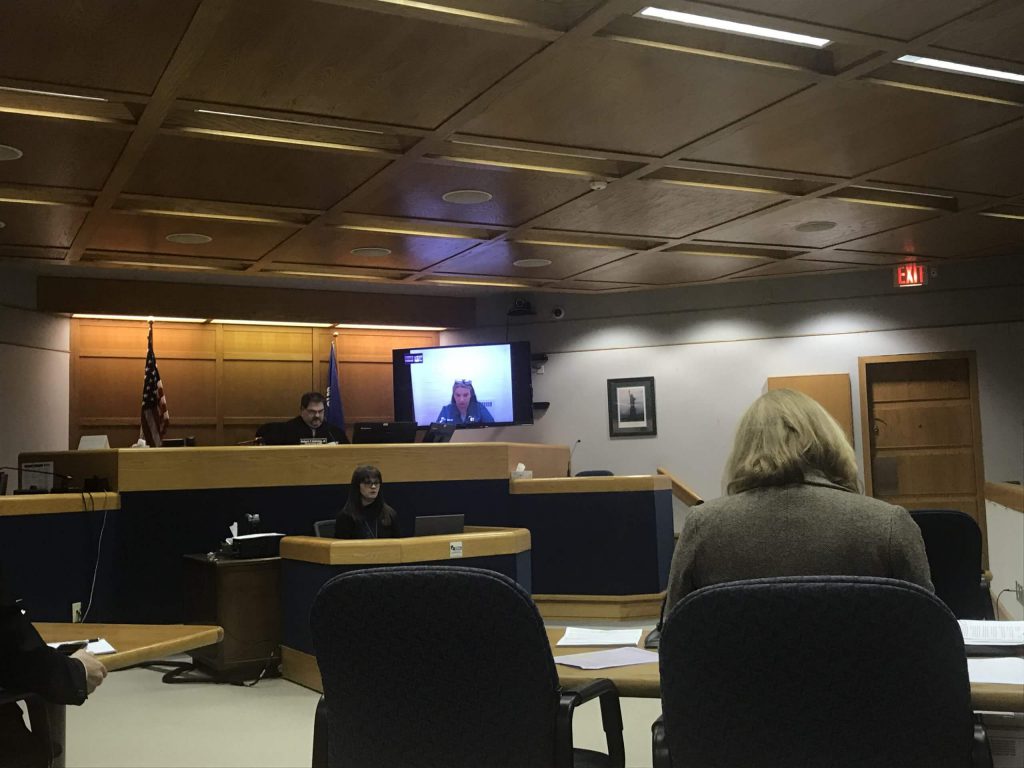 Video-conferencing in a Wisconsin courtroom. Defendants in court cases are increasingly having their day in court remotely. Photo by Henry Redman/Wisconsin Examiner.

The Wisconsin court system has been trudging along for the last 14 months, doing what it can virtually and trying to make in-person court appearances as safe as possible. But as the vaccination rate rises and the state emerges from the pandemic, people who work in the system want some of the lessons to remain — mostly the use of virtual court.

For many people who have come into contact with the criminal or civil court system over the last year, appearing virtually is easier. In the past, for even the most mundane court proceedings, a person had to take time off work, drive or arrange transportation to and from the courthouse, pay for parking and work out childcare for a hearing that may or may not happen at its scheduled time and could be just a five minute status conference.

At higher levels of the system, appearing virtually can also save taxpayer money. Without having to be in person, appellate lawyers in the State Public Defender’s office don’t need to drive for hours to and from Madison for a quick motion hearing. Virtual oral arguments before the Wisconsin Supreme Court also cut down the need for lawyers to travel from across the state.

“I expect it’s going to stick around and I hope it does for minor sort of court proceedings, not evidentiary hearings,” says Joe Ehmann, the attorney manager in the Madison office of the Wisconsin Public Defender. “But for people in my office, we represent people in all 72 counties. When we have a simple post-conviction hearing on a legal point that’s just arguments, being able to appear virtually makes a lot of sense, rather than driving five or six hours each way for what’s a 15 minute hearing.”

And in the federal courts, where complex conspiracy cases can sometimes have more than a dozen lawyers involved, it can be much easier to meet on Zoom than to get everyone into the same room.

“All of these counsel-only status conferences, frankly I think they should stay by Zoom,” says Victor Plantinga, a Milwaukee area criminal defense lawyer. “What happens is you’ve got 20 lawyers on a case — those cases [where] we regularly have status conferences — and that’s a lot of attorney time to go to the courthouse. When you have that many people you inevitably have Chicago lawyers too. It’s very frustrating to fight traffic to or from Chicago for what in essence is a two-minute status conference. Most of that is at taxpayer expense; $155/hour to do four hours of driving for a nonsubstantive two-minute court appearance doesn’t make a lot of sense.”

There are still concerns about being too heavy handed with the use of virtual court and potential violations of defendants’ right to due process. Ehmann says the system needs to “suss out the parameters and boundaries” of virtual court.

Most lawyers say that an in-person appearance is still required for hearings in which evidence is being presented or a witness is being questioned. Trials will still need to be conducted in person because criminal defendants have the right to face their accusers.

“Video court doesn’t work for that,” Ehmann says about evidentiary hearings and trials. “You need to be with your client because you need to communicate off the record with your client, but you also need to be in the room to feel the vibe of the room and the prosecutor. People still have a right to face their accusers, to still be present in court. Video ain’t present.”

But with those caveats in mind, the courts in Wisconsin are moving to make virtual court a permanent fixture.

Earlier this month, the judges working in the Dane County Juvenile Court System moved to continue virtual hearings. Going forward, Zoom will be an available option for a wide variety of family court hearings — including divorces, status updates and name changes.

Other appearances, including when someone is making a plea or being sanctioned, will be required to be in person while others — adoptions and the initial proceedings for a termination of parental rights — will be up to the judge’s discretion.

“The juvenile judges have met to determine what types of hearings will be required to be in-person and those that can be held using Zoom,” Judge Everett Mitchell, the presiding judge of the Dane County juvenile courts, wrote in a letter to attorneys and advocates who work in the system. “The majority of the letters we received from the County, Public Defender, District Attorney, and Guardian Ad Litem emphasized the equity that is afforded to many of our families via electronic court hearings.  A few of the benefits of electronic court hearings includes families not having to take time away from work in order to attend hearings; childcare; transportation; paying for parking; and young children being able to participate without missing critical educational instruction.”

“We thank all of you for the work, energy and care you have taken during this pandemic to ensure that children are safe, families are supported, young people receive services and victims are given an opportunity to participate in hearings,” he wrote. “This is a new journey, but this pandemic has provided us all with an opportunity to innovate so that justice and fairness is extended to everyone.”