By Madeline Fox, Wisconsin Public Radio - May 24th, 2021 11:36 am
Get a daily rundown of the top stories on Urban Milwaukee 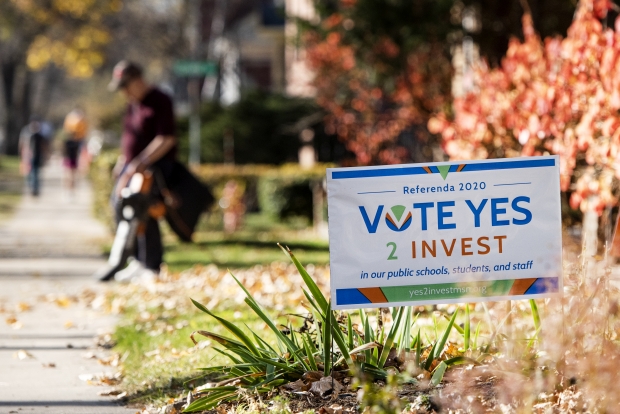 A yard sign in front of a home in Madison encourages residents to vote for a referendum Thursday, Nov. 5, 2020. Angela Major/WPR

The budgets school districts put out each spring are always intended to be a best guess, subject to change depending on what the state ends up providing in per-pupil aid and other funding and how many students are enrolled at the district the following fall.

This year is even more uncertain, though.

Schools saw a significant drop in enrollment this past year, mostly driven by declines in kindergarten and pre-K, and districts can’t be sure whether their numbers will return to normal next year. Additionally, the series of federal relief bills passed since March 2020 are set to inject more than a billion dollars into Wisconsin schools, but districts haven’t gotten finalized numbers on exactly how much they’ll get, or finalized federal guidance on how they can spend it.

Added to that, after a year of disruptions, loss, stress and trauma, it’s hard to predict how students’ needs will change. Many school districts are allocating more funding toward school psychologists, counselors and other mental health supports, and toward accelerated learning and remedial instruction, recognizing that students may not have been able to learn or retain as much as they could in non-pandemic years.

Still, a recent report from the Wisconsin Policy Forum shows more reason for optimism in the budgets of the state’s two largest districts than expected at the beginning of the pandemic.

“Schools are in better shape financially then we thought they would be this time last year,” said Jason Stein, one of the report’s co-authors. “At the onset of the pandemic, things seemed very dire for schools indeed.”

Both Milwaukee Public Schools and the Madison Metropolitan School District are able to take in more money moving forward thanks to referendums passed in 2020 that allow them to exceed state revenue limits. They’re also getting large amounts of one-time federal funding through the relief packages — an anticipated approximately $80 million for Madison schools, and closer to $800 million for Milwaukee Public Schools.

Because the federal relief money is a one-time infusion of cash — compared to annual allocations from property taxes, state aid and recurring federal funds for students with disabilities or low-income students — school districts are mostly looking at using it for one-time expenses.

In Milwaukee, that includes extended summer and Saturday hours to help catch students up on learning they may have missed during the pandemic and purchasing some new curricula and training teachers on how to use it, but by far the largest portion of the money that’s been allocated so far is going to facilities improvements.

Previous estimates put the total amount of building improvements needed in Milwaukee schools at about $970 million. So far, the district has earmarked about $200 million in its federal relief funds for facilities improvements.

“They can’t accomplish all of it to federal funds, but the federal funds certainly give them an opportunity to address existing facility needs,” said Ari Brown, another co-author of the report. “That can then free up money in other parts of their budget.”

Other school districts have similarly said they plan to put federal dollars toward facilities improvements — particularly HVAC systems and ventilation, which became an even more pressing concern during a respiratory pandemic.

“There are pretty extensive federal rules on how these funds can be used, and different rounds of funding have slightly different rules,” said Stein. “That said, the federal guidance does give them a pretty good amount of latitude to use them for a number of different things.”

The last time Wisconsin received large amounts of one-time federal funding for schools, following the Great Recession, it ended up cutting school funding at the state level a couple years later as the money dried up.

“When the bulk of that money ran out and the state went to do the next budget, the decision was ultimately made to cut state aid to schools and school revenue limits substantially, and that lingered for years afterward in terms of overall school funding,” said Stein.

State-level spending on schools and revenue limits had just started to return to pre-recession levels when the pandemic hit. Still, said Stein, that was driven in part by a sluggish economic recovery that meant the state budget didn’t bounce back very quickly — and doesn’t mean schools are doomed to again see state-level cuts when federal relief funds run out.

COVID-19 Pandemic Hasn’t Wreaked As Much Havoc On School Budgets As Experts Feared was originally published by Wisconsin Public Radio.