Agreement will have the city getting paid to plow snow in exchange for giving up traffic lanes. 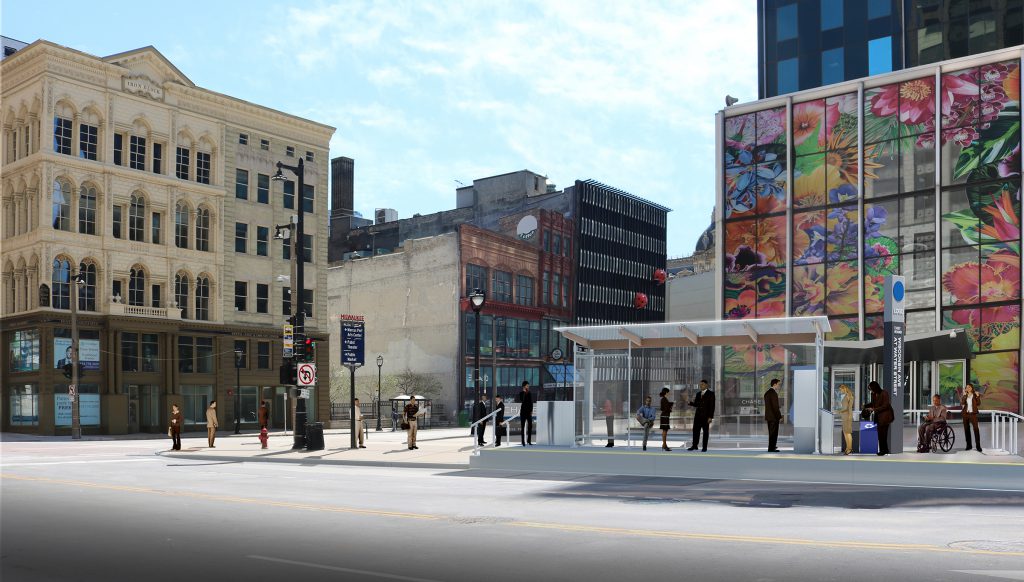 Despite the fact that the East-West Bus Rapid Transit line is a Milwaukee County project, the City of Milwaukee has a considerable say in its design and operation.

It was the Milwaukee Common Council that in 2016 eliminated the potential for bus-only lanes to replace parking spots on much of the route.

Now, with construction on the $55 million project set to begin in June, the Common Council is reviewing the final agreement to allow the county to reconfigure portions of W. Wisconsin Ave., N. Hawley Rd. and W. Bluemound Rd.

County officials appeared before the Public Works Committee Wednesday morning to secure approval of the agreement, which governs everything from who plows snow in what lanes to how fare evasion will be dealt with. Appearances before the committee have often been dominated by criticism from the council, but, with the exception of a single former county supervisor, the council backed the project this time.

The approximately nine-mile, twelve-stop line will run from the base of The Couture tower on the lakefront and west on Wisconsin Ave. to Hawley Rd., and then along Bluemound Rd. before snaking through the Milwaukee Regional Medical Center to the park-and-ride at Swan Boulevard.

Milwaukee Country Transit System transportation specialist David Locher presented a brief overview of the project, including the selection of battery-electric buses, the lack of fare boxes on the buses and the station design.

He positioned the new line as an enhancement of the existing GoldLine that services the corridor. The new service will have buses that move faster through a mix of dedicated lanes, off-bus fare payment, multi-door and level boarding, automated mobility device anchoring, traffic signal priority and fewer stops. Battery-powered buses will charge at each end of the route.

Get a daily rundown of the top stories on Urban Milwaukee
The city will not contribute any cash to the construction or operation of the system. But it will receive an estimated $10,000 a year in reimbursement for plowing snow, salting and pavement maintenance along the route said Public Works Commissioner Jeff Polenske. The city would also be reimbursed for any traffic signal upgrades or maintenance.

The county will be responsible for shoveling the entire elevated station, including under the 21-foot-long glass shelter. “If we had money in the budget to ask Apple to design us a shelter, this is more along the lines of what it would look like,” said Locher of the design versus the standard MCTS shelters.

“They’re going to be expensive stops, I’m not going to lie,” said Locher.

Fareboxes would be located at each station, some of which would be shared with existing lines, including Route 30. Riders boarding the BRT line would board through any door on the bus, similar to the streetcar, while those riding other lines would need to board at the front but could prepay.

“We are going to have security do spot checks to verify fare collection,” said Locher of MCTS’ contracted security service. “It’s mostly observe and report.”

“Report to whom?” asked Bauman.

“I believe there is a fare evasion ticket for the Milwaukee Streetcar that carries a $25 fine,” said Locher. “Yeah, but we don’t have fares,” responded Bauman.

“The long answer is we are still working out that sort of thing,” said Locher.

The agreement leaves fare evasion up to MCTS to deal with, but dealing with motorists obstructing the dedicated lanes is prescribed.

The dedicated lanes will run along Wisconsin Avenue from The Couture to N. Plankinton Ave. and again from N. 8th St. to N. Hawley Rd. The sections with dedicated lanes will have one less general travel lane than is there today. Parking will be maintained on the outside of the street.

The lanes will not have physical barriers, in part because people parking will need to cross them.

“So you’re relying on compliance with the law,” said Bauman with a laugh. “Like many of our citizens comply with traffic laws now.”

“Our riders will not be taking action, they will be calling it in like they normally do,” said Donna Brown-Martin, Milwaukee County Department of Transportation head.

The dedicated lanes will have diamond signs indicating they are only for buses or right-turns. The area near Marquette University, where there is no parking lane, will be painted with a cross-hatched pattern. There will be no automated camera enforcement.

The federal government, through a Small Starts grant, is funding $40.9 million of the project’s capital costs. The largest cost items are $16.87 million for “sitework and special conditions,” $15.22 million for the vehicles, $8.20 million for engineering costs, $7.35 million for “systems,” and $3.31 million for stations. Zenith Tech will build the infrastructure for the system after submitting the lowest bid at $15.2 million, a figure that covers multiple cost categories.

After other grants are accounted for, the county must come up with $11.85 million for the route. It will fund the route’s ongoing operation in part by eliminating the GoldLine. Locher said service will be added to Route 30 on the east end and discussions are underway with Waukesha County to cover lost service to Brookfield Square Mall from the route’s elimination.

Locher said the project is estimated to save 10 minutes on end-to-end travel time in the corridor. A study found that 21% of households within the corridor do not own or lease an automobile.

“If we didn’t use it from the feds, it just goes to another with another Small Starts project,” said Locher.

“Good god,” said Ald. Mark Borkowski into a hot microphone after Locher made his remark on where the funding could be reallocated.

After the presentation was finished, Borkowski teed off on the proposal.

“I am still going to stay consistent and be opposed to this, because I don’t believe in this bus rapid transit line and I haven’t since 2016,” he said. “It’s still taxpayer money.”

He said the money could be used to fix the city’s failing sewer or street light systems. “There is nothing in this that says we should go with this rather than all the other needs we have,” said the alderman, a former county supervisor. “I don’t want to get into that this is transportation money.”

“There is nothing that has been said to me ‘oh yeah, this makes sense.'”

Ald. Jose G. Perez brought up that shelters in his district haven’t been replaced after the glass was broken and he was concerned what the BRT shelters would look like under the same process. Locher said that shouldn’t be the case and promised to get that resolved.

The Public Works Committee adopted the agreement on a 4-1 vote, with Borkowski in opposition. The full council will need to adopt the agreement at an upcoming meeting. The line is expected to open in 2022.

BRT is a “Retirement Route”

MCTS awards routes based on a seniority basis, and Locher, a former driver, has a term for the East-West BRT: a “retirement route.”

Because no fare collection will be required and an automated device will service riders with wheelchairs, operators will be able to stay seated and won’t have to worry about passenger conflicts. Locher said this would make it desirable to the most senior drivers.

“I’m sure Jeramey Jannene will be happy to write that up: the retirement route,” Bauman said. Challenge accepted.