Including a video. With music. 'Trump wall’ better than 'Obama wall.’

By Ruth Conniff, Wisconsin Examiner - May 5th, 2021 03:57 pm
Get a daily rundown of the top stories on Urban Milwaukee 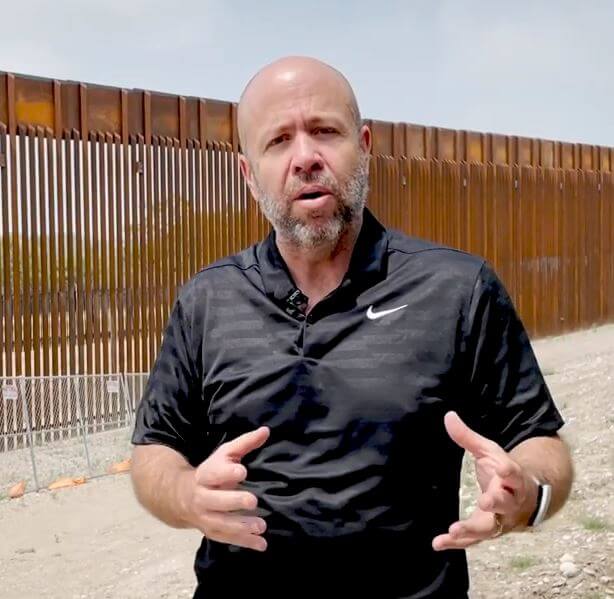 As Vice President Kamala Harris arrived in Milwaukee to promote President Joe Biden’s $2.3 trillion jobs and infrastructure plan, state Republicans were focused like a laser beam — 1,500 miles to the south, on the states that share a border with Mexico.

Assembly Majority Leader Jim Steineke and Assembly Speaker Pro Tempore Tyler August sent an open letter to Harris on May 4 highlighting what they called the “Southern Border Crisis” and urging the vice president to turn her attention away from job creation in their home state and instead address the “invasion” of migrants crossing into this country through Mexico.

Noting Harris’ visit had been “widely reported,” but skipping over the details of a plan that includes major investments in green energy, roads, bridges, removing lead from our drinking water and finally bringing broadband to neglected parts of rural Wisconsin, Wisconsin Republicans told Harris to go to Texas.

“The sheer number of illegal crossings has put a tremendous strain on Border Patrol agents, local law enforcement, and people living in communities throughout the south,” Steineke and August wrote. “They do not have enough agents to deal with this level of an invasion.”

The two referred to a recent trip they took to the border at the invitation of the conservative Texas Public Policy Foundation, where they talked with angry ranchers who say they fear for their safety.

They even made a video. With music.

August stands in front of the “Trump wall,” which, he explains, was “built to replace the insufficient Obama wall.” Alas, the Democrats are in charge again and . . . queue the music as we pan to the unbuilt section of the wall Biden does not plan to complete.

Clearly, Republicans would rather talk about a “border crisis” than the Biden/Harris administration’s ambitious jobs plan, which offers real hope of jump-starting the economy after the pandemic and creating millions of new jobs. After going AWOL for much of the last year, refusing to take up pandemic relief measures, running to court to have Gov. Tony Evers’ public health orders cancelled, then turning away billions of dollars in federal aid, they are now calling on Evers to send the National Guard to Texas. It’s almost pathological how they can’t seem to focus on what’s going on here at home.

The “border crisis” is a national Republican talking point — the party’s best effort to distract people from the Biden administration’s popular initiatives, and its own do-nothing record.

Both the Republican National Committee and Republican Sen. Ron Johnson joined the chorus, condemning Harris for her focus on Wisconsin and directing her to travel to the border. Johnson added that the federal infrastructure investments she came to Milwaukee to promote are a “boondoggle.” Harris visited UW-Milwaukee to learn about its cutting edge research and development in clean energy. Wisconsin Republicans might benefit from taking a similar trip when they’re not too busy flying off to Texas.

The whole focus on the border is, of course, misdirection from a party that does not care to engage in policy debates about what the government can do to actually help people, stimulate the economy, create jobs and address pressing needs.

The two Assembly leaders are also behind the news cycle. On Sunday, Homeland Security Secretary Alejandro Mayorkas told CBS that the number of unaccompanied migrant children held by the Border Patrol has dropped 88% since late March.

Customs and Border Protection (CBP) was holding 677 unaccompanied children over the weekend, compared to the record 5,767 lone minors the agency had in its custody on March 28.

But that dramatic progress did not stop Steineke and August from holding a news conference Tuesday morning to issue shrill alarms about the increasing pressure migrants are placing on the Border Patrol. Never mind that the Biden administration is emptying once-overcrowded migrant shelters, processing unaccompanied children and reuniting families in record time.

And never mind that the whole “border crisis” narrative is not a crisis at all, but a part of a familiar annual cycle, as demonstrated by years of Border Patrol statistics that show seasonal migration from Central America with a regular spring spike. Some of the current uptick in migrants on the border is explained by this usual seasonal pattern, and some is due to a backlog that built up because of Trump administration restrictions. Clearly, the children who are coming are fleeing terrible circumstances in their home countries; that’s the real crisis. Immigration lawyers who are trying to help them here worry that the fear-mongering about a the idea that their presence constitutes a crisis for the United States is going to make their situation worse.

Those facts are not interesting to Republicans who care more about scoring political points than dealing with actual problems.

If Republican legislators actually want to do their jobs for a change there is plenty of work they can do on the issue of undocumented immigrants right here in Wisconsin.

In their letter, Steineke and August purport to be deeply concerned about the plight of migrants “dying in the Rio Grande and dying in the Texas wilderness.” They express shock and horror at the millions of dollars per week they say Mexican cartels are making smuggling migrants across the border: “They are renting out buildings, buying car dealerships and warehouses, and stashing the migrants there while they work on plans to send them to every corner of this nation.”

It’s true that illegal immigration is big business. And that’s where Wisconsin comes in. We are one of those corners of the nation that receives a large number of undocumented immigrant workers. They prop up a huge part of our state economy. They are essential workers in agriculture, restaurants, meat packing, hospitality and construction. They form the backbone of our dairy industry, where, by some estimates, they do 80% of the labor on Wisconsin dairy farms.

Far from the scary, criminal invaders Steineke and August describe in their letter, the immigrant laborers who work for Wisconsin dairy farmers are viewed by their employers— a lot of whom are Republicans — as a godsend. Over the last couple of decades, Wisconsin dairy farmers have developed a deep, interdependent relationship with the Mexican and Central American workers who do most of the manual labor on dairy farms. It’s work, these farmers say, that most Americans don’t want to do — heavy, physical labor that starts at dawn and goes past nightfall, every day of the year.

If Steineke and August — and Johnson, for that matter — want to address the problems posed by illegal immigration, they could start by pushing for a legal work visa to help bring year-round agricultural workers out of the shadows and acknowledge the critical role they play in Wisconsin’s economy.

Short of visa changes, which have to happen at the federal level, Republicans in the Legislature could restore driver’s licenses to undocumented workers, which they took away under a 2007 law that requires any person who applies for or renews a driver’s license to have a social security number.

This law has made all Wisconsinites less safe by increasing the number of unlicensed drivers on the road, and has had no impact whatsoever on illegal immigration. John Rosenow, a dairy farmer in Cochrane, Wis., recently went to court to try to defend an employee from Mexico who was pulled for driving 5 miles per hour under the speed limit near his farm. It was a clear case of racial profiling, and it made Rosenow furious.

“Why should anyone even notice him driving a white SUV at 30 miles per hour through a 35 MPH zone at 6:30 at night on the 3rd of February?”  he wrote in an email. “The officer had discretion to do anything he wanted at that moment. He chose to turn on his lights, wield the power we gave him and cause exactly what he knew would happen. His actions had consequences that he was fully aware of.

“It does not count that Juan is:

“What did we accomplish today? Is the world safer? Did the county make money? His fine is $443.”

It’s an easy, cynical move for politicians to stoke fear and anger over immigrants in order to avoid their real responsibilities. But the lousy policies they make based on fantasies about an “invasion” have real consequences.

It has been a relief, in the Biden administration, to have leadership from Washington. Instead of throwing tantrums, playing on political and cultural divisions and trying to focus attention away from the other party’s constructive proposals, Republicans should grow up and do their jobs. August and Steineke were not hired by the people of Wisconsin to play Texas Ranger. As legislators they have the opportunity to help solve people’s real problems and make things in Wisconsin better instead of worse.