Ella With All the Scat Singing 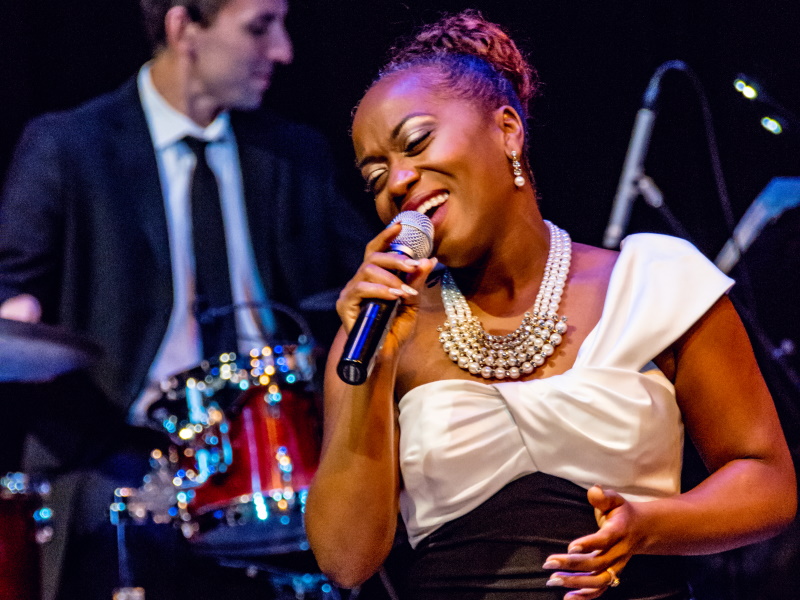 There was euphoria for me on April 30 returning to live theater after 13 months absence – the last time also at the Milwaukee Rep’s Quadracci theater – as the Rep cautiously reopened by moving an original Stackner Cabaret offering to the mainstage. In effect it was not theater but a slick concert with four expert instrumentalists in their own separate spaces backing a fabulous modern singer front-stage in First Lady of Song: Alexis J. Roston Sings Ella Fitzgerald.

There also was an eerie feeling to the whole masked enterprise, all for the sake of making the audience feel nurtured and protected through May 26. Three-fourths of the seats were blocked off by bright blue banners proclaiming “Stay Healthy”; temperatures were taken on the way in; restrooms had separate lines and there were more ushers on hand than I have ever experienced on a Rep opening night – or did they just look like more because they had so little to do?

The pressure on the small audience to erupt with full house applause was a bit offsetting, though applause was often deserved. The reality sank in that Ella’s extraordinary life that made her the “First Lady of Song” in history’s eyes would be related in word pictures and selected songs. Because it is a life screaming for dramatic portrayal – tomboyish teenager fleeing an abusing stepfather, a truant and runaway before prison reformatory and rescue with a Harlem Apollo Theater $25 win and Chick Webb, a bandleader who saw something magical inside the unkempt urchin.

Even the earliest Ella, as Alexis Roston tenderly recounts, had musical depths beyond providing the singing interlude within the big band tune, as was the fashion in the 1930s. Even then, as history books recount, there was a clarity to her diction, an equal competition with the instruments and a musicality so polished that many listeners assumed she had been classically trained, not a high school dropout.

After World War II, she was not the belle of bebop. But she was the bell sound inside bebop — – not to mention her scat singing dexterity and accuracy that brought decades of fans to their feet in amazement. Later her series of album Songbooks (devoted to Cole Porter or Ellington or Gershwin) set a standard of excellence that defied the shyness and lack of in-person sexual smoldering that defined her rise to the top.

Roston, who has also performed admirable tributes to Billie Holiday and Dionne Warwick, has deep appreciation for Ella, but also has that sexual smolder, that bold stage command of the audience that shy Ella didn’t, and the awareness that modern singing requires more showing off these days.

The concert is arranged to display Roston’s comfort with soul, country, jazz, gospel and all the echoes in between as well as selections familiar to the Ella repertoire, but also frankly to any aficionado of pop music: “Dream a Little Dream of Me,” “My Funny Valentine,” “I Got Rhythm,” “The Lady Is a Tramp,” “It Don’t Mean a Thing (If It Ain’t Got That Swing)” and on and on.

Again and again Roston growls to demonstrate that she can imitate Satchmo, but that only reminds us that the allure of Ella with Louis Armstrong in famous albums was butter simpatico with gravel.

Roston and company are serious students of Ella, made clear in a version of “Summertime,” which both initially and in its scat quality ad-libs at the end parallel to how the later Ella did the Gershwin tune. But while the ad-libs are exact, there were little extra dips along the way to sell the version.

Modern singing and advanced training have brought more reliance than during Ella’s heyday on showing off genres within genres, on flourishes moving among the high notes and back to the low ones. Ella’s remarkable gift was how easily she moved through the ranges and caught the exact intonation for a change in meaning or tone. “Alexis Sings Alexis” may not have the same marquee appeal as “Alexis Sings Ella,” but with appreciation for both singers, that would be more accurate.

The accompaniment and solo turns are deft and exuberant from musical director and pianist Jo Ann Daugherty, Joshua Ramos slapping the upright bass, percussionist Ryan Bennett and Rajiv Halim on both saxophone and flute. The entire production was under the supervision of Chicago’s Artist Lounge Live founders Angela and Michael Ingersoll.