Mondale And Gaylord Nelson Were Pals

The two longtime U.S. Senators were both Norwegians, and passionate about the environment. 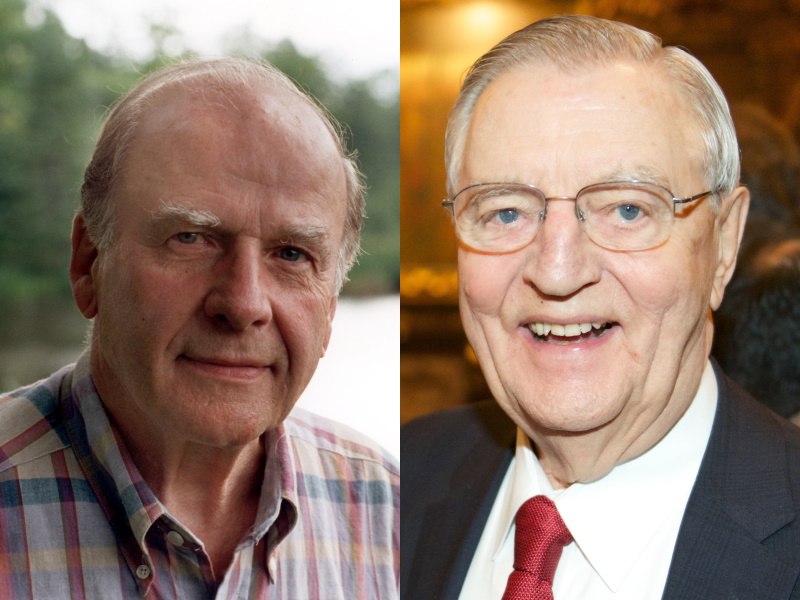 The passing of Walter Mondale just three days before Earth Day awakens memories of the long and close relationship between Mondale and Gaylord Nelson.

They were two unreconstructed northern liberals from neighboring states – and both Norwegians to boot – who were models of what it means to be a public servant. They served 12 years together in the U.S. Senate, but their friendship endured long beyond that.

Mondale became Jimmy Carter’s vice-president, and ran for president himself in 1984. Nelson, who founded Earth Day in 1970, left the Senate after three terms, losing his reelection bid in 1980, after which he joined The Wilderness Society to continue his environmental work.

“In all my life I never had a better friend,” Mondale said at Nelson’s State Capitol memorial service in 2005 attended by 5,000 people. “I knew Gaylord well. He had guts. He was real. He was what you saw. When you’ve been in public life as long as some of us, you get to recognize the posers, the pious, the trimmers, and the vain. So when you meet someone with courage, honesty, and decency, then you’re doubly inspired.”

Mondale and Nelson were among a cadre of World War II progressive veterans who got involved in trying to reform politics in their respective states. The two met in the early 1950s, and Mondale was at Nelson’s Senate campaign kickoff in 1962. “Gaylord was one of the people we admired because he was a reformer, had a political future, full of sparks and ideas,” Mondale recalled. The two men’s wives, Joan Mondale and Carrie Lee Nelson, also became friends, and “our kids all knew each other,” he said. The Nelsons knew him by his nickname, Fritz.

When Mondale came to the Senate in 1965, one of this first things he did was to join Nelson in sponsoring the Wild and Scenic Rivers bill, passed in 1968, which included protection of three Wisconsin rivers, one of them the St. Croix, in Mondale’s backyard, which flows between Minnesota and Wisconsin.

The St. Croix is “sort of a spiritual center for me,” Mondale told a Minnesota weekly newspaper, on the 50th anniversary of the bill. “My wife and I got married because we went down the river together, and a few years later we bought a house on the St. Croix in Scandia. I still sit there and watch the river go by and think of her. It’s a beautiful thing that can’t be matched.”

“To this day it’s one of the most satisfying things I’ve done,” Mondale said of the bill’s success In his memoir The Good Fight: A Life in Liberal Politics.

“I used to kid (Nelson) because I found out most of the opponents of the bill lived on my side of the river,” Mondale said in a 2001 interview for Nelson’s biography. “Gaylord had a way of getting me to do tough things. The St. Croix bill looks easy now, but at the time I took a lot of rackin.’ Gaylord was a big influence in getting me into these damned disputes and I’d get all ripped. Now I look back and I’m proud of every one of them. I tell young politicians, ‘Do something you think you’ll be proud of. Don’t trivialize your life.’”

“We were together on everything, agreed on most issues, from the same region, would check politics together, have a drink together in the afternoon,” Mondale said In a 2001 interview in his Minneapolis law office for Nelson’s biography.

But there was an exception. Nelson was an early, outspoken opponent of the Vietnam war, Mondale a supporter in the early years.

“We talked about it daily,” recalled Mondale, who said “the biggest mistake I ever made” was his support of the war for four years. “It is difficult to recreate the heartache, the sadness, the bitterness, the disarray that was growing in American life that pinned us all down. And while we did a lot of other things, there was no escaping the centrality of that issue. We would often discuss the news of the war and what it seemed to teach us.”

While he and Nelson disagreed, “Gaylord was very respectful of me. Gaylord would make his case and do it with dignity. He would not be offensive or confrontational.” Mondale said later that he was poorly informed. “The only thing I’m proud is, I finally got my head and I changed course. The one thing I would like to redo in my public life is to redo those years, and see the facts, change my mind, and have been helpful to try to end that war.”

Other Mondale observations from that 2001 interview:

NELSON’S STYLE: “In all my years with him I never saw him flare at anybody. I know he’s been mad but he’d keep himself under control. Gaylord penetrated the Republican aisle about as completely as anyone I knew. He was liked very, very much by a lot of Republicans.”

HIS ENVIRONMENTAL RECORD: “Most of all the environmental legislation that was passed, both regionally and nationally, most of the fundamental framework today governs the law protecting the enviro, was a product of Gaylord’s efforts. He had help but he was always in there organizing, pushing it through, developing coalitions, pleading with the administration, getting supporters organized to pressure Congress, that was what he loved doing and that’s what he did.”

NOT WORRIED ABOUT CREDIT: “He never paraded his ego. A politician either grows or he swells. Gaylord was never a horn blower. If someone else wanted to take the credit for something you wouldn’t find G doing much to stop it. He was looking at the substance.”

STANDING ALONE: “He had a little LaFollette in him. He wasn’t beyond standing alone if he thought things were wrong and he couldn’t persuade anybody he said it anyway. He voted against Ford and Rockefeller (both vice-presidential appointees), and went to a reception for them. Carrie Lee thought things were awful icy when they went through the line, and asked, ‘Gaylord, you SOB, did you vote against both of them?’  And he had.”

SENSE OF HIMSELF: “What was appealing about Gaylord and made him effective was he seems to have a sense of proportion and a sense of himself. It wasn’t a loose ego rattling around the deck that had to be assuaged. He did not want to be President; saved himself a lot of trouble there and became a better Senator. He wanted to live an important public life but he also wanted to live a healthy life where family and friends and rest and perspective had a place in their priorities.”

STRONG BELIEFS. “Gaylord had very strong beliefs about public policy. His niceness is not inconsistent with those beliefs. He was in public office for a purpose. It wasn’t ego, it wasn’t money, it wasn’t power, but the values.  He was an old liberal and he felt strongly about that. Just because he had a pleasant demeanor and had friends across the aisle didn’t mean he believed any less.”

VALUES AT CORE. “You don’t get to be a state senator and governor in Wisconsin unless you’ve got some fire and some ego and some beliefs to push you along. Beneath that exterior was that hard central core of values and beliefs that drove him to be one of the most respected public officials in the country.”

DEFEAT IN 1980: ‘I think defeat in 1980 hurt him. I felt he wasn’t campaigning well, wasn’t at his best, I don’t know what it was, but spark and charm wasn’t quite there when I was with him a couple of times. I was told he was very irritable with staff, which was unlike him; maybe he could sense it slipping. I had been with him two or three times, and could tell it wasn’t clicking.  I thought he’d win but it didn’t astonish me that he didn’t…That kind of hurt, there’s no medicine for it, only time, and I wonder if you ever get over it.”

Bill Christofferson is author of The Man From Clear Lake, a biography of Gaylord Nelson and is a former journalist and Democratic consultant.

2 thoughts on “Mondale And Gaylord Nelson Were Pals”