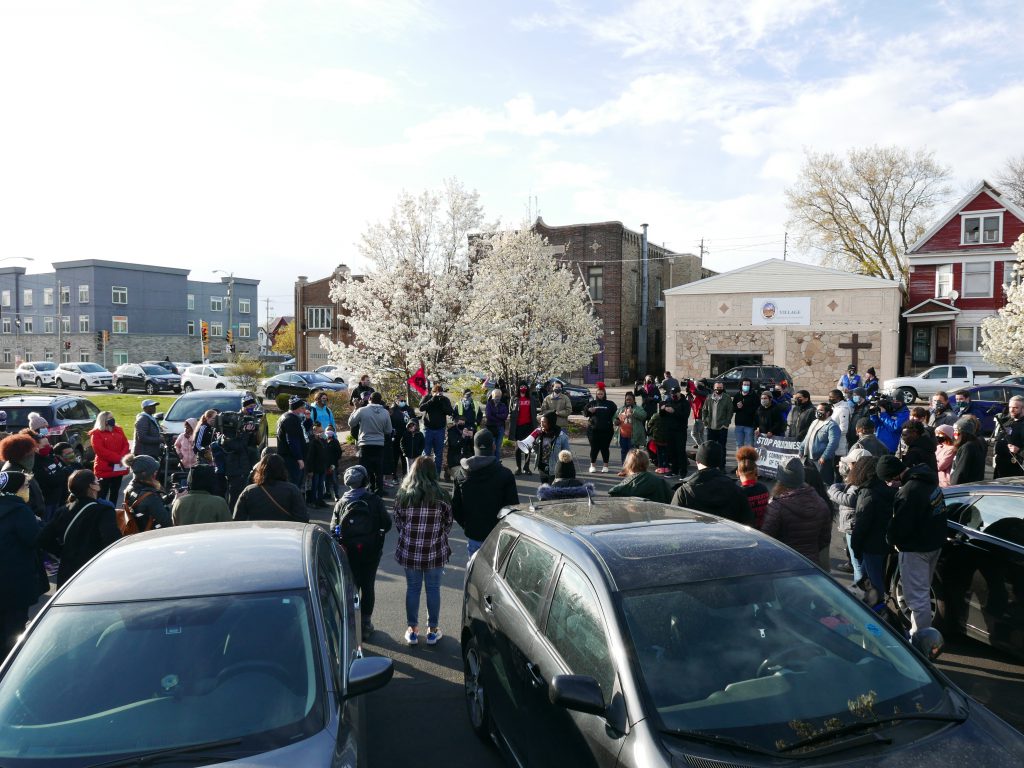 Local activists and residents rallied Tuesday afternoon in response to the verdict in the murder trial of Derek Chauvin for the killing of George Floyd.

Near the intersection of N. 27th and W. Center Streets, more than 50 people, many of them longtime marchers with The People’s Revolution (TPR), met to celebrate the jury’s guilty verdict in the trial of former police officer Derek Chauvin in Minneapolis.

Floyd’s killing in May of 2020, which sparked the massive protests of last summer, was also the event that led to the formation of The People’s Revolution protest movement. As the crowd gathered many were smiling and hugging one another, celebrating the good news.

It was the 326th day since the protests began, and it was the first time the group had gathered to celebrate justice for George Floyd and his family. Despite the celebratory mood, the common refrain was that this was just the beginning and there is still much work to be done.

One of the marchers who has become a leader of the protest group, Mariah Smith, was the first to address the crowd gathered in the parking lot. The rally really had barely begun and she said, “A 15 year old girl just got shot by the police in Ohio.”

The revelry from the guilty verdict was quickly overcome by the sense of unfinished business. Smith reminded the crowd that even though they are pleased with the verdict, there are going to be many Americans who are unhappy with this outcome.

Vaun Mayes, a protest leader and organizer with Community Task Force MKE, told the marchers that while justice was served in the Floyd killing, “We have our own George Floyds here.”

“A lotta names and hashtags that we’ve been talking about for years that nobody ever got charged,” he said. Mayes said the Chauvin verdict is a “blueprint” for future justice.

Another TPR organizer, Percy Hayes, Jr., brought Maria Hamilton, mother of Dontre Hamilton, out in front of the crowd, and continued the idea Mayes expressed. “Today is a celebratory moment,” Hayes said. “But it also serves a stark reminder that everybody doesn’t see justice.”

Get a daily rundown of the top stories on Urban Milwaukee
Dontre Hamilton was shot and killed by a Milwaukee police officer in Red Arrow Park in 2014. Hayes said the marches seeking justice for Dontre were the first he ever attended. He said Maria Hamilton was his motivation, and one of the reasons they had been marching for nearly a year in pursuit of a future where no one has to experience the pain that the Hamilton family experienced.

Maria Hamilton said they shouldn’t have to celebrate the authorities in Minneapolis “for doing their damn jobs.”

After the rally, as the marchers started east on Center Street, Mayes told Urban Milwaukee he felt like the verdict was a step in the right direction for Minnesota, but he couldn’t say the same for Milwaukee or Wisconsin.

Mayes sees the path forward through political action and power. He said he believes the Milwaukee Police Department “is making strides to move in the right direction,” but lamented that the political will for true change isn’t there yet.

“We can’t have the police at a point where they’re willing to do something, and people not support them,” he said. “Our senators, our legislators and our other elected folks need to join them.”

He said Floyd’s killing was a galvanizing moment for reform and action unlike anything that’s come before. It’s created an environment where change is possible, he said, and just needs to be seized. 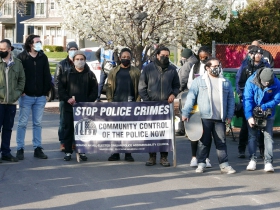 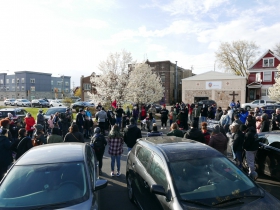 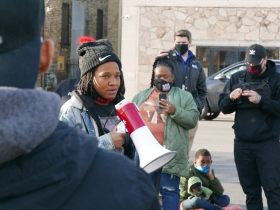 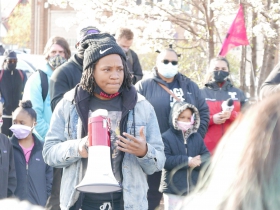 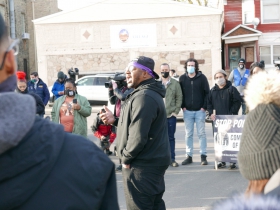 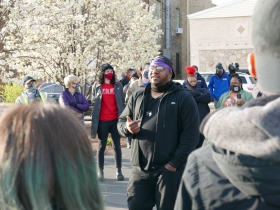