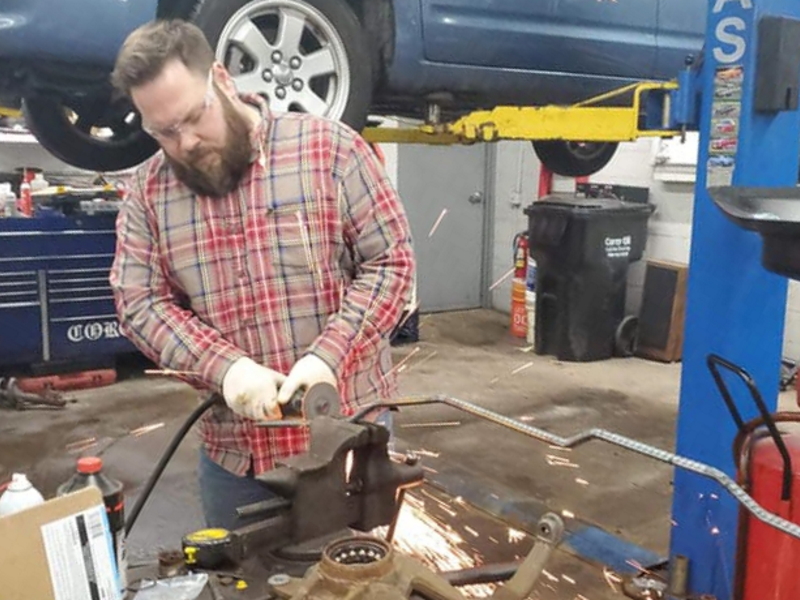 Since earlier this year, reports of auto parts theft have become more common as the value of precious metals found inside catalytic converters rise higher than the cost of gold. With that in mind, a Bay View mechanic is offering a service to deter thieves from removing and stealing the catalytic converter from your car.

Elijah Corona, owner of The Family Mechanic (1122 E. Holt Ave.) has found a creative way to subvert these criminals by bending rebar rods and welding them over the external devices.

Corona says the idea of using reinforced steel rebar is to create enough of a deterrent to make thieves think twice before targeting vehicles.

“It’s not making it impossible to steal, but it makes it extremely difficult,” said Corona. “We’re hoping by having those pieces in place it’s just enough of a deterrent to stop these thieves. They look underneath and see the rebar and say it’s not worth it.”

The steel rods, purchased from local metal suppliers, are bent with a torch and tack welded onto the underside of a customer’s car. A steal that could take only seconds with cutters or a power saw would take a half hour to 45 minutes with a pair of rebar rods in the way of the converter.

Catalytic converters, devices used for reducing the pollutants of exhaust gas as they leave the engine of an automobile, are targeted because they can be easily taken off the underside of a car or van with the right tools. Thieves can either melt the converters down and sell off the platinum and palladium inside or sell the whole part to a salvager or recycling center.

Get a daily rundown of the top stories on Urban Milwaukee
Advertisements for core buyers, companies that buy and recycle used auto parts, run rampant on places like Facebook Marketplace and Craigslist. A search for catalytic converters on either platform can open pages full of parts buyers and sellers without documentation.

Imported vehicles and vans are often targeted the most for catalytic converter theft. “Hondas and Kias, SUVs and minivans are targeted,” Corona noted. Ford trucks and vans have been easy targets as well. But the Toyota Prius is number one on the list because it has the most valuable converters.

Corona’s rebar idea came after working with one customer whose Honda Element was stolen from three times in two years. Most thefts are compensated with insurance claims, but deductibles are paid out of pocket. “You’re already out of pocket for a hundred to a thousand dollars on a deductible, ” he noted.  “That’s when the idea of rebar came in,” to prevents thefts and the loss of money.

The Family Mechanic gets most of its customers from Bay View, yet Corona says he works on half a dozen catalytic-converter related services per week. The shop has made hundreds of replacements over the past sixth months.

“We’re talking dozens (of thefts) a night here in Milwaukee. It doesn’t seem to be slowing down,” he said. “I joke with my customers that I can’t believe there are any Honda CRVs, Elements or Toyota Priuses in the Bay View market that still has a factory converter in it.”

Why is catalytic converter theft so widespread right now? Corona points to hard times brought by the COVID-19 pandemic.

“With a lot of people losing their jobs with the pandemic, there’s a lot of desperate individuals out there and they’ve turned to crime obviously to substitute their income loss,” he said. “These catalytic converters are a very easy item for someone with the proper tools and knowledge to steal.”

One thought on “A Mechanic’s Solution For Auto Parts Theft”