By Ruth Conniff, Wisconsin Examiner - Mar 21st, 2021 03:11 pm
Get a daily rundown of the top stories on Urban Milwaukee 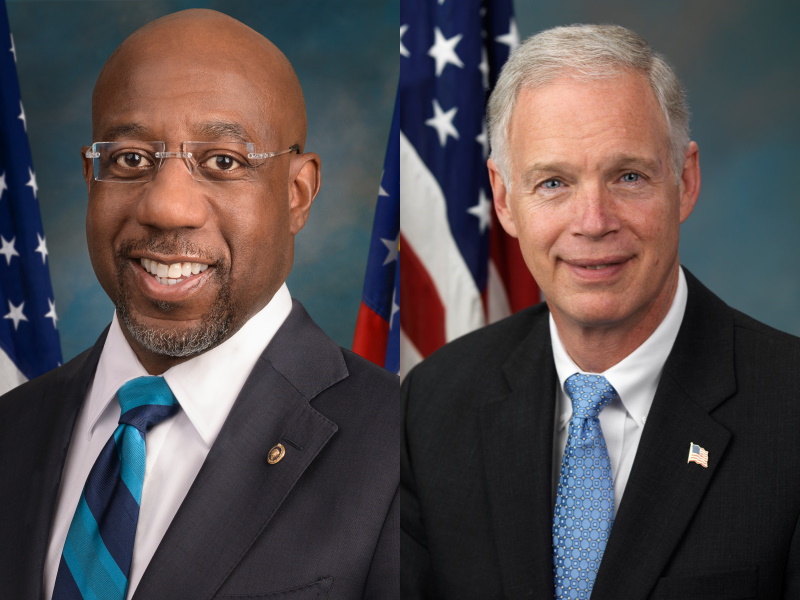 Sen. Raphael Warnock (D-Ga.) said in an interview on SiriusXM’s The Joe Madison Show that he would like to sit down with Sen. Ron Johnson (R-Wis.) and talk to him about his incendiary comments expressing comfort with the Capitol rioters and fear of Black Lives Matter protesters.

“I’d like to talk to the brother,” Warnock said. “He is obviously misguided. Whenever someone says, ‘I’m not concerned when people are violently attacking the Capitol, but I would be concerned if these were Black Lives Matter activists,’ and then he says there was nothing racial about his comments — that suggests a kind of racism and moral blindness that makes it difficult for him to see what’s obvious.”

“I think that part of how bigotry works is that it renders one irrational in a lot of ways,” Warnock added.

Johnson’s comments on a talk radio show last week generated a firestorm of criticism after he invoked race to explain why he didn’t feel threatened during the Jan. 6 Capitol riot, which resulted in five deaths, including that of one Capitol police officer, and resulted in the injury of 100 other police officers.

“Those comments were racist,” Ramsey said. “Now if you ask him, he’ll say, ‘Oh, no racial overtones at all.’ It’s ridiculous. He is part of the problem, and he is not alone.”

Ramsey connected Johnson’s comments to a rise in hate crimes throughout the United States. “It goes beyond just our House and our Senate.” he said. “I mean, the rise in hate crimes in this country — whether it’s directed toward Asian Americans, African Americans, Latinos, it doesn’t matter — we have to take a stand against it. It’s just something that can’t be tolerated anywhere in this country. But to hear it come from an elected official, a senator, I mean that pretty much says it all.”

Johnson, who has served in the U.S. Senate since 2010, announced recently that he is not planning to run for governor in 2022. There has been widespread speculation about whether or not he will keep his 2016 promise, as a believer in term limits, not to run for a third Senate term. Not running is still “probably my preference for now,” he told reporters earlier this month. But, he added, “I think that pledge was based on the assumption we wouldn’t have Democrats in total control of government and we’re seeing what I would consider the devastating and harmful effects of Democrats’ total control just ramming things through.”

In addition to Johnson’s supportive comments about the violent protesters who took over the Capitol on Jan. 6, whom he said “love this country” and “respect law enforcement,” Johnson has made news recently for objecting to the $1.9 trillion federal COVID relief bill, which he delayed by insisting that the senate clerk read all 628 pages aloud on the Senate floor.

Democratic candidates have been lining up to run against Johnson, and the state Democratic Party began running ads against him two years before the election. Whether or not he runs, the race for his seat will be a focus of national attention in a swing state that could determine the balance of power in a narrowly divided Senate.