Where the Bones Are Buried

MCT production dramatizes a tragic story along the Mexican border. 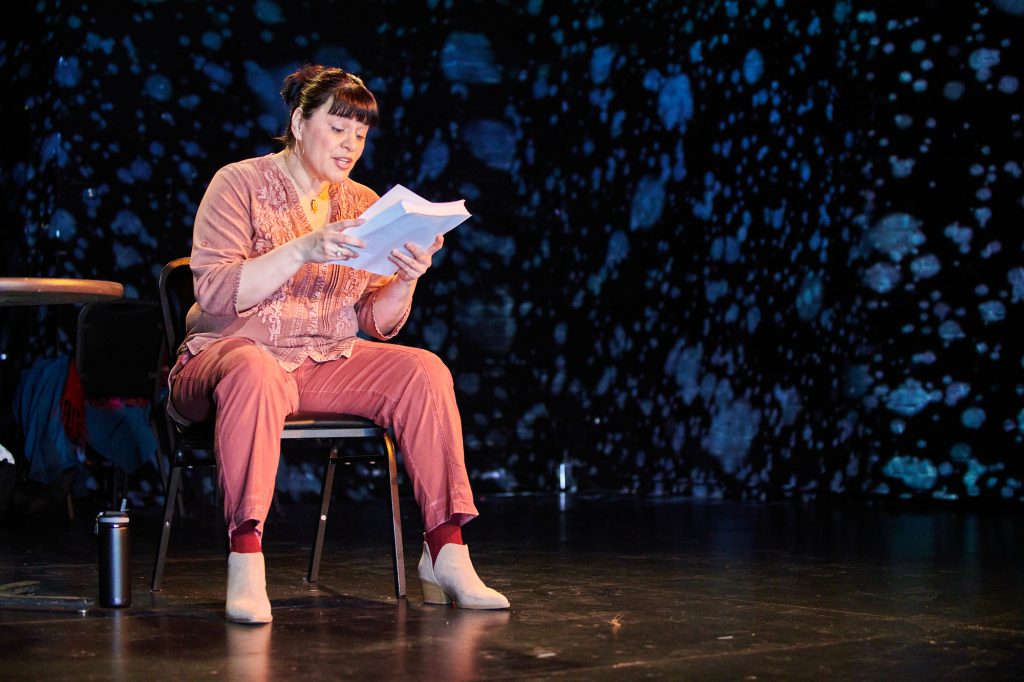 Michelle Lopez-Rios in the Milwaukee Chamber Theatre’s The Way She Spoke. Photo by Paul Ruffolo.

The mutilation, murder, rape and random graveyards of thousands of young women and female children within and around the border town of Ciudad Juarez, Mexico, have over decades been the unsolved shame of two nations, an indictment of machismo behavior, police attitudes and even corporate culture since many of the women worked at manufacturing mills of major US companies. The town as well as the governments have long been burying bones as well as knowledge in a relentless true-life horror still too little known in the US.

Playwright Isaac Gomez has been consumed with spreading the story, first in an award-winning Chicago Steppenwolf play La Ruta (The Route) with a large cast in 2018 and more recently for audio and stage he has fashioned a one-person play The Way She Spoke, the second online presentation of the Milwaukee Chamber Theatre under a deal with theatrical unions. It runs through April 11, easy to access here.

This is the sort of high quality offering that should be explored online though it also exposes precisely where live theater and online presentations diverge and forces limitations on the experiment that patrons themselves must learn to understand – even when the importance and humanity of the story compel our eyes and ears.

A Latina actress, who clearly has just survived an audition where she was asked to play one of those typical Cha Cha spitfire characters, enters an audition, reads the script as if learning the disgusting details for the first time, marks passages of concern, questions the invisible male playwright in the audience and slowly departs from reading the script to melt into the suffering individual mothers, lost girls, prowling men, complicit townspeople and other observers doing nothing about the tragedies around them.

At one point all pretense of reading a script vanishes as she becomes a god-like 2,000-year-old madonna commentating on the discarding of female lives. The conceit of the play and the title – The Way She Spoke — unfold in a lucid litany of story after story after story the script forces the actress to read and the audience to listen to, leading the actress to confront the male playwright about why he has asked her, a woman, to live through his memories, research and anguish.

The actress, also a Chicago drama teacher, Michelle Lopez-Rios is astonishingly fluid and articulate, making every nuance of two languages clear to an English-speaking audience, engaging in precise and passionate oral interpretation reading the script and then with powerful vocal characterization becoming the character speaking.

While I cannot fault how well she does this, we are always aware, given the circumstances, that this is an actress doing it. The problem is built into the devices, again and again using the artifices of the presentation to try and punch through to the genuine feelings the actress and the playwright clearly have. Referring back and forth to the script may be one of those devices that work better in live theater.

Director Lisa Portes has made smart choices on where we should look, but these are her choices. Sometimes we would prefer to make our own choice in going in for a closeup or locking into a long shot – because unlike a movie we know this is a stage piece and our emotions and intellect control where we look.

And we might like at times to pause more among the projection designs of Julie Ahlgrim (are those paintings of actual victims?) or the scenic creation of a theatrical workspace by Stephen Hudson-Mairet, but the eye is being told what to see. Gomez intends the devices to carry us into the heart and cruelty consuming these women – and perhaps in live theater we might not feel the controlling hands so much and could lose ourselves in this important story. Right now we admire the effort, appreciate the skill, but contemplate more than feel.