By Bram Sable-Smith, Wisconsin Center for Investigative Journalism - Mar 16th, 2021 09:53 am
Get a daily rundown of the top stories on Urban Milwaukee 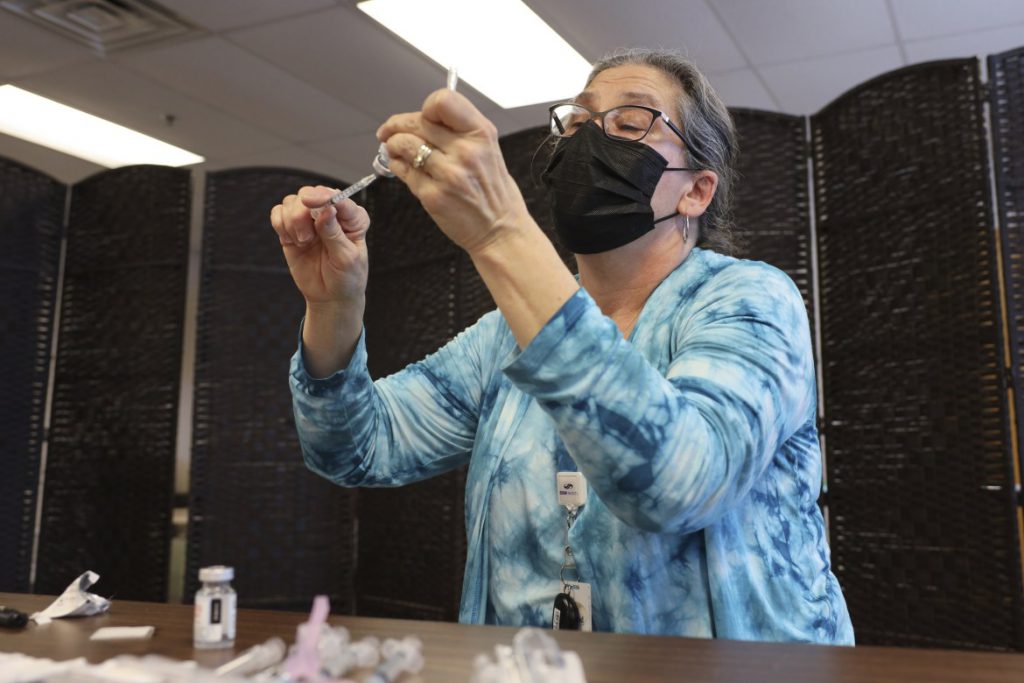 Jane Mooney, a volunteer physician assistant with the Benevolent Specialists Project, attempts to squeeze an extra Moderna COVID-19 vaccine dose out of a vial during a free vaccination clinic on March, 9, 2021, at Life Center in Madison, Wis. The Hmong Institute ran the clinic, which targeted Hmong and Southeast Asian adults 65 and older. Moderna vials are labeled as containing 10 doses, Mooney says, but vaccinators can often retrieve one or two additional doses. Forty people initially signed up to receive shots at the clinic, but nurses squeezed 10 extra doses out of vials, allowing people on a waiting list to receive shots. Coburn Dukehart / Wisconsin Watch

The figures track waste only from providers receiving doses from the state — excluding the Indian Health Service, Veterans Administration, Department of Corrections and other providers that report data directly to the federal government.

Wisconsin Watch obtained the data through a public records request. DHS did not immediately provide information about the reasons vaccine doses were wasted.

Providers at 167 sites reported losing at least one dose through February, with a median loss of five doses per site.

Ajay Sethi, a public health and infectious disease epidemiology researcher at the University of Wisconsin-Madison, called those figures impressive.

“We’re talking two months of vaccinating,” he said. “Five as a median, that’s like nothing.”

Wisconsin’s biggest reported incident of waste, according to DHS: An Aurora Medical Center pharmacist in Grafton intentionally spoiled more than 500 Moderna vaccine doses on Dec. 24 and Dec. 25. That episode accounted for 22% of reported vaccine losses statewide. 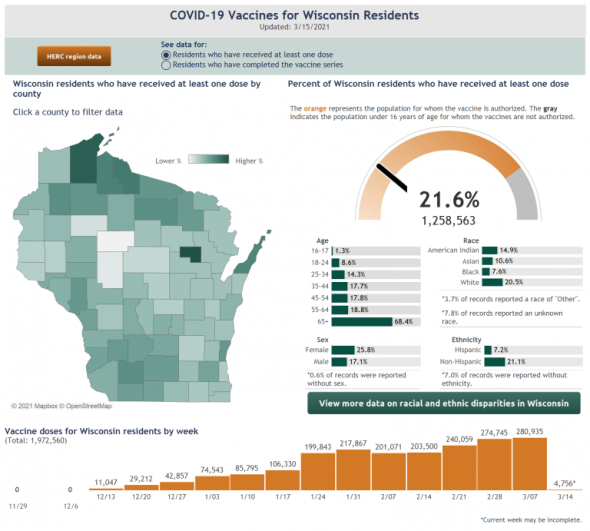 Click on the image above to see Wisconsin DHS COVID-19 vaccine data, which is updated daily.

Steven R. Brandenburg, 46, pleaded guilty in U.S. District Court for the Eastern District of Wisconsin in January to two counts of attempting to tamper with a consumer product with reckless disregard for the safety of others after admitting that he removed the doses from a refrigerator. The U.S. Department of Justice says that on Dec. 26, 57 patients received vaccinations from the batch, which may have been rendered inert or dangerous.

Aurora Medical Center reported losing 518 doses that week, along with four additional doses two weeks later — its only losses through February, according to DHS.

According to his plea agreement, Brandenburg ascribed to various “conspiracy theories” and was skeptical of “vaccines in general and the Moderna vaccine specifically.” He has not yet been sentenced.

Other Advocate Aurora Health facilities sit near the top of Wisconsin’s list for wasted or spoiled doses — with many of the losses earlier in the vaccination rollout. Those include: Aurora BayCare Medical Center in Green Bay (191 doses), Aurora St. Luke’s Medical Center Covid Clinic in Milwaukee (102 doses), Aurora Medical Center Hartford in Washington County (52 doses).

“Since the isolated incident at Grafton in December and like many other providers who experienced early challenges extracting a sixth dose from Pfizer vials, we’ve significantly improved our efficiency,” Advocate Aurora Health told Wisconsin Watch in an emailed statement.

Advocate Aurora Health facilities have administered more than 138,000 COVID-19 vaccine doses in Wisconsin, according to the statement, which added: “We’ve also implemented a program to review unused doses daily and ensure safeguards to minimize waste.”

Providers elsewhere also reported lost doses, including 140 at HSHS St. Nicholas Hospital in Sheboygan. That happened overnight on Feb. 8 when someone unintentionally left 28 vials of Pfizer’s COVID-19 vaccine outside of a refrigerator, a spokesperson said in an emailed statement.

“HSHS St. Nicholas Hospital firmly believes this situation was a result of human error and not intentional,” the statement said. “The hospital has taken this incident very seriously and used it to improve processes and put additional measures in place to ensure it will not happen again.”

UW Health in Madison reported 98 doses spoiled or wasted at its locations through February.

“Out of 58,000 doses received, we have already administered over 90 percent of them with DHS data through February showing only 98 doses not making it into patient arms,” Russell wrote in an email. 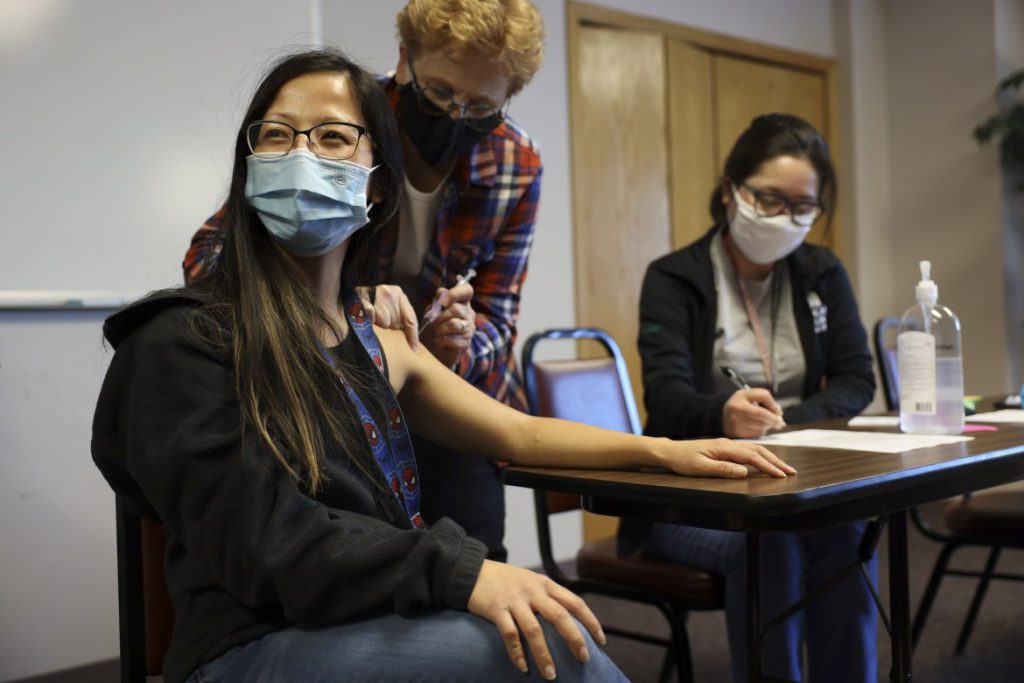 Lisa Xiong, a staff member at The Hmong Institute, gets her first dose of the Moderna COVID-19 vaccine at a clinic at Life Center in Madison, Wis. on March 9, 2021. “It wasn’t as bad as I thought,” she said after Laurel Losenegger, a volunteer nurse with the Benevolent Specialists Project, delivered the shot. Coburn Dukehart / Wisconsin Watch

Directly comparing Wisconsin’s record on vaccine waste to other states is difficult, because most do not uniformly track the data or publish it in real-time.

Minnesota officials reported just 320 total ruined doses earlier this month out of roughly 1.7 million administered at the time, while Illinois reported 526 lost doses out of the 1.9 million it administered statewide, according to media reports.

In Michigan, nearly 12,000 doses of the Moderna vaccine spoiled in January because of temperature issues while en route from a distributor. The state did not require providers to report doses lost under their care, but available data showed that 1,968 doses were reported wasted through Monday, said Lynn Sutfin, a Michigan Department of Health and Human Services spokesperson.

Vaccines can only be refrigerated for so long, and in some cases arms aren’t ready once the vials are thawed, Sutfin told Wisconsin Watch.

“In addition, reasons for the 1,968 doses of vaccine wastage included the vial being dropped or cracked; syringe malfunction; needle breaking off in the vial; and reconstitution errors,” she said.

Some vaccine spoilage is expected, Dr. Kelly Moore, deputy director of the Immunization Action Coalition, told NPR this month. Even states reporting larger waste tallies — such as Tennessee, which lost nearly 5,000 doses in February alone, and Florida, which lost more than 4,000 doses as of Feb. 9 — are reporting losing less than 1% of shots administered.

”You want to see some waste, because that means people are paying attention and that real world accidents happen and that they’re being responded to properly,” Moore told NPR. “You just don’t want to see negligence.”

Managing Editor Dee J. Hall and Investigations Editor Jim Malewitz of Wisconsin Watch contributed to this report. Bram Sable-Smith is WPR’s Mike Simonson Memorial Investigative Fellow embedded in the newsroom of Wisconsin Watch (www.wisconsinwatch.org), which collaborates with WPR, PBS Wisconsin, other news media and the University of Wisconsin-Madison School of Journalism and Mass Communication. All works created, published, posted or disseminated by Wisconsin Watch do not necessarily reflect the views or opinions of UW-Madison or any of its affiliates.