The Early Germans From Cologne

And their Milwaukee settlement. Excerpt from a new book, ‘Germans in Milwaukee: A Neighborhood History.’

By Jill Florence Lackey and Rick Petrie - Mar 4th, 2021 10:26 am
Get a daily rundown of the top stories on Urban Milwaukee 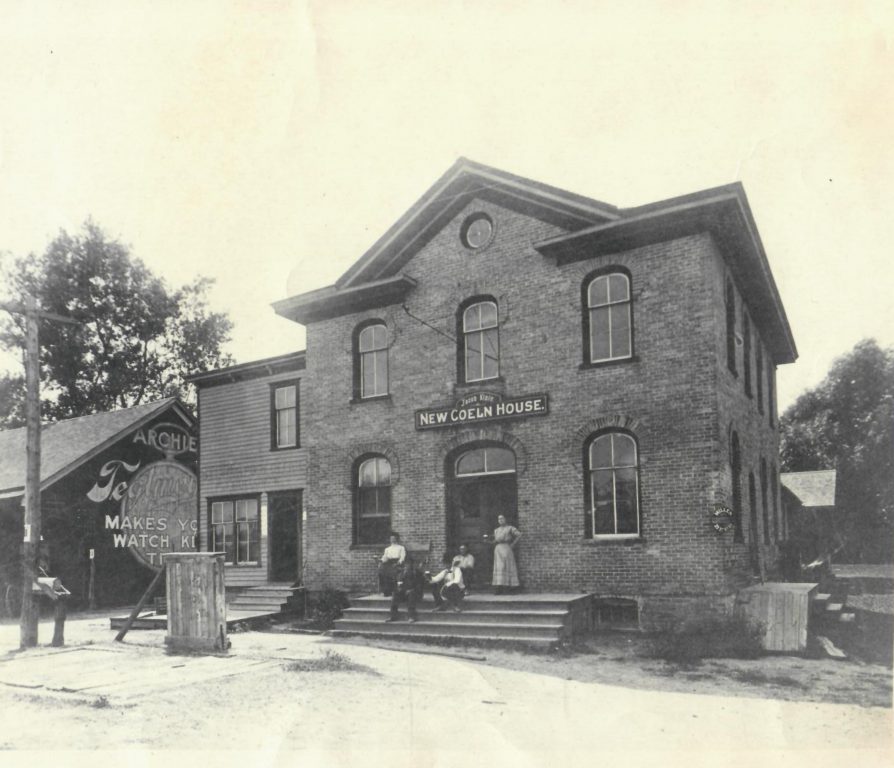 In the early 1840s a group of mainly Catholic German immigrants from the rural areas around the Rhine River and Cologne (German Köln) acquired homesteads on heavily forested Wisconsin lands ceded by the Potawatomi Indians. Their original settlement became a farming hamlet on Howell near today’s College Avenue. They called their hamlet New Coeln (or New Köln). The region where they settled had just been designated the Town of Lake by the Territory of Wisconsin, and would later be annexed to Milwaukee and become the neighborhood of New Coeln at the edge of Milwaukee Mitchell International Airport on the city’s far south side. By 1847 the hamlet had approximately 50 settlers and a new Catholic parish.

Situated among the farm acres of the German immigrants was a privately owned log cabin that was originally used for celebrating Mass once a month. Once settled, the landowners contributed logs for the construction of a formal church that was completed in 1847. By 1850 they added a rectory and school. The community named its parish St. Stephen’s Catholic Church after St. Stephen, the first martyr of Christianity. In 1884 the parishioners rebuilt the church.

But St. Stephen’s Catholic Church would experience a long chain of tragedies. It burned down on May 13, 1908, was reconstructed, and again burned down on January 1, 1926—this fire overcoming both church and rectory. Yet again the hardy German settlers voted to rebuild. The new church, with an altar and sanctuary carved from Slovenian white oak, survived another fire in 1979—this time due to arson.

Despite its great persistence, St. Stephen’s Catholic Church eventually moved. Over the years, it had become a more diverse metropolitan parish and found itself engulfed in airport expansion and competition from nearby churches. Under pressure from the Archbishop to close, join another parish, or rebuild in Oak Creek (a suburb just south of Milwaukee), the parishioners chose the latter. No longer a pillar of its original New Coeln community, the Oak Creek church broke ground in 2008—but again not without misfortune. A month prior to its opening, lightning struck the bell tower. The church once again survived and was formally dedicated in November of 2009.

But returning to the early New Coeln neighborhood, the German settlers continued farming, and did so well into the late 20th century.

The Deusters, the New Coeln House, and Smart Horses

St. Stephen’s Church in 1912, after the rebuilding following the 1908 fire. A later version of the church still stands in Milwaukee’s southern suburb of Oak Creek. Milwaukee Archdiocese.

The Deuster family played an important role in the New Coeln settlement. Emigrating from Germany in 1844, they arrived in the United States and purchased acreage in the Town of Lake. Among their neighbors were the Bower, Klein, Platt, Eppenech, Kebler, and Lentz families. While most of the German settlers were Catholic, some, including the Kleins, were Lutherans. John Klein was an organizer of St. John’s Evangelical Lutheran Church in 1850. Like St. Stephen’s, this parish later moved to Milwaukee’s southern suburb of Oak Creek.

The patriarch of the Deuster family was John Hubert Deuster who was born in Germany in 1812. He married Anna Barbara Eppenech Deuster, and the couple had seven children. John Hubert Deuster was a key player in the founding of the first St. Stephen’s Catholic Church. He not only contributed building logs, but he also donated a five-acre tract of his own land for its construction. Census records indicate that many of the Deusters worked as tailors as well as farmers.

The Deusters also played an important role in the development of another New Coeln institution. Originally called the New Cologne House, the Italianate-inspired saloon was built in the late 1840s. It originally functioned as a weighing station and inn for farmers traveling between Racine and Milwaukee counties. Stories circulated that many Racine farmers, who imbibed too much beer in the saloon after selling their produce in Milwaukee, fell sound asleep in their horse-drawn wagons on the way home to their farms. Fortunately, as the tales go, the horses knew the routes of their sleeping masters and were able to deliver them safely home. Other stories circulated over the years that the inn had become a brothel, was haunted, and served as a pharmacy for “quack medicine” on its second floor.

The Coeln House underwent many name changes over the years, including the New Cologne House, New Coeln House, New Coeln Housdance Hall, and Deuster’s Saloon. Between the late 1860s and well into the 20th century, the Deuster family ran the inn. Joseph Deuster, son of John Hubert Deuster, maintained the establishment for decades. Born in Germany in 1835, he’d married Addie, had children, and owned a farmhouse on Clinton Street (today’s South First Street). U.S. Census records show him still managing the saloon as a widow in 1900, with several of his grown children remaining at home. His oldest son Robert took over the bar from him. Joseph Deuster died in 1914 and is buried at Holy Trinity Cemetery.

Today the original saloon is still in operation in the New Coeln neighborhood, at 5905 S. Howell Ave. Known as the Landmark 1850 Inn, it is Milwaukee’s oldest functioning tavern.

Dogged Perseverance In the Face of Change

The New Coeln settlement was one of the most stable in Milwaukee’s history. Among the German informants in Urban Anthropology’s 12-year study of Milwaukee ethnic groups were several descendants of the original emigrants from the Cologne area. They described the unwavering nature of their ancestors and their community.

“My great-grandmother spoke nothing but German. . . She was dead before I was born, but my mom said she was an old German woman, and she refused to speak any English. She was born German, and she came over here, and she was going to speak German until the day she died.”

“They came from Cologne, although they were farmers so I doubt if they actually came from the city. They must have come from the outlying areas. . I believe it was my great, great, great-grandfather. He made the decision that everyone was going. So, there was no say in that with anybody else. He told everybody that was related to us that we’re going to America. This is where we’re going, and we’re going to farm there. Essentially everybody that we knew packed up and came over here and settled. . .  It had something to do with the lack of land [in Germany], and the rising prices, and that it was a lot cheaper over here.”

“Well, up until my generation they were all farmers. And they also raised pigeons. They ate them. So, they raised a lot of pigeons for themselves and then they had like their own little garden plots where they’d get some of their stuff. But mostly it was just farming. Corn, basically. And, I guess recently now we’ve gone to more like a service-industry-type thing. Yeah, I guess like everyone else in the population. Actually, my sister’s the first one not to be born on a farm. So, I still come from the farm.”

However, change was inevitable for the German community. In marched Milwaukee Mitchell International Airport and a myriad of highways. The drive for 20th century transportation systems in New Coeln transformed the German farmlands into runways for planes and wide bands of concrete highways for vehicles. As late as the 1970s, some descendants of the original German community remained on their land, including members of the Duester family. A Milwaukee Journal article in 1976 described their frustrations over exhaust fumes from the airport polluting their farm lands, brown rain, and vibrations from the planes and traffic interfering with their sleep. Ultimately most of the descendants of the original New Coeln community found new homes.

Excerpted from Germans in Milwaukee: A Neighborhood History, by Jill Florence Lackey and Rick Petrie. Copies of the book can be purchased here.