‘The Island’ Still Packs a Punch 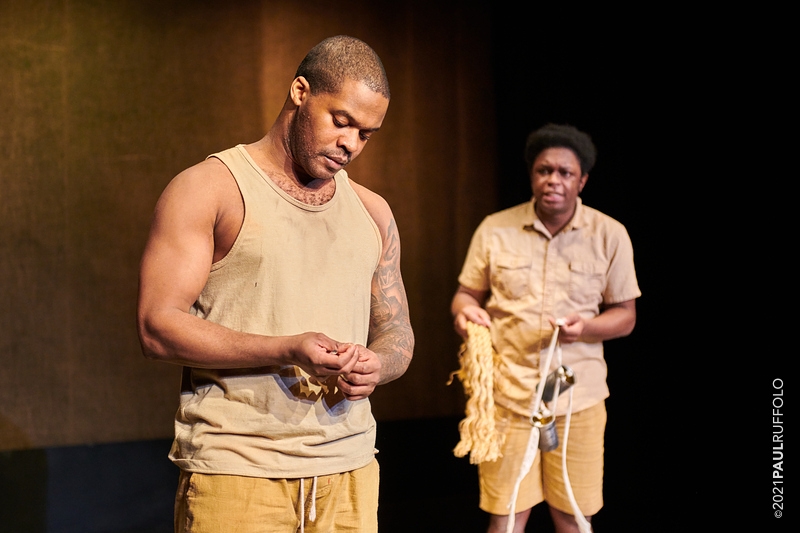 The Island. Photo by Paul Ruffolo.

Some 47 years ago striking at the heart of apartheid, a short play called The Island was put together by Athol Fugard, who has since emerged as South Africa’s leading playwright, and the actors/writers who performed the roles to great acclaim, John Kani (still performing in movies like Black Panther) and the late Winston Ntshona.

The pedigree is important because the play and its searing language still are – as contemporary as the headlines of what is happening to dissidents in Russia and to parents and children on the southern US border.

The care they have taken is made clear on your home computer screen in the intimacy of the acting and the raw emotion and intriguing pauses and timing imposed by Chicago-based director Mikael Burke.

The full understanding and weight of the play doesn’t hit the company for the first few minutes when the actors labor a bit too hard to provide the grunts and pantomime of hard labor for two convicts enduring demeaning animalistic treatment by day while rehearsing at night for fellow prisoners using an old Greek tragedy, Antigone. It is about a sister sentenced to living death for burying the rebellious brother whose body King Creon wanted left to the mercy of vultures. Right away, the idea of man confusing his role with God’s hovers in the story.

There is a lot of humor as John (Sherrick Robinson) is forced to wear a wig made out of rope and tin cans as breasts to play Antigone, while he and Winston (DiMonte Henning) try to poke fun at the hardships forced on them and escape into the imaginary lives they have invented to survive.  And then Winston finds out he is going to be released while John faces eternal prison.

Elation, gloom and grim reality ensue. It is like a musical aria between doomed friends, Robinson in tenor anguish while Henning, the usual instigator, is now full of sheepish confusion. The actors grab us in these   pivotal moments, making us forget that we are limited in our response to their pain by the computer screen. There is nowhere to go with how we feel at the end — something else we will have to miss until the full weight of theater returns. But for a production of this quality, we’ll endure it.