Will Budget Hearings Be Superspreader Events?

By Melanie Conklin, Wisconsin Examiner - Feb 27th, 2021 05:42 pm
Get a daily rundown of the top stories on Urban Milwaukee

Imagine if this were the Legislature’s policy for its meetings: “The wearing of pants is highly recommended, but it is not required.”

In an attempt to show how ridiculous it is during a pandemic to refuse to wear a mask in the Legislature, where men are required by dress code to wear suit jackets, Rep. Lisa Subeck (D-Madison) inserted the word ‘pants’ to replace the word ‘masks’ in the legislative policy on masks made by Republicans.

She laughed at the result, but as she sees it, the existence of a dress code for legislators proves requirements have nothing to do with ‘freedom.’ And masks have become another huge point of contention where plenty of battles already rage between Republicans and Democrats.

Making masks optional in the Legislature nearly a year into a pandemic that has killed more than 500,000 Americans and more than 6,000 Wisconsinites not only belies the advice of the medical community, it puts everyone in every community where legislators live and travel at risk while more contagious variants of the virus are beginning to spread throughout the state.

“Let’s not let this spiral out of control to where these new variants ended up spreading in our communities, faster than we can get people vaccinated — that’s definitely a concern,” Subeck says.

Both the Senate and Assembly have the technology to accommodate virtual participation. In the state Assembly, members are forced to be present in person if they wish to participate, while many of their colleagues refuse to wear masks. Some even brag about it.

Up until last week, the state Senate had been more accommodating. Legislators were permitted to attend meetings virtually — an option that was eliminated for the most recent session after a number of Republicans complained. However, despite nearly every Democratic senator pleading their GOP colleagues to put on masks, those complaints have not led to any policy change.

The state budget was introduced on Feb. 16, an action that sets off one of the busiest and most crowded seasons at the Capitol, with months of packed hearing rooms, caucuses and floor sessions. Two days after Evers introduced the budget, 105 groups wrote to the Joint Finance Committee chairs urging them to allow virtual participation and other COVID-19 accommodations for members of the public and organizations that want to testify and highlighting that the public should have the opportunity to inform the budget process.

“Because of the known risks with large public gatherings due to Covid-19 and the uncertainty about when it will be safe for all members of the public to attend, we as member-based organizations cannot in good conscience encourage our members to risk their health to attend large public hearings,” the letter stated. “While we represent far ranging and diverse populations, we are united in wanting to make sure that every person who wants to participate in the JFC hearings, and other legislative hearings this session, can do so safely.”

Subeck wishes her Republican colleagues would think beyond the safety of elected officials. “As much as I am concerned about myself and my colleagues, I’m also really concerned about the number of staff members, members of the public and members of the press who are being exposed,” adds Subeck. “Every time there is a committee meeting — it is not just a bunch of legislators in the room.”

Legislators have options that include going to their offices and watching on Wisconsin Eye or listening over the Legislature’s squawk boxes in offices. “But the pages from the Sergeant’s Office don’t have that luxury,” says Subeck. They have to be in that room. There are Legislative Council staff who have to be sitting up at that table, sometimes next to an unmasked legislator.”

Although the science affirming the importance of mask wearing to prevent the spread of COVID-19 has been a long-settled medical question over the course of the pandemic, many Republican legislators insist it is a personal decision. On the Senate floor recently, Sen. Alberta Darling (R-River Hills) wore a mask, but said she would never consider telling her other Republican colleagues to put one on.

A number of rules confine legislators and they rarely, if ever, lead to a discussion of personal rights and freedoms: Legislators are not allowed to address one another during floor speeches (they may only address their comments to the chair). They are not allowed to read from a printed document without permission, and both houses have a dress code to establish professionalism.

Are Republicans breaking the law?

The current policy in the state Legislature is that masks are not required. While all Democrats are wearing at least one mask in all meetings, many Republican legislators choose not to do so.

The Legislature’s policy may be illegal, writes Larry Gallup in a Wisconsin Freedom of Information Council column, as a violation of the state’s open meetings law.

“To keep each other safe, we’ve been asked to add barriers — distance and masks — to our face-to-face interaction,” writes Gallup, the digital news director for USA TODAY NETWORK- Wisconsin. “We also have videoconferencing to help overcome those barriers. Yet to this day, Republican leaders in the state Assembly are holding meetings without requiring attendees to wear masks or offering a video option for those who don’t feel safe attending.” (The column was written before the Senate took away the virtual option.) 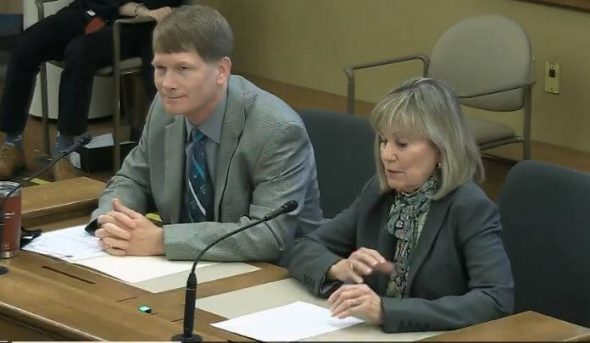 Gallup concludes that the Legislature’s current practices are not “reasonably accessible,” and adds, “No one in Wisconsin should have to put their lives at risk to attend a public meeting.”

Another measure that Republicans have tried to push through as part of a larger COVID-response bill is forcing state employees who are working remotely to return to state offices and the Capitol, which has become, many feel, an unsafe work environment due to some legislators refusing to wear masks.
After Gov. Tony Evers vetoed the partisan GOP COVID bill, the Senate separated various elements of it into separate legislation, including forcing state employees to work in person, directing Evers to submit a plan to make that happen. A memo announcing the bill, sponsored by Sen. Duey Stroebel (R-Saukville) and Sen. Mary Felzkowski (R-Irma) read, “Taxpayers deserve the government they are paying for and it is time for the business of state government to return to a more normal status.”

While the Legislature did not come into session for eight months last year, the memo pits state workers unfavorably against first responders and health care workers — and accuses state agencies of having “hit the pause button, shortening their hours of availability reducing accessibility to the public and lengthening response time,” adding that “taxpayers have continued to foot the bill.”

Some Senate committees continue to offer the option to testify and attend meetings virtually, as the Senate Judiciary Committee did on Thursday. While Assembly committees require in-person participation, the Health Committee chair — Rep. Joe Sanfelippo (R-New Berlin) — has gone out of his way to ask people to put on masks when they remove them so all members can feel comfortable attending, says Subeck, who is grateful for his efforts.

This confusion — as well as spreading of the virus — could be largely avoided with a regular mask requirement.

“It really depends on what the committee chairs decide, and that isn’t universal or being enforced,” says Rep. Francesca Hong (D-Madison). “I think it’s ultimately a failure in leadership. I shouldn’t have to walk around the halls of my workplace, trying to keenly listen for footsteps and make sure I avoid them. Working in fear is something that no one should have to go through.”

One of the more bizarre actions from an Assembly committee chair came from elections committee chair Rep. Janel Brandtjen (R-Menomonee Falls) who informed members that masks should be donned “restaurant style,” which she described as masks being left off when sitting down and put on when walking around.

Hong, a chef and restaurant owner, says ‘restaurant style’ mask use is not a thing — in fact, it belittles those who have no choice but to be around customers in the pandemic to make ends meet. “You have the decision-making power and you refuse to see people in our industry as working in dignified jobs and worthy of your respect,” says Hong. “To disregard their health, it’s inhumane and it’s disgusting.”

The National Conference of State Legislatures has been tracking what legislative bodies across the country have been doing to keep participants safe during the pandemic.

It found that many bodies have gone to great lengths to protect the health of members and others involved in the process. “Legislatures are suspending legislative sessions, limiting access to state capitols to protect the health of legislators, legislative staff and the public and exploring alternatives to physical meetings,” reads a report on its website from Jan. 2021.

And now that the Wisconsin Legislature is regularly in session, the lack of a mask requirement continues to cause division and rancor, which may only grow during months of contentious budget debate.

Count Sen. Chris Larson (D-Milwaukee), who was cut off from speaking until he put on a jacket when testifying virtually in the Senate before the rules changed, among those who were upset when he learned senators had to attend in person on Feb. 18. He tweeted this response:

“Breaking: we just got word that the state senate will convene IN PERSON tomorrow with no mask requirement. The pandemic party isn’t done denying the impacts of COVID and are continuing to deny science. It gets dumber: the senate has a requirement for men to wear jackets at all times. Violations result in removal from the chamber. But no requirement for masks.”