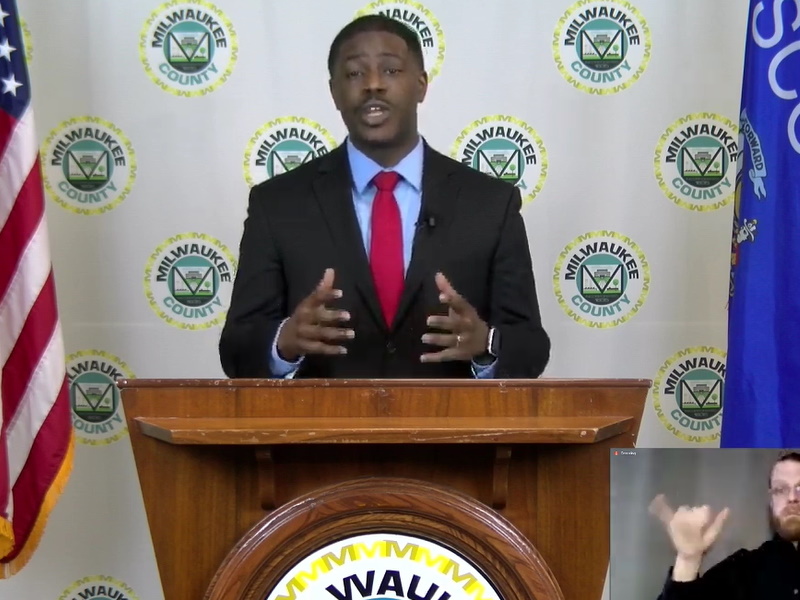 Milwaukee County Executive David Crowley delivered his State of the County address Wednesday focusing on the county’s response to the pandemic and to the ongoing efforts to achieve racial equity.

Crowley has been county executive for just over 10 months, and has spent the entirety of his tenure governing during a pandemic. The major themes of his speech and his first year in office were the pandemic and the way it is intertwined with the county’s racial equity goals.

“By now we are all familiar with the dramatic disparities highlighted by the pandemic—whether it was early data showing disproportionate cases and deaths or the current low rates of vaccination for people of color,” he said.

The “destructive forces” of racism and COVID-19 “wreak havoc each day during the pandemic,” Crowley said. “Let me be clear: if we do not address these structural problems now, we will see worsening disparities along racial lines long after this pandemic is over.”

Crowley applauded the county employees for their work during the pandemic, saying they “stepped up in big ways.” He also said that his administration’s relationship with the County Board and Chairwoman Marcelia Nicholson allowed them to “set Milwaukee County on a course of change.”

In March county government mobilized to respond to the pandemic. Over the past 10 months, Crowley has overseen the investments of millions in pandemic aids. His administration put $18 million towards homeless services and keeping residents housed, and the county now has the fewest number of homeless people on record, he said. His administration also invested in small business relief and expanding access to existing community resources for residents and families struggling during the pandemic.

Get a daily rundown of the top stories on Urban Milwaukee
Crowley announced that his administration has begun reviewing how the county can increase equity in its contracting practices “to give some of the most overlooked and undervalued small businesses a chance to succeed.” His administration has also advanced practices aimed at promoting racial equity within county government. Currently, he noted, half of the leaders of county departments are Black and half are women.

“Representation is important, not only to make sure the voices and perspectives of all our communities are heard, but also so the next generation of leaders can imagine themselves serving their community,” he said.

Crowley announced that the county was recently awarded a  $1.3 million grant from the John D. and Catherine T. MacArthur Foundation to support the county’s “efforts to rethink the local criminal justice system, safely reduce the county jail population, and eliminate racial inequities.” Including this funding, the foundation has by now invested $5.6 million into the county’s criminal justice initiatives, he said.

Crowley also discussed the redesign of the Milwaukee County Transit System, called MCTS Next. The new bus system, he said, is a way to “physically transform” the county. “We can’t force our way off the list of most segregated communities in America, but we can make it easier for all of our residents to travel throughout the county and become connected to the diverse array of opportunities that exist beyond their own neighborhood.”

Mental health in the county was another crisis laid bare by the pandemic as suicides, homicides and drug overdoses soared in 2020. Crowley said his administration invested $1.6 million of federal pandemic relief funds into mental health services. He added that the county is planning to develop a new Mental Health Emergency Center in the city of Milwaukee.

“The trend of over leveraging property taxes to pay for state mandates and local services is unsustainable for Wisconsin taxpayers and local governments,” Crowley said.

Governor Tony Evers included a provision in his latest biennial budget that, if passed, would allow local governments to hold a referendum on raising the local sales tax. Crowley has advocated for the sales tax option and said the governor’s budget provision “leaves me optimistic.”

In closing his address, Crowley implored county residents to find common ground in their shared humanity. “The fallout from last month’s tragic events in the U.S. Capital is proof that the time is now for a shift in our collective thinking,” he said.

“The most patriotic thing we can do is look at those who disagree with us and continue to see them as a human being deserving of the same opportunities and rights as everyone else,” he said.