Live music of all kinds, open mic nights, and unique food, including the "Smash Burger." 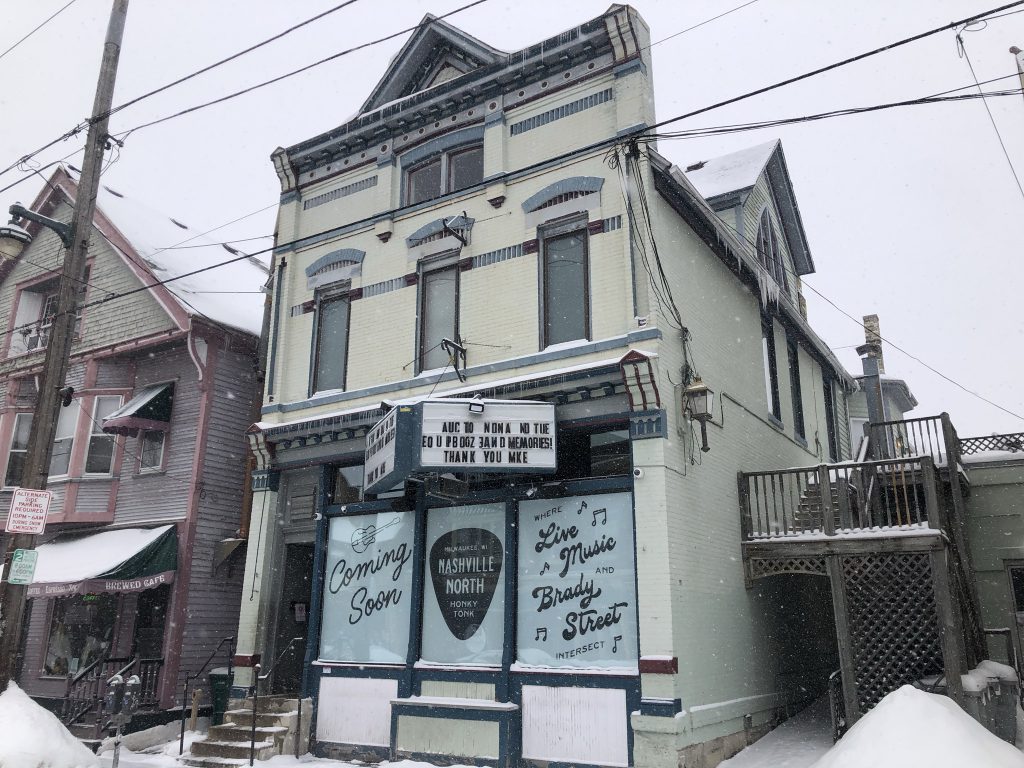 After being dark since last September, the former Up and Under Pub, 1214 E. Brady St. will become “Nashville North,” as my colleague Jeramey Jannene reported last week. “Details are scant,” he wrote, “but a large window sign makes the intention clear: a new live music venue is coming to Brady Street.”

A search of business records shows that “Nashville North, LLC,” was incorporated on November 11th, 2020 by Jeffrey Jon Marsh, using the New Berlin address of The Charcoal Grill & Rotisserie, a chain restaurant he has operated since its first outlet opened in Racine in 1996.

Marsh confirmed his connection in an email to Urban Milwaukee, and filled in some of the details of the proposed operation:

Yes, I’m the one who is taking the former Up and Under space. We are just starting the process of getting building permits & applying for our liquor license. Nashville North will be a live music venue, featuring all types of music genres. We will have open mic nights, a featured house band. If you have been to Nashville you would find the same…. I currently own and operate the Charcoal Grill restaurant chain. We have seven locations throughout  southeast Wisconsin.

The business plan conforms in many respects to that of the original Up and Under, which featured live blues music from 1977 until 2006. (An Urban Milwaukee story covered that bar’s history.) That year the bar was leased by Timothy J. Brodersen, who shifted the focus from the blues to a broader variety of acts, many without cover charges. The Open Mic nights were a consistent draw. Brodersen left last summer, after the business closed during the pandemic.

Although a grill and $2,000 exhaust system had been installed in the tavern in 1978, cuisine was not a particular draw for the patrons. Marsh says he proposes to change that:

We will be featuring creative street food including Nashville Hot chicken, smash burgers, some BBQ and unique appetizers. We will be offering breakfast items on Saturdays and Sundays.

In 1993 Marsh was 38 and armed with a degree in hotel and restaurant management from UW-Stout when a friend’s father asked him to revive a Racine restaurant he owned that was not doing well. Marsh repositioned the business toward the family trade, and used the marketing angle of preparing food on wood or charcoal grills.

“Everybody in Racine has a Weber grill,” Marsh figured. Renamed The Charcoal Grill & Rotisserie, the firm adopted the tagline of “your official back yard barbecue,” which it uses to this day. The Milwaukee-based Char Grill, its parent company, branched out to other locations, notably in smaller markets like Burlington, West Bend and Grafton that had been “starved for restaurants,” as Marsh put it. In addition to “Family Dinner” packages, the restaurants also offer the “Smash Burger” that is promised for Brady Street. The $12 sandwich is described as “our version of your favorite custard stand burger.”

The Charcoal Grill & Rotisserie locations are customized and freestanding, bathed in parking spaces and are more distinct than run-of-the-mill strip mall restaurants. They are considerably larger, with pre-COVID capacities of about 250, far more than the Brady Street location of Nashville North, which offers street parking only. The chain appears to have a close connection to its landlord, as its locations appear to be owned by entities connected with Wisconsin Vision Company, founded in 1978 by brothers Paul George and Andy George. It was their father, Dr. Constantine George, a Racine orthopedic surgeon, who recruited Marsh to rescue his restaurant in 1993.