We're honored and have our members to thank. 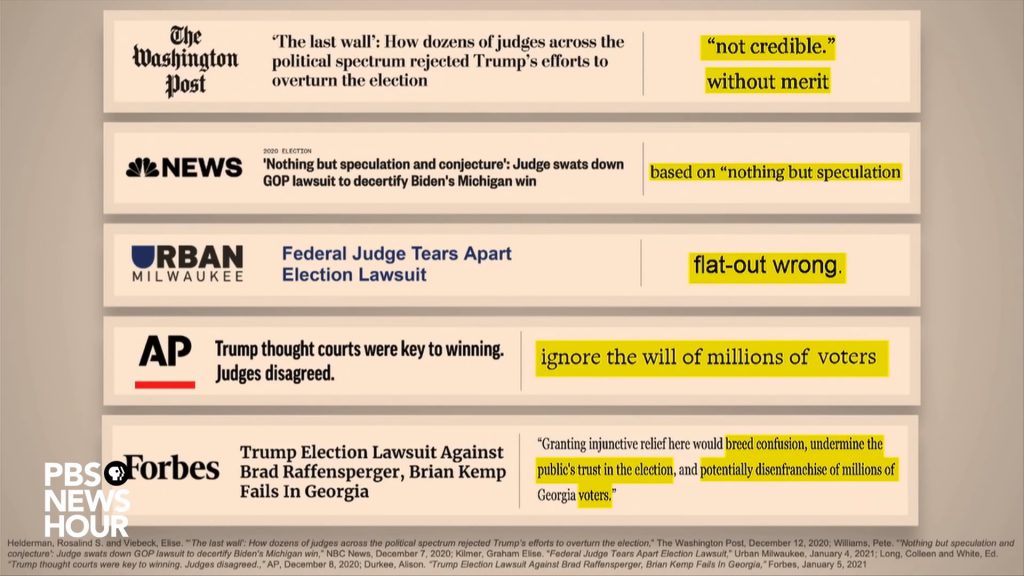 Urban Milwaukee in the impeachment trial. Image from PBS.

We didn’t expect Urban Milwaukee to be mentioned in the impeachment trial, let alone three times. But that’s exactly what happened last week and we have our members to thank.

Castro was ticking off a list of cities where Trump supporters held “stop the steal” rallies, including Philadelphia, Atlanta, Detroit and Milwaukee, and a prepared graphic showed a headline from each city. “This was dangerous, it was scary and it was a blatant act of political intimidation,” said Castro. “President Trump’s months of flaming and inciting his supporters had worked.”

The November 5th Urban Milwaukee headline, “Stop the Steal Protest At Central Vote Site,” doesn’t point to an article, but to a piece of social media content embedded in our website. It reflects the growth of our organization and an expanded capability to cover breaking news.

This past summer, when thousands of protesters marched in the streets, we rapidly deployed a software update to our site that allowed us to integrate social media content alongside articles and press releases. The change was part of an effort to enable real-time coverage of fast-changing events. The tool allows us to merge on-the-ground reporting with content produced in our virtual newsroom. The expanded coverage is funded by an increase in our paying members.

We used the new functionality to cover the election, including into the wee hours of the morning when the City of Milwaukee submitted its absentee vote totals and gave Joe Biden a statewide lead. Trump attacked the late-night total changes as fraud, triggering protests across the country.

By the evening of November 5th, the day after the election, we were able to share a social media post from State Rep. David Bowen that showed pro-Trump protesters gathered outside of the city’s central count site before our own reporter was able to arrive on the scene.

The Democrats seized on the headline, merging it with news media accounts from across the country.

Then it happened again.

A series of headlines were shown, this time about Trump’s election lawsuits.

“Federal Judge Tears Apart Election Lawsuit,” an Urban Milwaukee headline from January 4th, was one of five shown alongside headlines from the Associated Press, Washington Post, Forbes and NBC News.

The article, written by Graham Kilmer, quoted a judge dismissing the Trump allies’ case. “Flat-out wrong,” said the judge about the plaintiff’s central contention. It was one of many articles we wrote as Trump allies filed and lost a number of elections following the election.

U.S. Rep. Madeleine Dean (D-Pennsylvania) read off quotes from each article, including the “flat-out wrong” line from Urban Milwaukee’s piece.

Again, our members are to thank. Kilmer joined our team full time in June. His position is entirely funded by an increase in the number of paying members.

It happened one last time on Thursday, February 11th. U.S. Rep. Joe Neguse (D-Colorado) re-used the Stop the Steal headline as part of a larger narrative about how Trump had been priming his most radical supporters for an event like the January 6th Capitol insurrection.

Urban Milwaukee never had a goal to generate national buzz, and our focus remains steadfastly on Milwaukee and the issues affecting our city. But we’re thankful and honored for the recognition.

We thank the over 1,500 people who have voted with their wallets for the future of independent journalism and Milwaukee. And we welcome those of you who are coming aboard next. Join today.