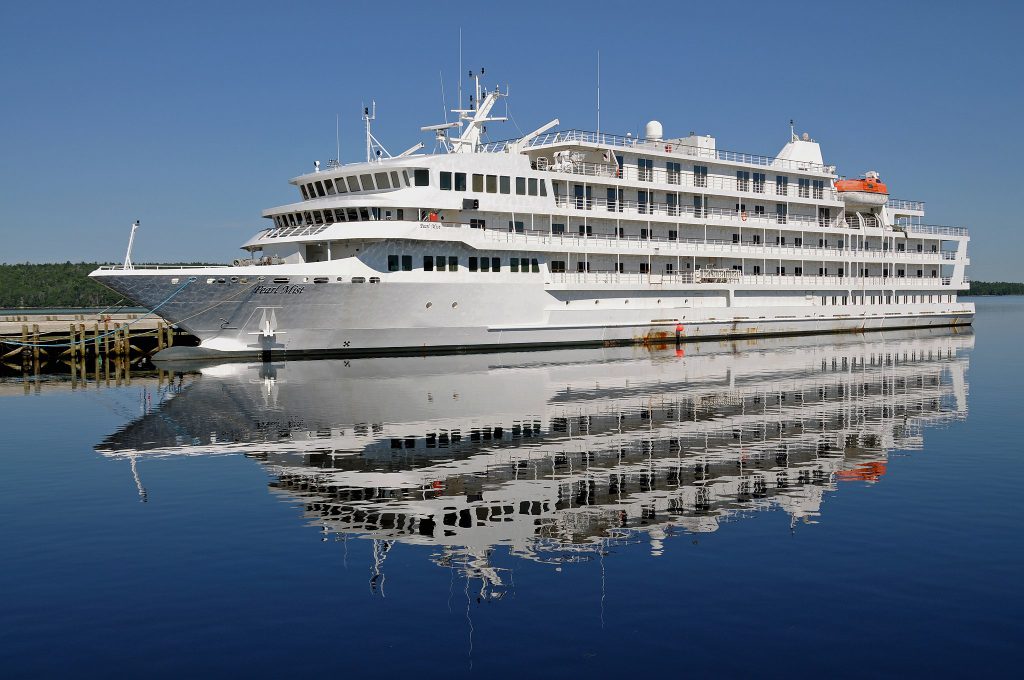 The Pearl Mist before placed into service. Photo by Dennis Jarvis from Halifax, Canada [CC BY-SA 2.0]

Port Milwaukee officials had hoped that at least some number of Great Lakes cruises could occur this year, given the smaller ship sizes and COVID-19 vaccine rollout. But the Canadian government and an 1886 United States law are likely to close the door on any cruise business on the Great Lakes in 2021.

The city and other Great Lakes ports have seen a surge in cruise ship interest, with Milwaukee in particular landing desirable turnaround service where ships start and finish their voyage, doubling the number of passengers and possibly extending stays. Port Milwaukee expects to have thousands of passengers annually visit the city in the coming years.

“As of now we have not received any cancelations for the 2021 cruise ship season,” said port development representative Jazmine Jurkiewicz to the Board of Harbor Commissioners on Thursday. But that’s likely to change.

Transport Canada, the Canadian department of transportation, banned any cruise ship arrivals in Canadian ports through February 28th, 2022. Great Lakes cruises alternate between American and Canadian ports on their journeys.

Simply dropping Canadian cities from the itineraries isn’t likely to work because of the Passenger Vessel Services Act. The law, a protectionist trade measure, requires all trips between US ports be made on American-made vessels.

The primary ships transporting passengers in the Great Lakes are foreign vessels who avoid the requirement by including Canadian stops in their itineraries. The two American-made vessels, the Grande Mariner and Grande Caribe, are up for sale as the pandemic forced Blount Small Ship Adventures to cease all operations. They are the smallest cruise ships on the Great Lakes with a capacity of approximately 100 passengers each.

“We all know the world is in flux,” said commissioner Claude Krawczyk.

Large cruise ships with thousands of passengers and substantial on-board amenities were the subject of many early media reports regarding the pandemic. But Jurkiewicz said the Great Lakes ships are substantially different and could still function with precautions.

Get a daily rundown of the top stories on Urban Milwaukee
Alderman Mark Borkowski, the council’s representative on the commission, pointed out that whenever cruising does return there will be pent-up demand. The 2020 trips were postponed and those individuals will be rebooked on future trips.

The City of Milwaukee signed a 20-year lease agreement with Pearl Seas for priority access to use the city’s marquee cruise ship dock at Pier Wisconsin.

Viking Cruises, in early 2020, announced it would enter the Great Lakes market and bring 8,000 passengers a year through Milwaukee starting in 2022. Jurkiewicz said that is continuing as planned. The first of Viking’s new ships, Ocantis, was “floated out” in December. The test proves the ship’s seaworthiness and allows interior build-out on the 378-passenger vessel to commence.

The Canadian restriction also will impact Alaskan cruises, which is resulting in the state’s congressional delegation “exploring all potential avenues” to salvage the business.

CORRECTION: An earlier version of this article referred to the US law as the 1920 Jones Act. It is the 1886 Passenger Vessel Services Act that ultimately restricts passenger travel on foreign vessels.

One thought on “Transportation: Canada, Not COVID-19, Could End Great Lakes Cruises in 2021”