While state Republican candidates outperformed Trump. A problem for both parties.

The pattern of votes in Wisconsin Assembly districts — both for US president and state representatives — present challenges for Democrats and particularly for Republicans.

The graph below shows the vote margin that the Democratic candidate received in each Wisconsin Assembly district. Shown are the results in two races: the contest for the Assembly, shown in green, and that for the presidency, shown in orange. I calculated the margins by subtracting the vote for the Republican from that of the Democrat and dividing the difference by the sum of the two votes. Thus, these margins ignore third parties and write-in votes.

I then sorted the districts according to increasing Democratic margins in the Assembly elections. In the lower left-hand corner are districts where no one ran as a Democrat, so that the Republican won 100% of the two-candidate vote. In the upper right are districts in which there was no Republican candidate.

I used a secondary sort on the presidential candidates to break ties on Assembly races—those which were not contested and only one party’s candidate was on the ballot. For example, the spike on the left is District 84, with no Democratic candidate and which Joe Biden lost by a margin of 6.8%. Likewise, the downward spike on the right is caused by Assembly Districts 7 and 20, which both lacked a Republican candidate and gave Biden a 22% margin. 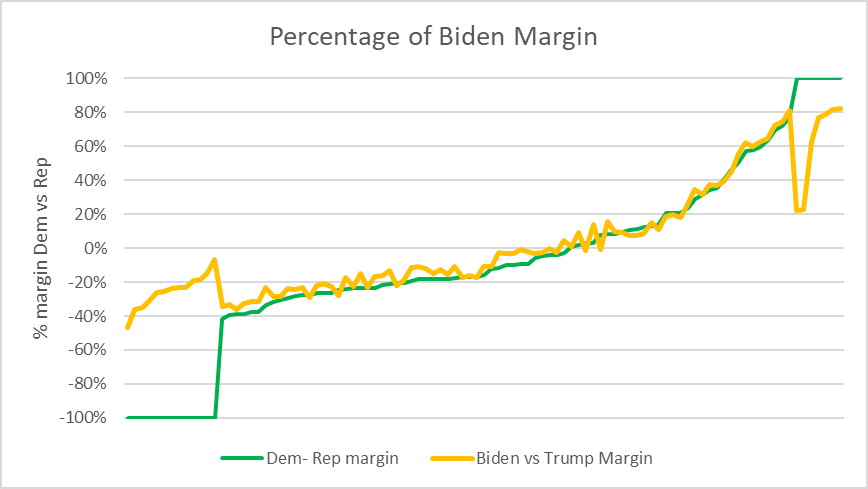 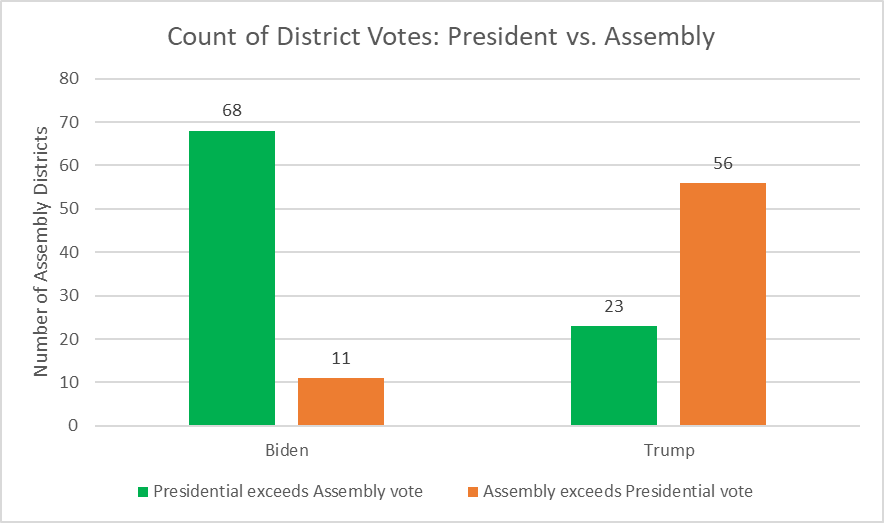 On average, 406 people who voted for the Republican district candidate did not vote for Trump in each of the 79 districts represented by both major parties. This suggests that Trump may drive away a small, but significant number of potential Republican voters.

It is worth remembering that last November’s election, from which these data come, preceded Trump’s post-election attempts to reverse the voting outcome by any means possible and his encouragement of the mob attack on the U.S. Capitol. It seems likely, therefore, that Trump’s effect on voters would have grown even more negative than before.

Thus, the Republican Trump challenge. It has been widely noted that the Republican party’s leaders seem to have splintered into three groups. The first is the base of adamant Trump supporters with a cult-like belief that he can do no wrong, and a willingness to attack anyone who dares to cross him. The second are people who may disagree with Trump but fear his base, which can take their vengeance by supporting primary challengers or sit out the general election. Finally, there is a much smaller group that is willing to challenge Trump and take their chances with his vindictiveness.

All is not good news, however, for Democrats in Wisconsin. It has been widely reported that Wisconsin’s gerrymander, particularly if allowed to continue after this year’s redistricting, makes it hard for Democrats to take control of the Legislature, even if they gain most of the votes. These data point to additional challenges for Democrats.

Especially because Biden won Wisconsin by slightly more than 20 thousand votes, this suggests that there were more votes for Republican Assembly candidates than for Democrats. The next table shows the total votes for each party calculated three different ways. The difference depends on how the 20 districts with only one candidate are treated:

As the table shows, all three methods point to the conclusion that Republicans had more votes for Assembly candidates than did Democrats. Democrats are fielding candidates who are less attractive to voters than Biden was.

These data suggest that both Democrats and Republicans have serious challenges.

For Democrats, the challenge is winning back voters outside metropolitan areas. The solution is to concentrate on issues that resonate with Wisconsin voters outside the major cities.

The issue for Republicans is more complex—how to handle Trump. It is quite likely that Trump, a highly vindictive man, will spend the next four years trying to get revenge against those people, particularly Republicans, who have crossed him in the past four years. Is there any way the Republicans can lose Trump without losing the voters in Trump’s cult?