By Melanie Conklin, Wisconsin Examiner - Feb 4th, 2021 12:11 pm
Get a daily rundown of the top stories on Urban Milwaukee 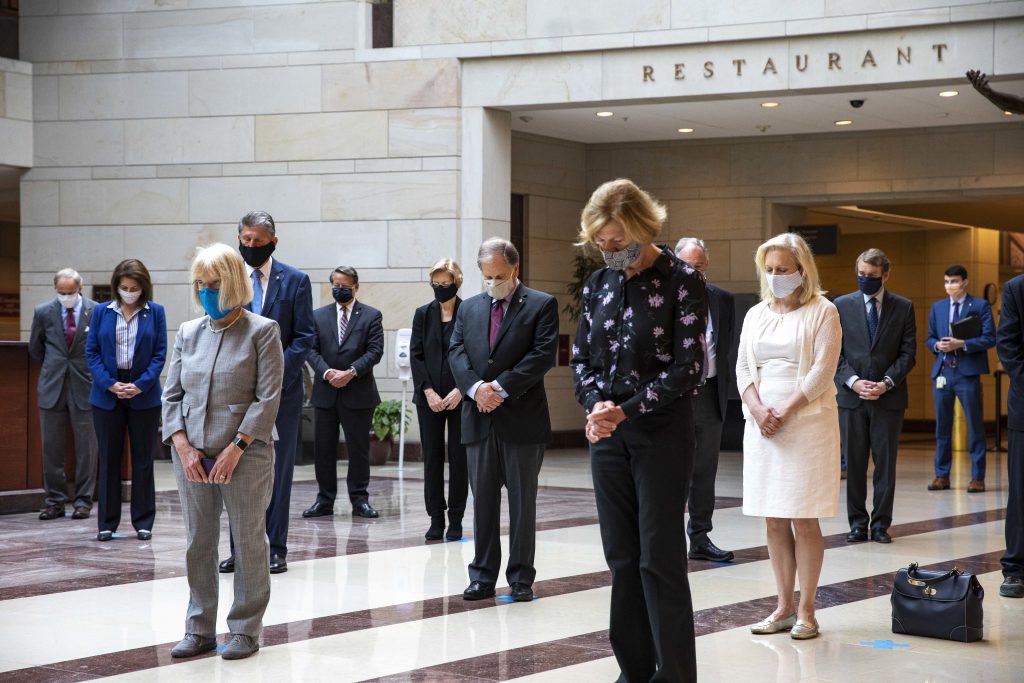 Sen. Tammy Baldwin joins other Senate Democrats in a moment of silence for 8 minutes and 46 seconds Thursday morning, June 4, 2020 in Emancipation Hall to commemorate the lives of George Floyd, Ahmaud Arbery, and Breonna Taylor. Photo by Senate Democrats (CC BY 2.0)

After paying her respects to Capitol Police Officer Brian Sicknick, who was lying in state in the Capitol because he died after working to protect the Capitol during the Jan. 6 riot, Wisconsin Sen. Tammy Baldwin announced she has joined her Senate colleagues in introducing a resolution that is “Expressing the sense of the Senate on the imminent and pervasive threat of domestic terrorism, violent white supremacists, neo-Nazis, anti-government militias, and dangerous, fringe conspiracy theories to the democratic institutions and values of the United States.”

She noted on Twitter that she welcomes bipartisan support.

I have signed my name in support of this Senate resolution condemning white supremacy and we welcome support from Senate Republicans. https://t.co/zMispYnMjy

It also specifies that items to be investigated include the leaders, recruitment tactics, use of social media, targeting, financing and any coordination with foreign military or other actors.

Wisconsin’s other senator, Republican Ron Johnson made no mention on social media of having paid his respects to Sicknick, focusing instead on criticizing Hunter Biden and the rest of the Biden family and what he labeled censorship on YouTube.

But former presidential advisor Dick Morris, the man Johnson said first inspired him to run for office after hearing him recruit Republican candidates on FOX, labeled having Sicknick lie in honor a cynical ploy according to Newsmax. The report stated he compared it to what “Nazis did with the 1933 Reichstag fire in Berlin, Germany, using it as a pretext to curb civil liberties and consolidate power.”

There is no mention of the event on Johnson’s website either, although he does note of having joined in a show of  bipartisanship with his vote to confirm President Joe Biden’s Secretary of State Antony Blinken, saying, ““Elections have consequences, and I believe any president should be able to staff their administration with people that agree and are compatible with them.  Even though I may not agree with President Biden and his pick for Secretary of State on some past, present and future foreign policy issues, I voted to confirm Mr. Blinken.”