By Wisconsin Democracy Campaign - Jan 30th, 2021 12:14 pm
Get a daily rundown of the top stories on Urban Milwaukee

Four fundraising committees used by legislative leaders to milk special interests for campaign cash spent a record $12.11 million in the 2020.

The spending blew away previous spending records by the four legislative campaign committees (LCCs) set in 2018 when they doled out $8.41 million and more than doubled the $5.64 million they spent in the comparable 2016 election year.

Spending by the Republican legislative campaign committees exceeded that of their Democratic counterparts by more than 50 percent.

Prior to 2016, combined LCC spending in a regular general election year had not exceeded $2 million (see bar chart below). 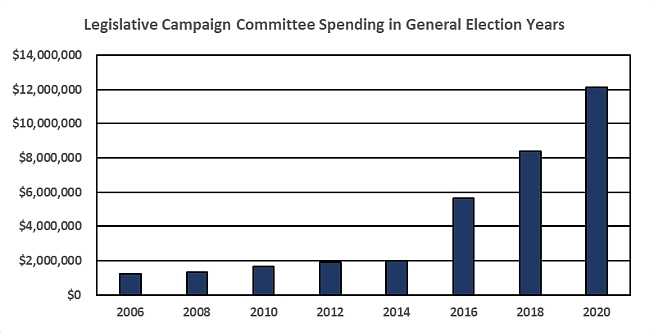 The record fundraising and spending was triggered in 2015 by sweeping changes to the state’s campaign finance laws by the GOP-controlled legislature and former Republican Gov. Scott Walker.

Topping the list of LCC spending in 2020 was the Republican Assembly Campaign Committee (RACC), which spent $5.01 million from its regular and segregated accounts and had combined cash balances totaling nearly $1.1 million as of Dec. 31.

RACC, which is run by Republican Assembly Speaker Robin Vos, has frequently been the top fundraising among the four LCCs for several years and its election-time spending has been pivotal in helping the GOP maintain control of the Assembly. Currently, Republicans control the Assembly 60-38 with one vacancy.

RACC was followed by its counterpart, the Assembly Democratic Campaign Committee (ADCC), which spent $3.14 million from its regular and segregated accounts and had cash balances totaling about $49,200 at the end of the year. The ADCC is run by Democratic Minority Leader Gordon Hintz.

The Committee to Elect a Republican Senate (CERS) spent $2.32 million from its regular and segregated accounts in 2020 and had cash balances totaling $813,775 as of Dec. 31. Republicans currently control the Senate 20-12 with one vacancy. The committee was run by former longtime GOP Majority Leader Scott Fitzgerald, who was elected to Congress last year. Fitzgerald was succeeded by Sen. Devin LeMahieu as majority leader.

The State Senate Democratic Committee (SSDC) spent $1.64 million from its regular and segregated accounts and had cash balances totaling about $806,570 at the end of the year. The committee is run by Democratic Minority Leader Janet Bewley.