Phil Spector Was a Killer

Convicted of murder, he was a troubled musical genius who transformed 1960s rock'n'roll and died of COVID-19. 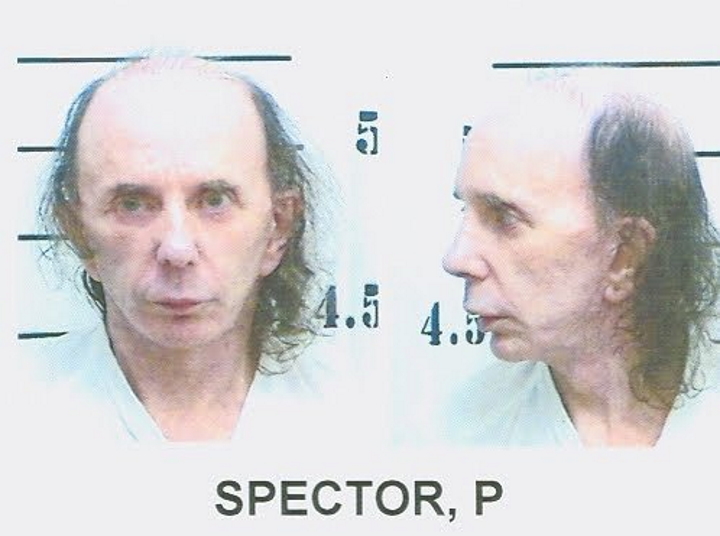 Phil Spector. Photo from the California Department of Corrections and Rehabilitation. Photo from June 10th, 2009.

Phil Spector left the planet this week at age 81, another victim of COVID-19. He invented the 60’s as surely as Bob Dylan or The Beatles and did the country a special favor by keeping the flame of rock & roll lit in the early 60’s, a time when schlock, written by parents and aimed at teens, was seen as the antidote to the too wild (and probably too black) era that preceded it. His genius as a producer inspired an even more eccentric one, Brian Wilson of the Beach Boys, to create his best work, and the string of hits Spector had with the great girl groups of that era were terrific.

Then there was his sordid personal life that ended with the 2003 murder of actress Lana Clarkson late one night at his mansion. It was a sad tale in every way, the logical conclusion of a lifelong love of guns and an isolated and paranoid lifestyle that went on behind the gates of the mansion. There’s a movie, which I haven’t seen, where he is played by Al Pacino, sporting the bizarre wigs he wore to his trial. His erratic behavior during sessions with The Ramones was a clear signal he was losing it. When John Lennon worked with him, he finally insisted there would be no more guns allowed in the studio. He was a sad, broken man more than willing to share his pain with those around him; how does someone like him make so much great music? The answer is talent — he was loaded with it.

His first success was as a teenager with his group, The Teddy Bears. Watch them sing “To Know Him Is To Love Him,” a song he wrote that borrowed the inscription on his father’s tombstone. That’s Phil on the right, playing guitar, a diminutive nebbish with a pompadour. The song has a beautiful melody (Amy Winehouse thought enough of it to cover it) and a very sophisticated key change in the bridge. So he was off to a good start.

He served a kind of apprenticeship with 50’s writers and producers, Jerry Leiber and Mike Stoller. He played the guitar solo on The Drifters massive hit, “On Broadway.” Hanging out with these two veterans set him on the path to production. His next phase would make him a millionaire in his early 20’s. It involved something called “The Wall Of Sound.”

Layering multiple guitars, keyboards, and even drums, then sweetening the mix with strings, choruses and the occasional kettle drum, the result was operatic. Spector productions were grand, emotional and decidedly teenage. “He’s A Rebel,” by The Crystals (in name only, he was in too much of a hurry to wait for them to make it out to L.A.) is one of the earliest examples of the focused excess he brought to every project.

With a list of number ones as long as your arm, and songs cited as masterpieces (“River Deep, Mountain High” by Ike and Tina Turner) and another that was the most played song of the twentieth century (“That Lovin Feeling” by The Righteous Brothers), it’s hard to overestimate his contribution to American culture. But enjoying that success just wasn’t in the cards. This may date back to his first tour with The Teddy Bears, where he was beaten up and urinated on by four hoodlums in a men’s room. From that time on he always had bodyguards and packed a gun. Add instant success at an early age, mounds of money and attention, and what already strange young genius wouldn’t go over the edge?

The problem is, as always, what do you do with the beauty created by someone who lived an ugly life? I have no answer and we won’t be getting one from Phil Spector; he wouldn’t have known the answer, anyway. My firewall will be firmly in place next time I listen to his stunning works, keeping thoughts of his sad and cruel life at bay. Rest in Peace, Phil Spector, you were America’s sad teenage Wagner.

Correction: The story originally stated that Spector produced The Shangri-Las, which is incorrect. The producer was Shadow Morton.

2 thoughts on “Sieger on Songs: Phil Spector Was a Killer”