And the results in swing states challenged by Trump are exactly in line with the national vote. 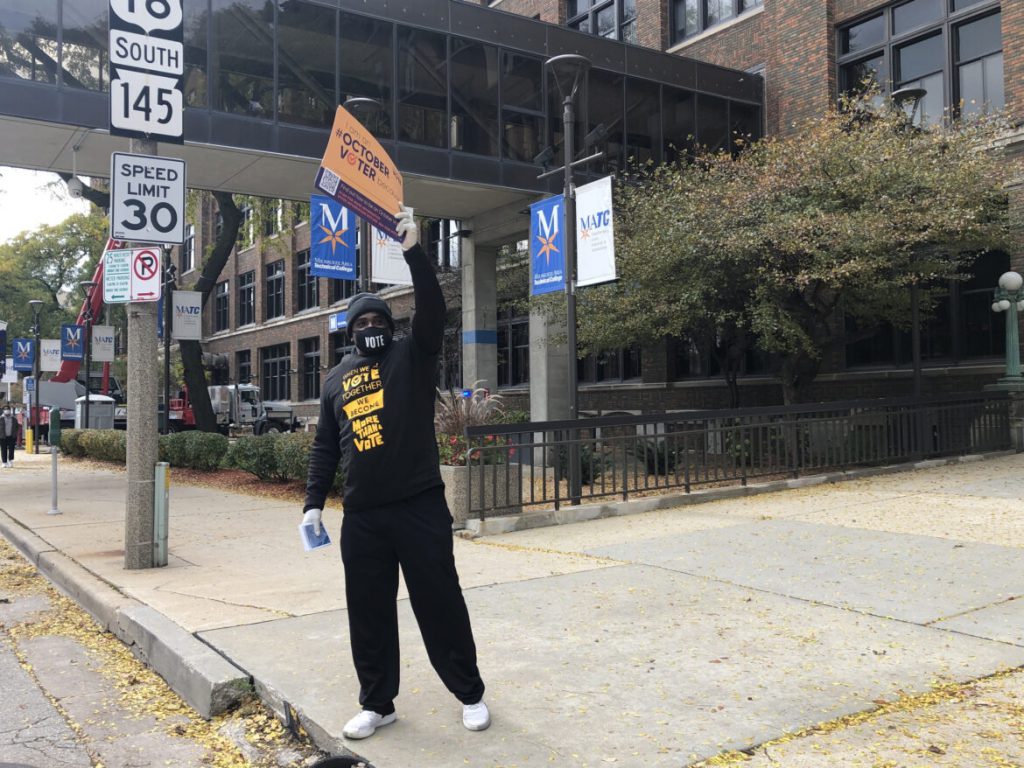 The two major party candidates—Joe Biden and Donald Trump—received some 27 million more votes in 2020 than did their 2016 counterparts—Hillary Clinton and Trump. But Biden’s share of the new votes was about 4 million more than Trump’s, as shown in the chart below. 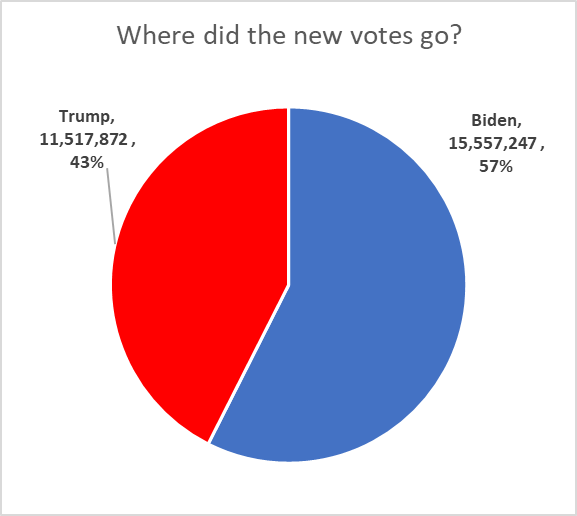 Where did the new votes go?

Where did the new votes come from? A major share of these votes was drawn from third parties (including write-ins and other candidates not affiliated with either of the two major parties), who saw a dramatic decline, from 18.5 million in 2016 to about 3 million in 2020, in votes they received.

As the next chart shows, this migration to the major party candidates accounts for 57% of the additional voters in 2020. The other 43% are people who did not vote in 2016 but did in 2020. 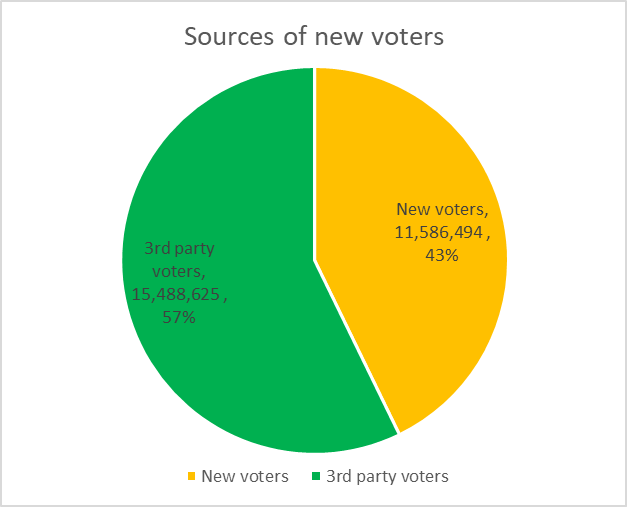 The next chart shows each party’s percentage increase in votes in 2020 compared to the total two-party vote in 2016. As the results for all states show, the vote for the Democratic candidate was up by 12.1% compared to 2016 whereas the vote for Trump’s was up by 9 percent. Added together, were 21.1% more votes for the two candidates in 2020. 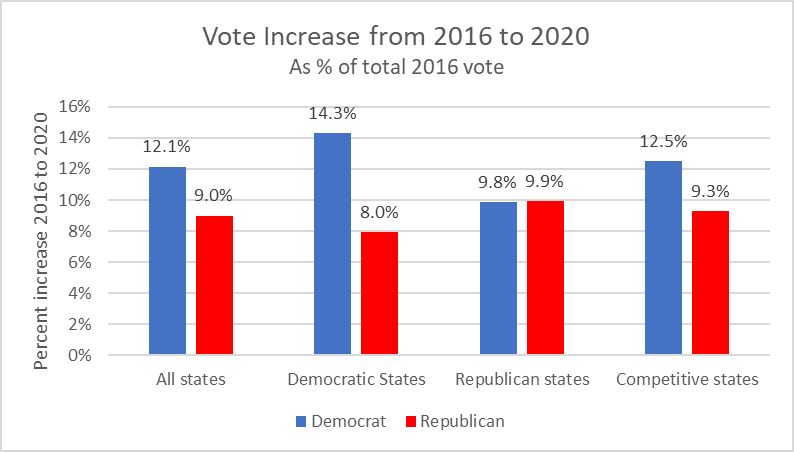 The chart also shows the voting increases for three groups of states: those that voted Democratic in 2016, those that voted Republican, and the six swing states —Arizona, Georgia, Michigan, Nevada, Pennsylvania, and Wisconsin. In 2016, Trump won five of the six competitive states (Clinton won Nevada). In 2020 Biden won all six.

Now consider the six competitive states. The proportion of new voters supporting the two candidates looks very much like the proportions for all states, or what one would get by averaging the voters in Democratic states with those in Republican states. In other words, the results are consistent with the conclusion that they reflect the will of the voters.

These results raise the question: in which states does Trump claim the election fraud took place? The group of states with the greatest surge in Democratic votes were the Democratic states, but Trump did not contest those results, because the margin was far too huge to overcome. Nor did he contest the results in the Republican states, since he won those.

The chart below shows the vote increase for Wisconsin and five of its counties—Milwaukee, Waukesha, Ozaukee, Washington, and Dane. Wisconsin’s vote growth is well below that of most other states, for both candidates. 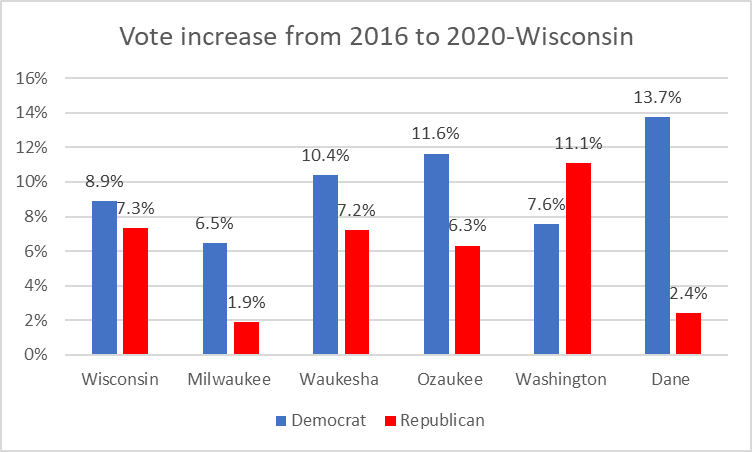 While there were more votes in Milwaukee County this year than four years earlier, growth was anemic, particularly on the Republican side. This conflicts with claims, by Congressman Tom Tiffany and other Trump minions, of fraud in Milwaukee. The Milwaukee problem is an undervote problem, not an overvote problem: too many Milwaukeeans did not vote.

By contrast, growth in the Democratic vote was particularly strong in the three suburban (WOW) counties. Someone looking for a suspicious trend might point to Washington County, where the percentage increase in Democratic voters was nearly six times higher than in Milwaukee County.

In reality there was no evidence of fraud in any county. As with the results for Dane County, there was a suburban shift to the Democrats that is consistent with national trends seen most dramatically in Georgia: a movement of urban and suburban voters towards the Democrats.

Trump, a deeply polarizing figure, drove more voters to the polls. Unfortunately for him, he was more successful in motivating his opponents than his supporters.

Unwilling to accept the message from the voters, Trump claimed fraud, reflecting a belief that he had an inherent right to continue in office indefinitely. By accepting his premise, any shortfall in his numbers would stem from fraud.

Trump continues to declare massive fraud but offered no evidence. It is unclear whether Trump believes his own lies or simply does not care whether a claim is true if it serves his purposes. His claim has the feel of psychological projection. Intent on stealing the election, he projects his own intentions onto his enemies.

Reflecting Trump’s failure to find evidence of fraud, his lawyers switched to criticizing choices in election management to support their demand that the courts, and later Congress, should toss out the votes in competitive states, and in the two most Democratic counties in Wisconsin.

Unfortunately, there are millions of Americans who have bought into his fantasy, including the people who rioted at the national Capitol and a much larger number of Republican primary voters who pose a threat to any Republican office holder who dares to criticize Trump.