Helped modernize, diversify university, was ninth member of her order to die of COVID-19. 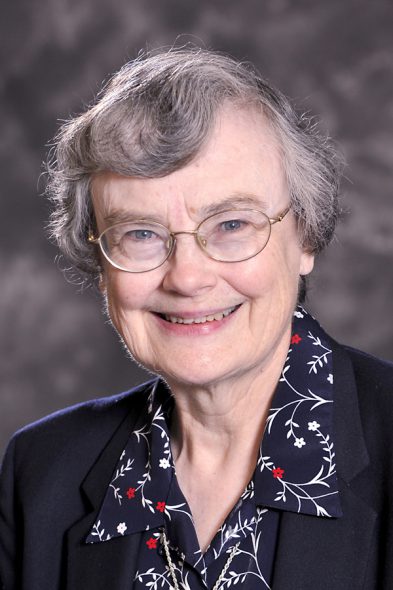 Sister Ellen Lorenz was  a teacher who rose to become the sixth president of Mount Mary University from 1979-1987. Yet she longed to return to her original vocation.

“After that visible role, Sister Ellen returned to the education department, spending another 25 years working with prospective teachers. Retiring from the education department in 2013, she became a part-time tutor in the Student Success Center until mid-2015,” according to the university’s announcement of her death at 85 on December 22nd, 2020 at the School Sisters of Notre Dame convent in Elm Grove. “Sister Ellen was COVID positive and had underlying health conditions,” said Kathleen A. Van Zeeland, the university’s director of marketing and communications. Sister Ellen was the ninth member of the order to die of COVID at the convent.

“Always Wanted to be a Sister”

Ellen Lorenz was born in Berlin, Wisconsin on July 6th, 1935 to Genevieve and Frank Lorenz, and began her education in a one-room schoolhouse. She made her First Profession July 17, 1957, in Milwaukee, styled as Sister Marie De Sales. (At the time, it was customary for nuns to take the name of Mary, followed by that of a saint.) In April 2020 she reflected on the occasion in a publication of the Foundation for Religious Retirement:

That was a day long awaited for as far back as I can remember. … I always wanted to be a sister.

How I got the idea is still a mystery to me for I did not attend Catholic school and did not know sisters until eighth grade. Our family lived on a farm and I walked to the one-room, all-grades schoolhouse for my early education. What I do know though is both my parents made God a very important member of our family. Selecting the School Sisters of Notre Dame was not a hard decision. My mom had been a teacher and taught our Sunday school classes, so teaching was a reasonable choice for me. After having excellent SSND teachers during my high school years and two years of college, I headed for the old Milwaukee motherhouse.”

She then earned a Bachelor’s Degree in English from Mount Mary (with a Latin minor), followed by a Masters Degree in Education from Loyola University in 1966, and ultimately an Ed.D. in curriculum and supervision from Northern Illinois University in 1969. She taught high school in Chicago from 1958 to 1964 before joining the faculty at Mount Mary in 1968.

“Sister Ellen was initially reluctant to become an administrator, and teaching continued to hold a strong place in her heart,” according to the university’s statement. Sister Ellen clearly preferred the classroom to the office, she said during her 60th anniversary Jubilee in 2017:

My first call was to teach English to high school students, which I found very fulfilling, and therefore, I was very reluctant to leave this mission when asked. The change meant that I would spend the larger part of my life working with college students in various capacities, primarily those of preparing these students to become high school teachers. I viewed this as a daunting task. But what I discovered as time went on, my greatest joys often came from seeing these students develop their values and skills and go on to inspire countless other young people through their teaching. Certainly among my greatest joys was seeing student teachers successfully working with their students.

However, her professional calling as an administrator was calling, and when assigned a duty by their superiors, sisters subordinate their personal feelings to the service of the greater good, and do no things in small measure when called upon to act.

This can be seen in the motto of the School Sisters of Notre Dame, founded in Bavaria in 1833: “Transforming the World through Education.”

In America, the School Sisters of Notre Dame were led first by Mother Caroline Friess (1824-1892), who arrived in Milwaukee in 1851 just as the pioneer city of “Yankees and Yorkers” was to see a surge of newcomers from abroad. According to a history of the order:

Immigrants, especially Catholic immigrants, were not always welcomed to this new land and poverty was often their lot. Church leaders struggled with the difficulty of ministering to an increasingly diverse membership in a rapidly growing church. At the same time, the United States was deeply divided over the issue of slavery.

In response to these needs in the New World, School Sisters of Notre Dame staffed hundreds of schools and cared for many children in orphanages and homes for children in the United States and later in Canada. Every child was welcome, but poor children — boys and girls — were especially welcome. A child’s country of origin, religious beliefs, or race made no difference.

Sister Ellen, named academic dean in 1976, initiated and developed a core course that all students still take, and which provides the basis for instruction throughout the university. It is called “Search for Meaning,” and has been the foundation of its curriculum for nearly a half-century at Mount Mary, which was founded in 1913.

During her 1979 to 1987 presidency, Sister Ellen was, like Mother Caroline before her, attuned to the need of making a higher education accessible to the broadest possible audience, regardless of background. Through her initiatives, Mount Mary is now ranked as one of the two most diverse schools in the Midwest. It is one of the two Wisconsin institutions of higher education to hold federal status as a Hispanic Serving Institution, opening access to Title V grants, and those from the National Science Foundation, the U S Department of Agriculture and the National Endowment for the Humanities. One-quarter of the students are of Hispanic background. She also created graduate programs open to men and women.

Today, the university serves 1,349 students, of whom 726 are undergraduate and 623 are graduate students.

Sister Joan Penzenstadler, the Mount Mary Vice President of Mission and Identity and a dear friend of Sister Ellen offered this reminiscence to Urban Milwaukee:

Well, the only thing that comes to mind is how S. Ellen would always deflect to the needs of the other.  She was always reflecting:  So-and-so is going through a really hard time, so I could not ask her to do more at this time.  Or: I felt terrible about having her get up to unlock the door at such a late hour. This was Ellen’s other-centeredness, over and over again.

Virtual Memorial to be held Thursday

The School Sisters of Notre Dame will hold a virtual memorial liturgy on Thursday, Jan. 14, 2021, and a tribute reflection will be shared with the Mount Mary campus community during the All-University Workshop on Tuesday, January 19. The Central Pacific Province of the School Sisters of Notre Dame posted this message: “We’re living in unprecedented times and due to the COVID-19 restrictions it has yet to be determined when a recording of the prayer service and/or memorial Mass will be available.”