A garland was made with a ring for every person that has died in Wisconsin. 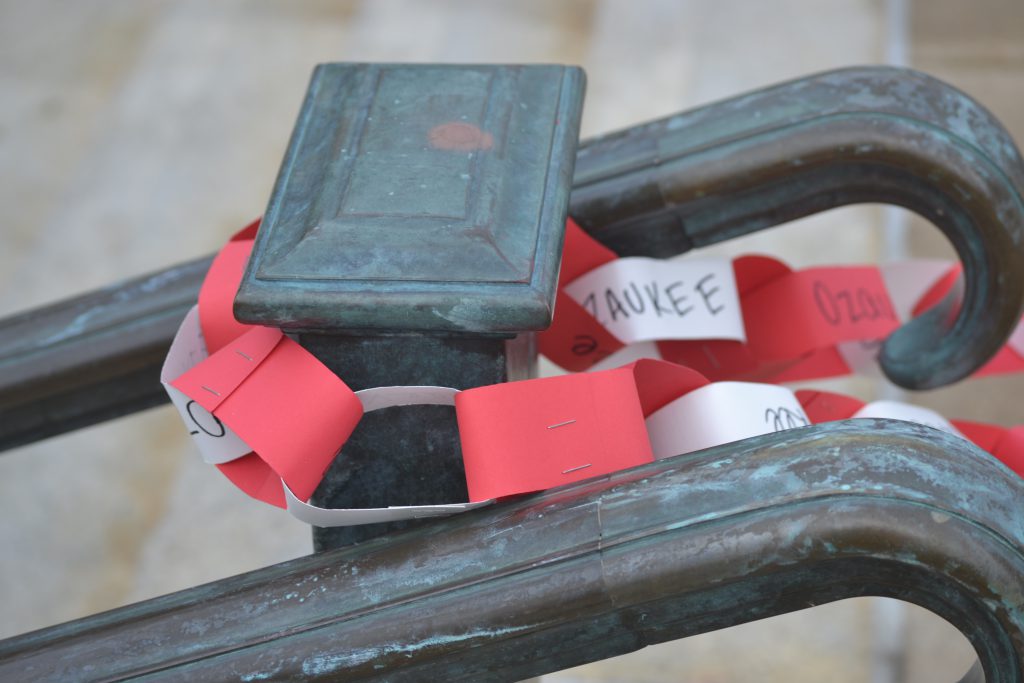 Every ring in the chain represents someone who has died from COVID-19 in Wisconsin. The rings are inscribed with the names of the counties where people have died. Photo by Erik Gunn/Wisconsin Examiner.

For about an hour on Wednesday, a construction paper chain made up of nearly 5,000 interlaced rings — red, green, yellow, white and blue — bedecked the steps outside the state Capitol building.

Each ring bore the name of one of Wisconsin’s 72 counties. Each county had one ring for every one of its residents who died from COVID-19 since the start of the pandemic. 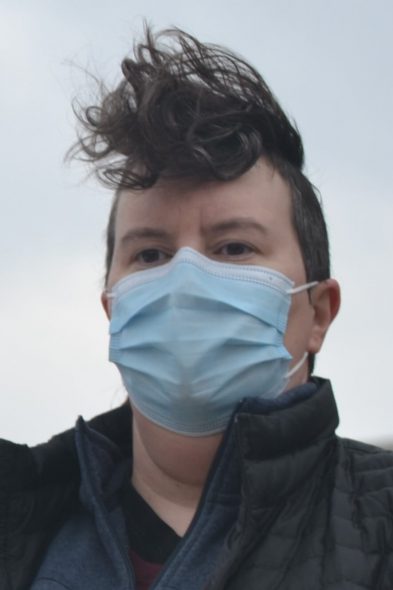 Kate Walton, an emergency room nurse, organized Wednesday’s display of a commemorative paper chain marking those in Wisconsin who have died from COVID-19 during the pandemic. Photo by Erik Gunn/Wisconsin Examiner.

It was the sort of chain that schoolchildren might make to decorate a Christmas tree. Indeed, it was a Christmas tree, or rather two of them, that inspired Kate Walton to organize the project.

Walton is an emergency room nurse who has watched in growing frustration for months as the state Legislature didn’t meet and didn’t meet, and its Republican leaders publicly attacked Gov. Tony Evers for statewide health orders that were issued to try to rein in the spread of the coronavirus.

Then, after Evers said that this year the state would not erect an official Holiday Tree in the Capitol rotunda because the building has been closed to the public in the pandemic, Republican state Reps. Shae Sortwell (R- Two Rivers) and Paul Tittl (R- Manitowoc) defied the state Department of Administration and put up their own tree on Dec. 1. After it was removed, they put up a second tree Dec. 15.

“Honestly, I got mad about the whole Christmas tree debacle,” Walton says. “The GOP wanting to put a Christmas tree up and throwing a temper tantrum about it when people are dying. You know, it’s just it’s ghastly that that’s their biggest concern — whether or not they get to sing Christmas carols and put up their tree, when there’s families that won’t be able to spend their holidays together.”

And it was more than just deaths from COVID-19.

“Not only the people that have died, but people that are hospitalized right now,” Walton says. “People who are quarantining. The people who can’t travel because of the pandemic. The people in health care: I’ll be in the hospital tomorrow and Friday, taking care of people. We have so many bigger things to worry about than whether or not we can put up a tree.”

The project came together over social media. Some wondered about getting the names of every person who had died of COVID-19, but concern for privacy and the lack of public records led them to simply name the counties. They used the county-specific numbers that the state Department of Health Services (DHS) posts every day in counting up how many rings to make. About 10 people took part, says Walton; one volunteer made 1,000 rings herself.

“We had more volunteers than we ended up needing, because this just speaks so powerfully to people, resonates so deeply with people,” Walton adds. “So many people, I think, are so frustrated by the lack of action that people are happy to be able to do something tangible.” 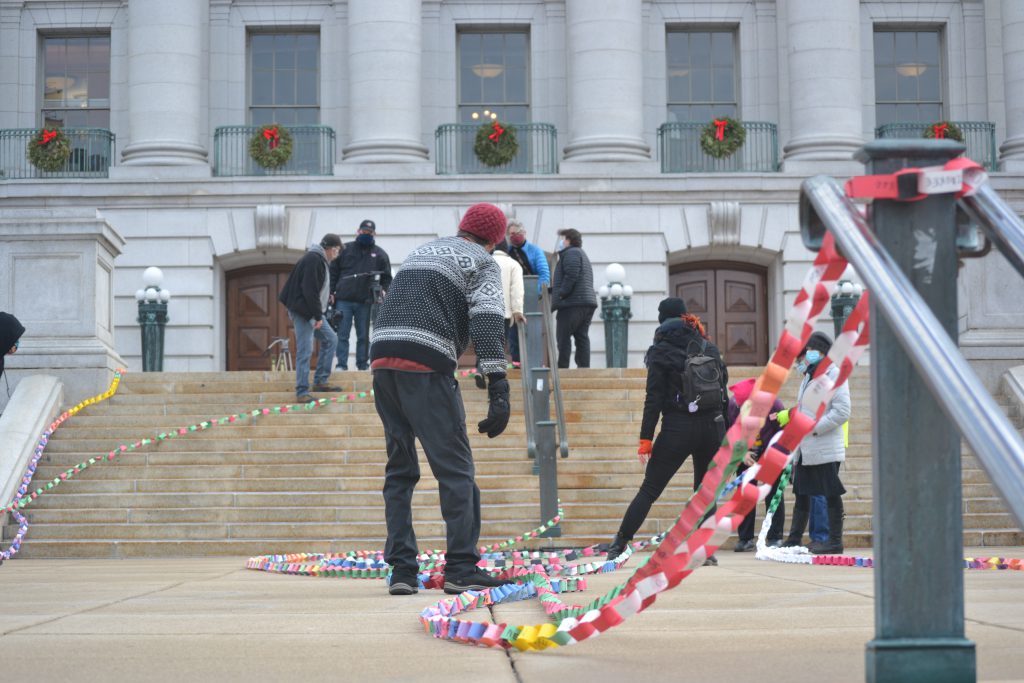 Volunteers array strands of an 833-foot paper chain on the steps of the state Capitol Wednesday, commemorating Wisconsin residents who died from COVID-19. Photo by Erik Gunn/Wisconsin Examiner.

The data chain is frozen in time as of Monday’s DHS report, when there had been a total of 4,425 deaths from COVID-19 reported in the state. “We couldn’t keep up, which is also a sad reality of this pandemic,” Walton says. 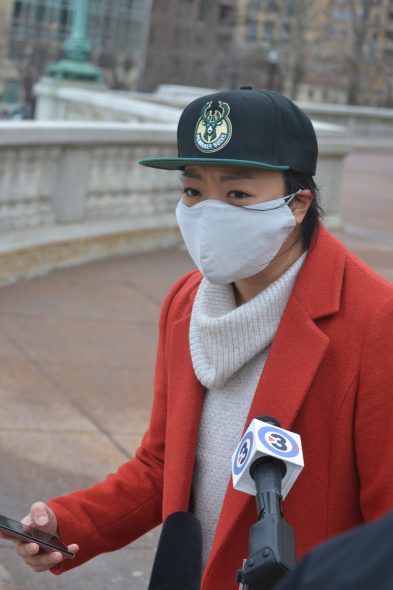 Outside the state Capitol building on Wednesday, incoming state Rep. Francesca Hong addresses the volunteers who made the commemorative chain. Photo by Erik Gunn/Wisconsin Examiner.

In a notice composed to announce Wednesday’s paper-chain-protest, Walton wrote: “GOP state legislators have put up more Christmas trees (two) than they’ve passed COVID relief bills (zero) since April. Meanwhile, the pandemic is raging out of control in Wisconsin. Their inaction and obstruction have contributed to the spread of COVID and to the consequential suffering of Wisconsinites impacted in so many ways by the pandemic.”

Volunteers arrayed the chain — roughly 833 feet long — on the corner of the Capitol facing State Street. The paper loops meandered up the steps, down again and back up, occasionally draping over fixtures on the staircase.

The organizers presented the chain to incoming state Rep. Francesca Hong (D-Madison), who will take office in January.

“As I stand in front of you today, we’ve reached 4,882 reported deaths from COVID-19 in the state of Wisconsin,” Hong told the group scattered over the steps. “Over 250 days since lawmakers in the Capitol have passed a bill. Zero COVID relief bills since April. That’s the harm of this pandemic.”

Hong criticized Republicans in the Legislature, for whom she said “our government only works to serve the rich,” and Assembly Speaker Robin Vos (R-Rochester) for “obstructionism and callousness” in the pandemic and for acting “as a roadblock for the governor and for our state’s COVID response.”

“We have the best tool in fighting injustices: in remembering our shared humanity,” Hong said. “We cannot accept the status quo. We cannot accept that for many in our state, inadequate health care, financial insecurity, racial inequality, and many more structural inequities have literally cost them their lives.”

The organizers had considered making the chain a “gift” to Vos, or asking Hong to do so. Might they have hung it on the GOP’s contraband tree in the building — if it is even still there?

“It’s really tempting,” Walton allows. “In the short term, that would be great, because it would literally bury the tree.”

Instead, though the chain went to Hong for safekeeping, and perhaps a longer life.

“It’s a very, such a powerful statement that preserving it to travel and continue to show people — just the tangible reminder of what we’ve lost — I think makes more sense,” Walton continues.

“I just keep coming back to it doesn’t have to be this way. You know, there are things that we could have done that could have kept so many of these people alive, and we didn’t do it. You know, we did it for a month. But then our legislators literally threw their hands up and said, ‘Well, there’s nothing we can do.’ And that’s just not true.” 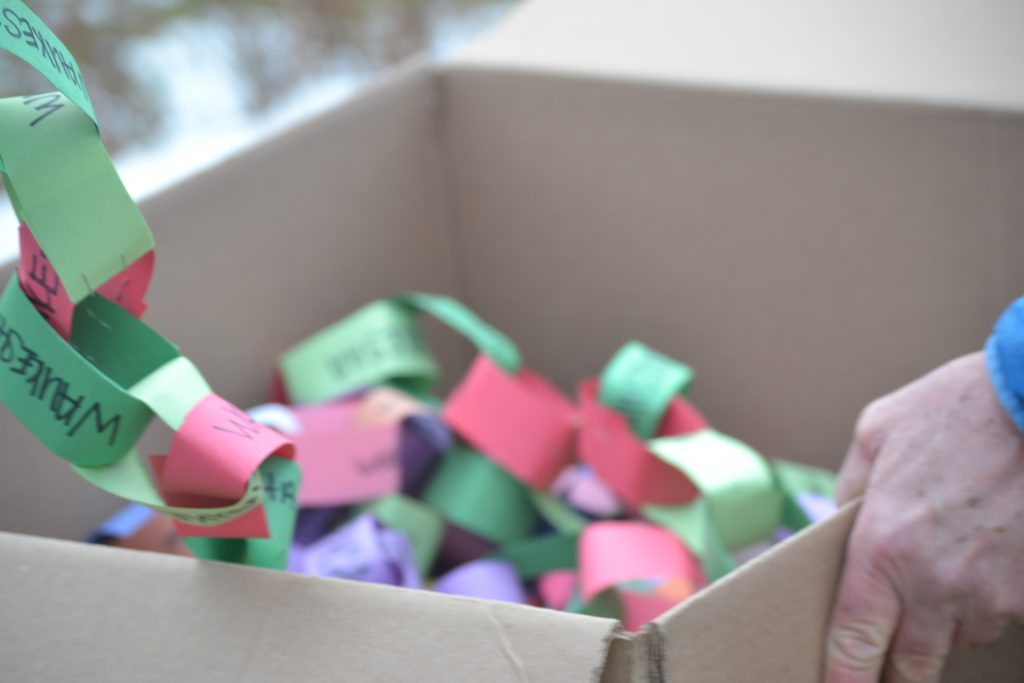 Volunteers gather up the chain after displaying it. Photo by Erik Gunn/Wisconsin Examiner.

Of course, Walton says, the chain by itself isn’t enough.

“It’s important that we don’t just memorialize the dead, but that we try to get justice for those people that are still living, on their behalf,” Walton says. “It’s our job as the survivors to make sure these people aren’t forgotten and to make sure that we’re not continuing to add to these names, as much as that’s possible.

“And there’s a lot we can be doing to make that more possible.”