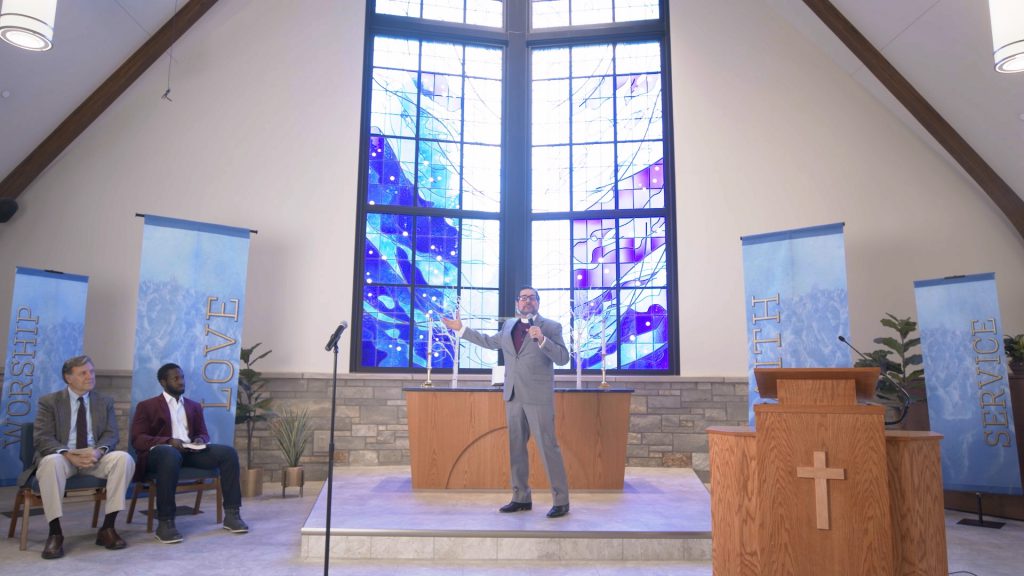 The Christians. Photo courtesy of Next Act Theatre.

In clever ways, Next Act Theatre reminds us how important the live theatrical experience is as it introduces the online premiere forced upon it by the pandemic.

Lucas Hnath’s The Christians (which won an Obie in 2016) opens in this substitute virtual production with a camera gliding through Next Act’s attractive home at 255 S. Water St., through the lobby and seemingly into the theater where waits (again seemingly) a gigantic megachurch set with stained glass windows, a gospel choir and quality microphones to preach to the unseen thousands attending the service.

The set is manufactured for online illusion, of course, and the unseen congregation is us.

The invisible gospel trio (fabulous local singers under music director David Bonofiglio) swells beautifully as Pastor Paul finalizes retirement of the church’s giant debt and sticks a humanistic knife into the mega-growth he has led over a decade. He gives a sermon discarding hell, or at least the way today’s revivalist churches think of hell and Satan as all consuming. He demands Christianity without automatic hell for non-Christians.

Hnath, a bold playwright with an ear for conversational counterpoint and social justice issues, is not taking on a new topic, since the view of hell in Christian teachings has attracted writers as diverse as James Joyce and Dostoevsky (“Fathers and teachers, I ponder, ‘What is hell?’”).

But Hnath may have a different target – the minds of megachurch mavens and why they cling to Satan. One by one the congregation peels away from Pastor Paul – whose flamboyant aura that must have built so mighty a church has now settled into honest sincerity, a matter-of-fact performance by Next Act artistic director David Cecsarini, who may know too well how his acting choices control the play’s emotional flow.

There is never a sense of a Zoom concoction in the production. This is more like an actual theater event being spied on, until you look closer at the fringes, the lighting and the shifts of camera. Characters seem to sit close to talk but there is a conscious effort to appear natural.

Director Edward Morgan has chosen select close-ups and adroit editing to flash in on dramatic moments while retaining the continuity we expect in theater pieces. The technique also allows meaningful reaction moments among the cast’s listeners. Yes, these are dramatic substitutes for the group energy we would feel if we and other patrons were actually there.

The folks slowly abandoning Pastor Paul include his charismatic but unbending associate pastor, (a fine measured performance by Andrew Muwonge), his board’s elder (Rick Richter, a smooth and sonorous voice of reason), a sweet and then strident congregant (Emily Vitrano in a great demonstration of how a normal conversation can turn nasty) and even his wife, played with great naturalistic skill, sharp tongue and sensitive probing by Marti Gobel.

Hnath and Morgan both balance the intellectual issues with multiple human touches. The best directorial device is using the church pulpit and the more intimate pastor’s office to split up some of the characters’ sermonizing, exposing the interior debate and sometimes the interior hypocrisy.

But while this film cutting technique adds some things, others are lost – including those little chuckles of audience laughter that should be there within many of the lines. The actors are smart enough not to artificially pause as they sometimes can do in live theater. The performances are quite polished, but I suspect Cecsarini in particular might miss the do-overs possible in a live theater run when you can fine tune a moment based on an audience reaction.

Here there is no audience reaction, no more than there is during a Netflix movie, nor is there an underlying musical oomph to tell you how to feel. But the Next Act company has guessed darned well about where our attention should be focused. Suddenly a local theater production is worth as much time as that streaming service you’ve forgotten you’re paying for.

There were some delays in the Nov. 23 launch, but all is fine now. There are detailed simple online instructions for ROKU and other user methods, including a video, if your setup is not as desktop PC simple as mine.

The play – available until Dec. 13 through www.nextact.org/the-christians — is full of bright conversations within a predictable pattern of human frailty and the ending doesn’t have an uplifting punch, more a sense of sadness. But the journey is thoroughly professional and thought-provoking. If we have to go online, Next Act has set the bar high with this smart production. 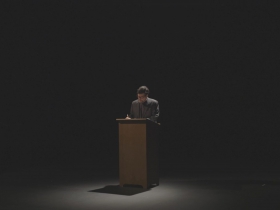 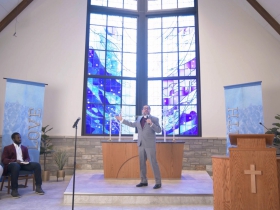 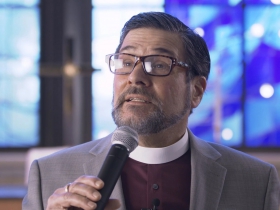 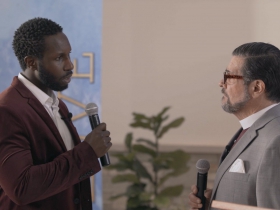 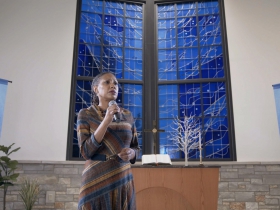