Destitute people, need for food have exploded during pandemic. 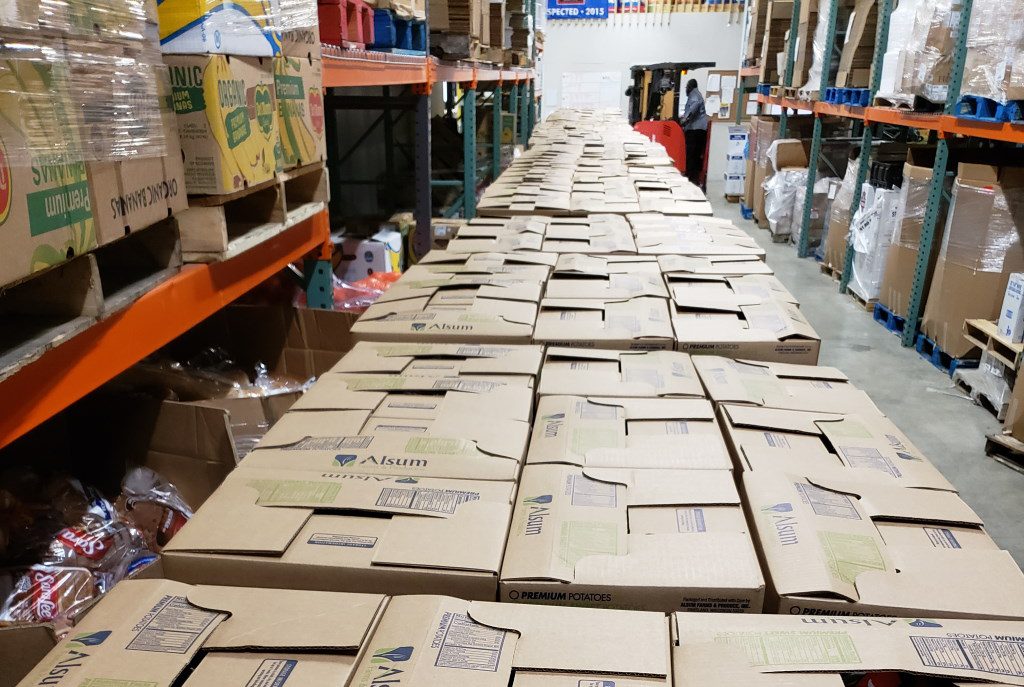 Pre-packed boxes of food wait to be given to families in need. Photo from Second Harvest/Wisconsin Examiner.

As the holiday season begins, Wisconsin’s food banks and pantries are working on sending turkeys and stuffing to families across the state, but Thanksgiving is just one out of 365 days in which these organizations work to put food on tables.

This year that job has been even harder as they’ve had to completely rethink operations and deal with a number of obstacles created by the COVID-19 pandemic, even as the resulting economic fallout has increased families’ need for help.

This year Second Harvest Food Bank, which serves hundreds of agencies across 16 counties, has seen demand go up 50-60%, according to spokesperson Kris Tazelaar. Interchange Food Pantry in Milwaukee has gone from serving 1,300 people per month to serving 4,500 per month, according to Executive Director George Neureuther.

Caritas in Beloit hasn’t seen increases that high but says demand has been steadily increasing every month since families used up their stimulus money, according to Executive Director Max Dodson. Antigo Food Pantry in Langlade County hasn’t seen numbers increase but has had families return after not needing services for a year as well as new families needing help, according to manager Emma Nicholson.

“The biggest challenge is the increase in the number of people struggling with food insecurity,” Tazelaar says. “By and large these are folks who have never struggled with hunger before, never needed to figure out the emergency food system.”

In Milwaukee families are struggling with the same thing and it’s causing the food pantries to help more than usual, especially for the people whose jobs are affected by pandemic measures.

“The need is just greater,” Neureuther says. “For the first time we’re having people who have never visited our pantry but have lost their jobs. We were once a month and now we’ve opened to be twice a month because the need is so great. It’s not going to disappear. The people coming to our pantry are going to be the last ones getting their jobs back. They worked at hotels and restaurants.”

There have been challenges in other aspects of the organization’s day-to-day operations.

At Interchange, Neureuther says it’s been tough getting volunteers during the pandemic. He added that donations of food have slowed down — though people have been instead donating money, which helps the pantry buy fresh produce.

“There are less food drives but people are willing to help donate financial support these days,” he says. “We have to buy most of our vegetables from a wholesale produce company. We feel it’s necessary to provide our guests food that will help them maintain their health.”

Second Harvest, which deals with bulk amounts of food, has had to manage issues with its supply as food manufacturers have adjusted their production, Tazelaar says. So even if food drives aren’t happening at the normal level of past holiday seasons, the bigger dent comes from the larger suppliers.

“Those donations from individuals are a small percentage of overall food donations,” he says. “The bigger donations for Second Harvest, we deal with truckloads of food. A lot of that food is simply not available from some of the manufacturers. They’re tightening their belts, limiting their production runs. When they don’t have the overage they don’t have extra products to donate to us.”

Food pantries across the state have had to adjust to the pandemic, changing in-person operations from a grocery story-like experience to a drive-through service in which boxes of food are pre-packed and placed into people’s trunks. Some say that makes it harder to connect with the families. But the organizations have also been resilient in the face of lots of obstacles, according to Dodson at Caritas.

“Everybody has gotten into that routine,” Dodson says. “I don’t know anymore what the barriers are because to us they’ve become nothing more than speed bumps. We’re going to get over it, under it or through it but we’re going to accomplish our mission. I’m so pleased with how everything is working here.”

All of the food pantries are working on providing families with holiday meals and adjusting in whatever ways they have to in order to accomplish that. But the goal isn’t just to provide a Thanksgiving dinner, it’s to provide dinner every night.

“Honestly, the holidays are when those family meals are, there’s heightened awareness of them, from our perspective that’s 365 days a year,” Tazelaar says. “Those meals to families happen every day. We look at the long term, the long haul. Certainly we recognize the importance of holiday meals but our focus is on providing more food in six months, 12 months, 18 months rather than that one particular holiday.”