Designed to look like a news site, it published insinuations of voter fraud that were spread on social media. 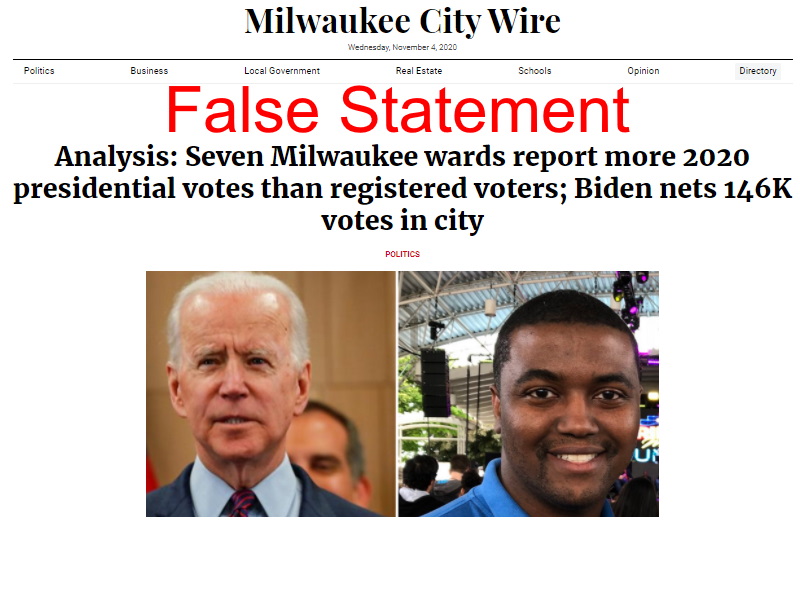 A politically charged website posing as a local news outlet published a slew of misleading claims about Milwaukee’s voter turnout for the U.S. 2020 election on November 3rd. These claims were reposted by the host of a popular conservative radio show and spread across Milwaukeeans’ social media feeds.

The website later updated its numbers (the site states five wards instead of seven) but the story still bounced across other purported news sites and ended up in readers’ Facebook, Snapchat and Twitter feeds. Hannity’s tweet currently has over 21,000 likes and over 8,000 retweets.

Even former-governor Scott Walker got in on it. He tweeted a link to the bogus-news site and speculated about the same day voter registrations.

City Wire, and other metric media sites, come from businessman Brian Timpone, the New York Times reported. whose methods in his own discredited media site earned the nickname “pink slime journalism.” Thousands of algorithmically generated articles, often with the same handful of stock images, populate the website and appear to be randomly generated data dumps about donations and market changes. Wisconsin has been targeted for a number of these faux-local news sites. Examples include The Sconi and Green Bay Reporter.

Articles that aren’t randomly generated are pulled from political campaign statements or are fabricated to echo accusations and support agendas. Usually these articles have no named writers.

The City Wire states that wards 274, 273, 272, 277, 269, 234, and 312 all reported over 100% turnout for registered voters. This is untrue. According to data from the Milwaukee County Clerk website, none of these wards reported a voter turnout greater than those registered on November 3.

One ward did have a turnout of over 100%. Ward 326 had four registered voters that cast ballots on November 3. A fifth person registered and voted that same day. The ward went for Donald Trump with a single vote.

In a press conference last week, Wisconsin Elections Commission director Meagan Wolfe explained, “Because Wisconsin voters can register on Election Day,” she said, “The numbers of votes could be more than registrations on file.”

“I really wish people would check the facts, share things like our press release,” said Wolfe. “I know it’s not as flashy as maybe other things you could share on social media but share the facts rather than speculation and rumors.”

Wolfe said that no irregularities were reported after ballots were counted. Likewise, the Elections Commission tweeted out that there are never more ballots than registered voters.

Metric Media LLC owns hundreds of news websites in states across the country with the same layout and randomly generated articles. The New York Times has compiled a list of sites the network owns, including 24 in Wisconsin.