Ron Johnson, Robin Vos and Mark Belling get aboard the Trump crazy train. 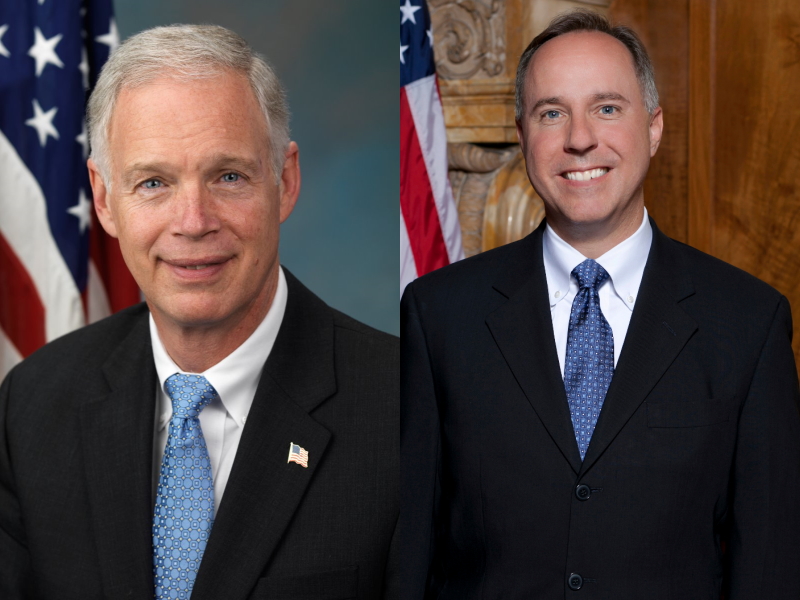 President Donald Trump has made repeated claims the presidential election was stolen by Democrat Joe Biden without providing evidence. His statements have become so unhinged that the media has begun to ignore them. That includes election reporters at Fox News.

But there are still some Republicans willing to go down the rabbit hole with Trump, and that includes U.S. Senator Ron Johnson, Assembly Speaker Robin Vos and ever-angry conservative talk radio host Mark Belling. Their claims are silly, but help to undermine American democracy — and tell us a lot about the current state of the Republican Party.

Trump has demanded a recount of the Wisconsin vote, which Biden won by 20,500 votes. Under state law a recount is automatically conducted at state expense when the margin of victory is less than 0.25 percent. However, if the margin is above this but less than 1%, there can only be a recount if a candidate requests it and pays for it. In Trump’s case the margin is about 0.6% so he will have to pay the costs, which were estimated to be about $3.5 million for Green Party candidate Jill Stein, who requested and paid for a recount after the 2016 election.

It’s far from clear Trump believes he has any chance of changing the outcome. Rather, it’s a way to rally the faithful and retire campaign debts, which may be substantial. His campaign’s pitch for donations to the recount effort states that at least 50% of any donation may go toward retirement of campaign debt.

Former governor and Trump loyalist Scott Walker predicted this was unlikely to change the result:  “After recount in 2011 race for WI Supreme Court, there was a swing of 300 votes,” he tweeted. “After recount in 2016 Presidential race in WI, @realDonaldTrump numbers went up by 131. As I said, 20,000 is a high hurdle.”

The reason for that is that Wisconsin runs very clean and efficient elections. Take it from Vos, whose statement on the election said this: “Wisconsin’s election system is one of the best in the country. We have well-trained staff that finished counting the ballots well before most other states.”

Yet that hasn’t stopped Johnson from echoing the Trump campaign’s unproven claim of “irregularities” in the state’s election. Johnson told WTMJ-AM there “always been some voter fraud that the mainstream media and unfortunately, many officials just simply ignore.” Republicans in this state have repeatedly failed to provide evidence of voter fraud in court cases, but continue to make these claims. Johnson offered no proof of his claim and his spokesman did not respond to the Associated Press when asked to provide some. “I’m not alleging anything because I have no proof,” Johnson said. “All I’m saying is there are enough irregularities” to raise concerns.

Vos, too, was all about those darn ‘irregularities.”

“There must be absolute certainty that the impending recount finds any and all irregularities,” he declared.

But Vos wants more than just a recount. He has directed the Assembly Committee on Campaigns and Elections to conduct an investigation using subpoena powers to call witnesses to get to the bottom of… what exactly? Well, there “concerns surfacing about mail-In ballot dumps and voter fraud,” he noted, without offering one example.

Neither Vos nor Johnson responded to Urban Milwaukee’s request for any evidence of these alleged irregularities.

While there were many differences between the 2016 and 2020 results in Wisconsin, the two most important appear to be the even higher turnout in Madison in 2010 and a significant reduction in Trump’s margin of victory in the WOW counties of Waukesha, Ozaukee and Washington. The city of Milwaukee had about the same turnout as in 2016.

Yet Vos tried to claim Milwaukee was somehow key to the election’s results. “I hope the committee investigates the inefficiency of Milwaukee’s central counting of absentee ballots,” his statement declared.

Why did he go after Milwaukee, where there was nothing that noteworthy about the turnout, rather than Madison? Because Milwaukee is a majority-minority city that Republicans like Vos and Walker have long vilified, trying to stoke the anti-Milwaukee feelings of outstate voters. Both would be the first to deny any racism in such statements, but consider the contradiction in what Vos had to say. On the one hand he brags that Wisconsin finished its count well before most states. On the other hand, this is due to one factor: Milwaukee got the job done more efficiently that other big cities. like Atlanta, Philadelphia and Las Vegas, where the count dragged on and on. So how can Milwaukee be both a model of national efficiency and so inefficient it must be investigated?.

For more of this kind of thinking, consider the “open letter to Wisconsin conservatives” by Belling. It is long on anger and filled with complaints about Republican leadership in this state, despite a turnout by Republican voters that was at an historic high.

Belling charges that the Election Commission lost the election by invalidating the nomination papers of the Green Party and Kanye West. Never mind that both were in violation of state law. Never mind that legal challenges of the decisions were not successful in court. Belling charges, without evidence, that the Elections Commission staff are Democrats who wanted to hand the election to Biden.

As for the idea that having West and the Green Party on the ballot would have won Wisconsin for Trump, Urban Milwaukee data cruncher Jeramey Jannene examined that scenario and found Biden would have still won, though by less. That’s because third parties don’t do well in high turnout elections like this year’s race, as Urban Milwaukee writer Graham Kilmer previously reported.

Belling goes on to complain about conservative Supreme Court Justice Brian Hagedorn, who ruled with the three liberals on the court that the Green Party had not followed the law in filing its nomination papers. Oh, the irony. Hagedorn ran as a strict constructionist who promised to interpret the law as written. Which is what he did. And Belling was a fierce supporter of Hagedorn, while excoriating GOP operative R. J. Johnson for distancing the realtors association from Hagedorn. Yet Belling is now blaming the “Madison Mob” of folks like Johnson for not properly vetting Hagedorn.

You could make a strong case that no one is more responsible for Trump’s defeat than Belling. Because the key to Biden’s win was the fall-off in support for Trump from conservatives in the WOW counties, those same people that Belling targets as listeners. Belling did his best to sell four more years of a man many suburban voters had come to hate and failed. To his failure you can add the repeated tone deaf statements of Vos and Johnson’s about the pandemic, which most voters did not agree with. Together these three helped Democrats make inroads among Republicans that helped elect Biden.