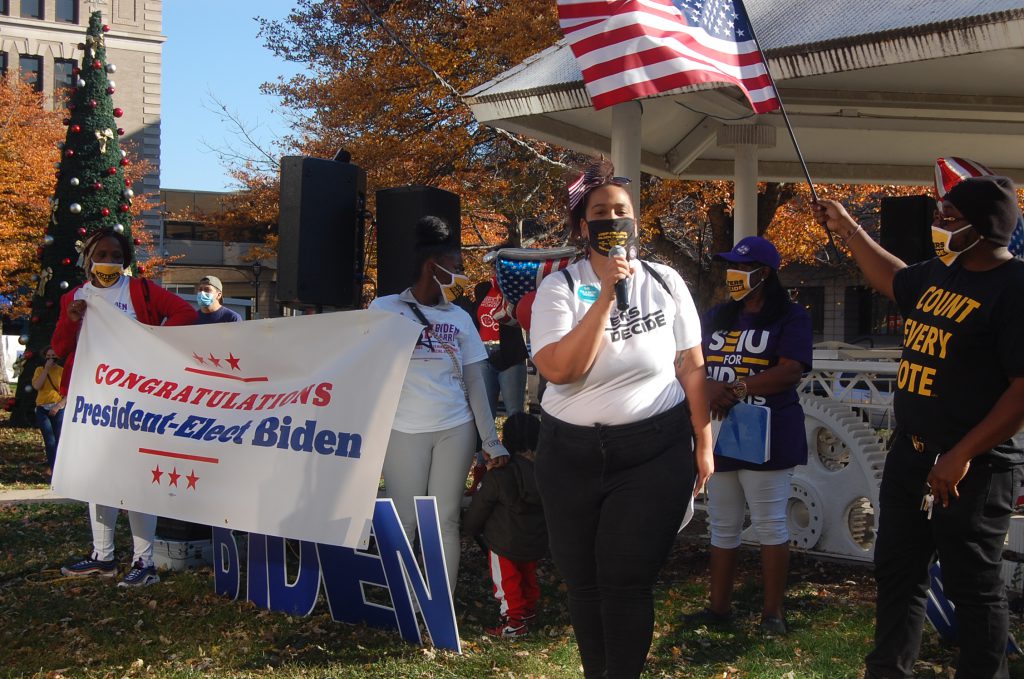 Hundreds of people gathered in Zeidler Union Square (301 W. Michigan St.) yesterday to celebrate after president elect Joe Biden and running mate Kamala Harris defeated Donald Trump in the 2020 U.S. election. Organized by SEIU Healthcare Wisconsin, Fight for $15 Wisconsin and Milwaukee Area Service and Hospitality Workers Organization, the rally celebrated the concerted effort to get Milwaukeeans of color to vote early or go to the November 3 polls during the election season. These voters ultimately played a role in deciding the next presidency.

Voters with signs, balloons, pom-poms and t-shirts danced to music blasting over speakers set up around the Wisconsin Workers Memorial gazebo and listened to speakers from activist groups and political parties. Attendees with signs that read “Voters decide,” recognized those who turned in their absentee ballots and stood in poll lines while facing the COVID-19 pandemic, voter ID laws and economic challenges.

Angela Lang, the executive director of Black Leaders Organizing Communities, said BLOC made over 235,000 phone calls and sent over 557,000 text messages to city voters while standing in front of the gazebo. The crowd filling the park interrupted her speech at times with cheers.

“With all of these circumstances, the insurmountable barriers, I am damn proud of my city,” said Lang. “The fact that we had all of these challenges and yet we still showed up. Imagine if that work didn’t happen. Imagine if the groups and organizations didn’t make that happen.”

Rev. Greg Lewis, a Milwaukee pastor and executive director for Souls to the Polls, said that the “depressed vote” among the city’s Black community during the 2016 election didn’t apply anymore. “I got more than I expected from our friends and neighbors when you came out and voted and you weren’t afraid. Now we’ve made a difference, not only in the state and the nation, but we made a difference in the world.”

“Our vote was the worst time to go out and vote, and it was the most important vote in the world,” Lewis told the excited crowd. “And we took care of business.”

The struggle to gain more political clout is not over for Lewis or his followers. During his speech, he said that people needed to build a bloc of voters and cooperate with one another. “We have to stay together,” he said, mentioning the 100,000 Milwaukee souls brought to polling stations through Souls to the Polls. “We’ve got to keep as many of those people together so we can control our local politics. So we can tell folks what we need, when we need it, and they can’t say no. We have to have control.”

“The work is not done,” said Marcelia Nicholson, Chairwoman of the Milwaukee County Board of Supervisors, while speaking in the park. “Let’s use the lessons of the movement leaders that came before us that liberation and collective freedom does not end at the ballot box.”

Jack and Debra Klepp, a couple from Milwaukee, said they were ecstatic to hear that Biden had won the presidential election. Debra said that political division would have be mended one person at a time.

“My mantra is spread love. Even when people are hateful, we have to help them understand how they’re hateful,” Debra Klepp said.

“What I’m enthused about is all the young people who are involved in this election,” said Jack Klepp. “The future is great with these kids.”

The rally concluded with a caravan that drove through Vel R. Phillips Ave. and across the 16th St. Viaduct. The route passed different places in Milwaukee’s civil rights history and flew Black Lives Matter flags, Biden and Harris campaign signs and yellow ribbons. 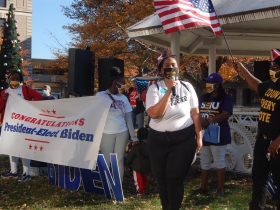 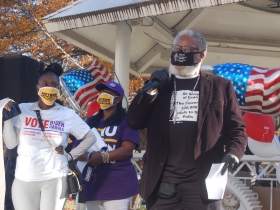 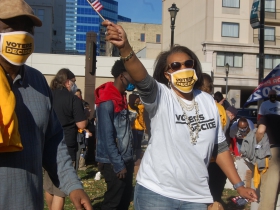