By Melanie Conklin, Wisconsin Examiner - Nov 3rd, 2020 12:05 pm
Get a daily rundown of the top stories on Urban Milwaukee

Negative attack ads used by both political parties at election time have long featured factual distortions.. But at least two Democratic Assembly candidates this season are facing doctored ads that show photos of them holding up pieces of paper that have been doctored to show something completely different than the real photograph.

In the case of Democrat Joel Jacobsen, who is running against Republican Assembly Speaker Robin Vos in Racine County — a photo of Jacobsen proudly displaying his completed nomination papers in a folder was put into a flyer replacing the nomination papers in the real photograph with papers reading “DEFUND THE POLICE” in large, block letters.

The mailer with the fake photo states that it was paid for by the Republican Party of Wisconsin as an in-kind donation to Vos’ campaign.

“My campaign manager saw it and she said, ‘I know where that photo came from because I took it when we turned in nomination signatures,’” says Jacobsen. “I have not said defund the police. I purposely avoided that language because it just gets confusing and misleads people. I say we need police reform, particularly relative to Jacob Blake.” (Blake was shot in the back by Kenosha police in August.) 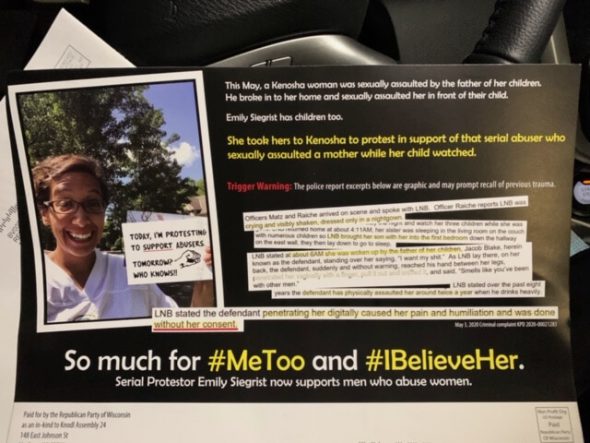 Another doctored photo replacing a sign with fake text in a mailer was used against nurse and veteran Emily Siegrist who is running in against Rep. Dan Knodl in the suburbs north of Milwaukee, which are a major focus for both parties this election. The mailer referenced her attending a Black Lives Matter protest in Kenosha after the police shooting of Blake, but it accused her of taking her young children to a protest in support of a “serial abuser who sexually assaulted a mother while her children watched,” according to a report in the Milwaukee Journal Sentinel. The flyer makes no reference to Blake or the Black Lives Matter movement and she is holding a doctored sign reading: “Today I am protesting to support abusers. Tomorrow? Who knows!”

The Republican Party of Wisconsin did not respond to queries about the doctored photos, but in response to the Siegrist ad, state Republican Party’s executive director, Mark Jefferson responded to the Journal Sentinel with a statement: “We strongly support racial equality and, unlike the left, believe it can exist without ignoring rape victims. Nor is it about the officer’s conduct, which is under thorough review. It’s about Democrat hypocrites, and many in the media, who last year embraced #MeToo only to ignore assault victims now.”