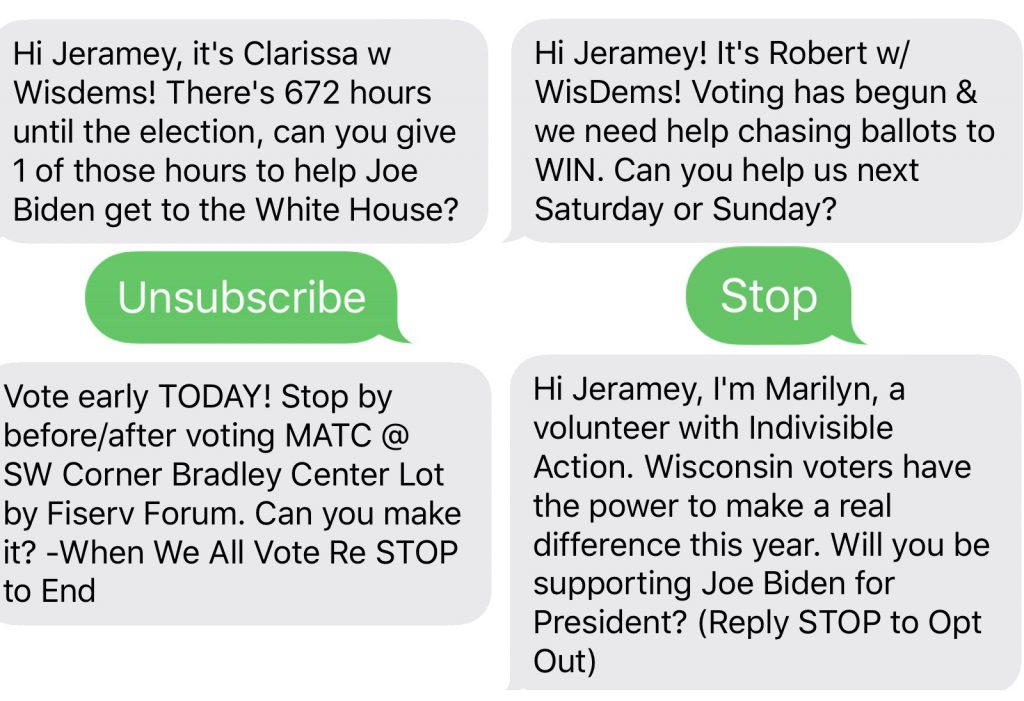 “Hi, Jeramey! I am Riley with Jorgensen for President. Who do you support for President: Trump, Biden or Jorgensen?,” reads one of a seemingly never-ending series of text messages I have received in the past two months.

RoboKiller, an application to detect and block spam calls and text messages, estimates that six billion such messages were sent from June through September across the United States. From September 18th through October 17th, the company estimates an additional 2.1 billion messages were sent, part of an accelerating trend in the run-up to election day.

Over the 30-day window from September 18th through October 17th, the company estimates that Wisconsin residents received 46,098,608 total messages. That volume would indicate that each registered voter received approximately 12.9 messages.

RoboKiller estimates that 29,656,293 (64%) of Wisconsin’s messages came from Republican-affiliated sources, below the national trend of 70% Republican..

Does the texting strategy make a difference? It does. According to a 2018 study, Tech for Campaigns determined that people who received a message were one percent more likely to vote.

That one percent would exceed the approximately 24,000 vote margin Trump defeated Hillary Clinton by in Wisconsin in 2016.

In recent days, as my own phone can attest, many of the messages have become more targeted. Campaigns are using voter data to make sure absentee ballots are returned. My wife just got a text message to remind me to return my ballot (fear not, I already did).

The political parties use a system known as peer-to-peer texting to avoid opt-in regulations governing automated messages. Software, with minimal human intervention, sends out the messages and allows receivers to engage in a conversation with a campaign worker or volunteer that often includes canned responses. The opt-out process is handled entirely by software.