It's now too late to mail them, elections commission administrator said.

By Rich Kremer, Wisconsin Public Radio - Oct 30th, 2020 11:39 am
Get a daily rundown of the top stories on Urban Milwaukee 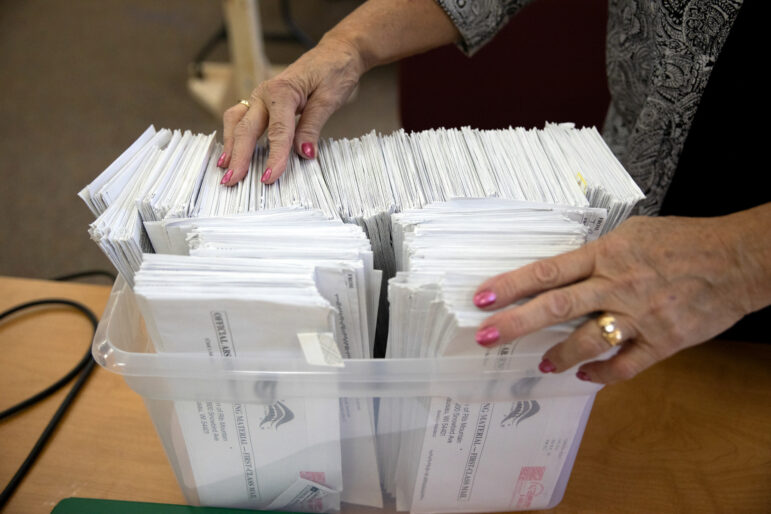 Chief election inspector Sharon Drefcinski alphabetizes and organizes absentee ballots that were received by mail at the municipal center in Rib Mountain, Wis. during the partisan primary on Aug. 11, 2020. Town Clerk Joanne Ruechel sent out 1,348 absentee ballots ahead of the election. Coburn Dukehart / Wisconsin Center for Investigative Journalism

Wisconsin Elections Commission administrator Meagan Wolfe says around 250,000 absentee ballots hadn’t been returned as of Thursday morning and that it’s likely too late to send them in by mail.

As for those outstanding ballots, Wolfe said the U.S. Postal Service can’t guarantee any ballots will make it to election clerks if mailed at this point.

Wolf did caution voters to contact their local clerks before using drop boxes on Election Day.

“I know in some communities you might not be able to use a drop box on Election Day itself,” said Wolfe. “You’ll have to go to the polls or to the clerk’s office or central count to drop off those ballots.”

Municipal and county clerks have done a great job staffing polling places, Wolfe said, and most have recruited emergency workers in case there are shortages.

“But we’re continuing to see less than a need of two hundred poll workers statewide,” Wolfe said. “But in some smaller communities, of course, they may have a smaller pool of people to draw from.”

To address any unforeseen staffing issues, Wolfe said Gov. Tony Evers has mobilized 400 Wisconsin National Guard members for use by the Elections Commission if needed.

Around 250K US Presidential Absentee Ballots Yet To Be Returned In Wisconsin was originally published by Wisconsin Public Radio.