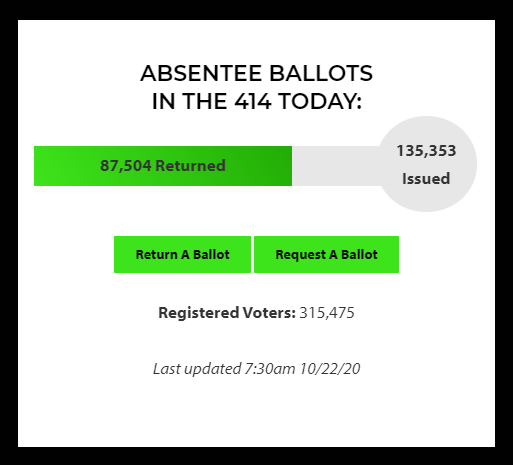 Vote thermometer on the Votes Count in the 414 webiste. Image from the City of Milwaukee.

A new Milwaukee Election Commission voter education website provides a daily update on the number of ballots returned in Milwaukee. It also attempts to quickly and easily answer voter questions.

“This tool allows us to be as transparent as possible about the election,” said Mayor Tom Barrett in a virtual press conference about milwaukee.gov/414votes.

“Our intent with the website is to have this really be the voter information page,” said commission executive director Claire Woodall-Vogg during the Wednesday afternoon event.

The new website is centered on answering questions about four key topics – absentee ballot drop boxes, early voting, voting at the polls on election day and data on returned ballots.

It augments data provided by the Wisconsin Elections Commission that is often aggregated on a countywide basis. It also provides a more accurate picture of the number of people early voting.

After the first day of early voting on Tuesday, the Wisconsin Elections Commission reported 4,025 people voted early in Milwaukee. The city reported 4,861. Woodall-Vogg said the state totals only reflect those that could be entered that day into an electronic records system.

“The state’s data will never include voter registrations in real time,” said Woodall-Vogg of the discrepancy.

Woodall-Vogg is standing by an earlier estimate that between 150,000 to 175,000 people will vote absentee in this election, be it in person or by mail.

At prior press conferences, Woodall-Vogg said a key thing voters can do to speed up counting those absentee ballots is to turn them in before election day. The city can’t process the ballots before election day, but it can sort them into the appropriate wards and review the envelopes for issues.

“Please use your power at the polls to not sit this election out,” said Barrett.

Urban Milwaukee reported Wednesday that for the first time in this election Milwaukee voters have returned the greatest number of ballots, but the city trails the state in the percentage of ballots returned.

“One of the reasons for creating our thermometer is to really drive voters to return their ballots,” said Woodall-Vogg.

As of Thursday morning, 87,504 of the 135,353 requested absentee ballots were returned. The city reports 4,773 voters cast an in-person absentee ballot on Wednesday.

For more information on early voting, visit the city’s new website or read our coverage from earlier this week. Early voting runs through November 1st.