The Foxconn Deal Was Never Real

The Verge interviews employees who describe nightmare-like conditions and a completely phony project. 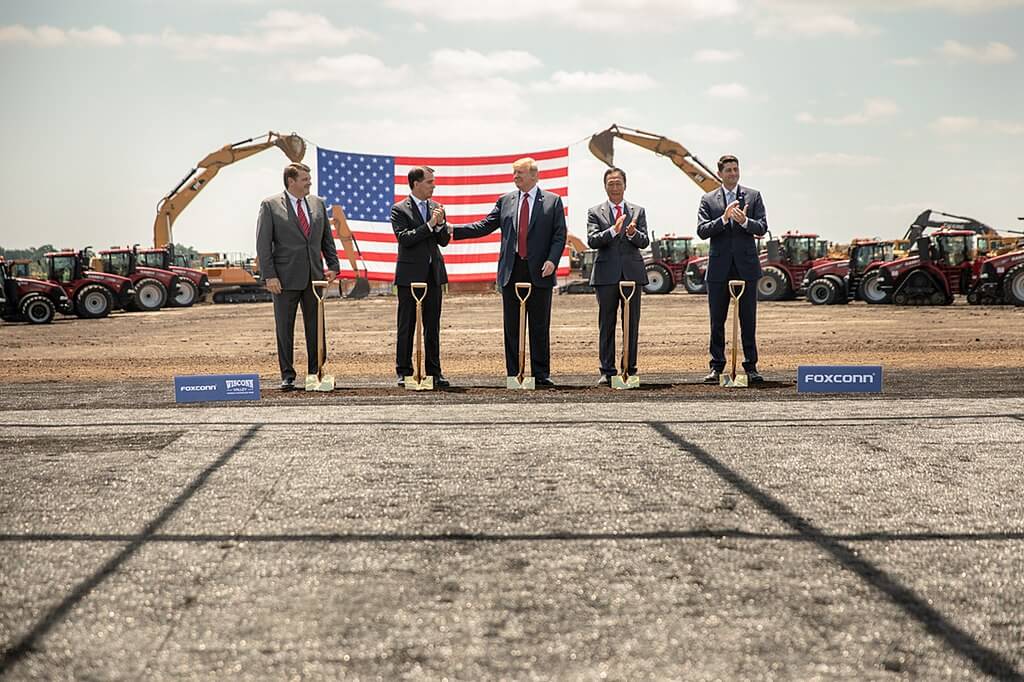 The story is called “The Eighth Wonder of the World*” with the asterisk then spelled out: “wonder not guaranteed.”

The headline for the story by The Verge, which covers the technology industry, references the wondrous pronouncement by President Donald Trump, which was itself a hyped-up version of Republican Gov. Scott Walker‘s promise that the deal he signed with the Taiwanese company Foxconn would transform the state economy. Urban Milwaukee has done many stories documenting constant flip-flops by the company and problems with the deal and questioning whether the “LCD factory” in Mount Pleasant was actually what it claims to be.

Now comes this story, based on interviews “with 19 employees and dozens of others involved with the project, as well as thousands of pages of public documents” and which reveals “a project that has defaulted on almost every promise. The building Foxconn calls an LCD factory — about 1/20th the size of the original plan — is little more than an empty shell. In September, Foxconn received a permit to change its intended use from manufacturing to storage,” the story reports.

“Even the handful of jobs the company claims to have created are less than real: many of them held by people with nothing to do, hired so the company could reach the number required for it to get tax subsidy payments from Wisconsin.”

And even that ploy failed as the Wisconsin Economic Development Corporation has repeatedly found the company didn’t come close to hiring the number of employees required under the contract, and has now told the company it can never get any tax credits until it agrees to a new contract that aligns with the company’s actual plan for development, rather than the promises it made to Walker that have never been realized. “Once Foxconn is able to provide more accurate details of the proposed project, such as its size, scope, anticipated capital investment, and job creation, WEDC would be able to offer support for the project with tax incentives,” as a letter to Foxconn from Missy Hughes, CEO of the WEDC, informed the company.

Months after the 2018 groundbreaking for the supposed factory in Mount Pleasant, The Verge’s reporter Josh Dzieza recounts, “the company was racing to hire the 260 people needed to receive the first tranche of payments from the lucrative subsidy package… Recruiters were told to hit the number but given little in the way of job descriptions. Soon, the office began to fill with people who had nothing to do. Many just sat in their cubicles watching Netflix and playing games on their phones…”

“It was just the beginning. Foxconn would spend the next two years jumping from idea to idea — fish farms, exporting ice cream, storing boats — in an increasingly surreal search for some way to generate money from a doomed project…

“The problem, employees soon learned, was that Foxconn’s planning did not extend far beyond the broad promises made to Wisconsin officials: an enormous LCD plant, some other manufacturing, lots of jobs. There appeared to be no research into the market for products Foxconn might make or the costs of producing those products in Wisconsin. Employees know this because many of them, no matter what role they had been hired for, were told to figure out what Foxconn should do in Wisconsin themselves.

“’They asked me to create a business in Wisconsin, to come up with a business model, whatever I thought would make money,’ said one of several engineers who was training in Taiwan when Foxconn called him home to help figure out what to do. He came to a conclusion shared by many who joined the project: ‘The most common misunderstanding with Foxconn is people here thought Foxconn had a strategy and a business plan when they were coming into Wisconsin. They did not. They had no plans at all.'”

Foxconn has a long history of making promises to countries and some states in the U.S. and then walking away from the deal, but Wisconsin was different, Dzieza reports, because the deal was so important to Trump. “If the factory was meant to earn Trump’s goodwill…the company couldn’t simply vanish as it had elsewhere. Foxconn was stuck in Wisconsin, and it needed to find a way to cut its losses. Employees at every level of the project were enlisted in a search for something — anything — Foxconn could do to generate revenue.”

Employees “searched for things in Wisconsin they could export to China: cosmetics, designer handbags, ice cream, carp.” Alan Yeung, Foxconn’s director of US strategic initiatives, asked employees  “to draw up a plan for building an aquaponic fish farm in Mount Pleasant, having been inspired by a company in northern Wisconsin and reasoning that Foxconn had access to cheap water the state provided for LCD manufacturing. They briefly explored doing something with esports, maybe sponsoring a gaming team that could use the empty innovation centers, according to one source. A plan to export dairy to China got as far as a meeting with the Wisconsin Department of Agriculture before collapsing. The department confirmed it met with Foxconn representatives about the plan in the spring of 2019 but said Foxconn paused ‘to conduct more research’ and no additional discussions have taken place.”

Yeung also pushed a “Smart Cities” venture with Racine, whose Democratic Mayor Cory Mason did all he could to make happen. It would involve “camera-festooned autonomous vehicles [that] would patrol high-crime areas… guided by 5G cells mounted on lamp posts. Self-driving vehicles — retrofitted golf carts at first, then shuttles as soon as 2020 — would ferry Racine’s workers to Foxconn’s campus.”

“In March 2019, Mason and Foxconn’s Woo released a memorandum of understanding to make the vision a reality,” the story reports. “But when city officials started asking basic questions about the sort of infrastructure they needed to build in order to accommodate Foxconn’s technology, Foxconn employees found they were unable to get clear answers from the company… ‘The whole thing was a facade,’ said another employee. ‘It was an idea that Alan baked up and tried to commit the business to.'”

But Foxconn eventually said the deal was too expensive and made no sense, the employee noted, and “Poor Racine was left scratching their head and saying, ‘What just happened?'”

“Foxconn only ever got as far as buying the golf carts,” Dzieza reports, which “arrived from China disassembled, in orange, pink, and other festive colors.,, Unable to make them autonomous, Foxconn put them in storage in the multipurpose building. At one point, the company discussed outfitting them with lights and turning them into security vehicles, but the subsidiary in charge of security” refused to pay for the carts. “As the divisions bickered, bored employees would come down from the Milwaukee headquarters to race the carts around the empty building, until the batteries finally died.”

By the spring of 2019, “business owners who had tried to become Foxconn suppliers realized they had been ghosted.” One said he “entered his business into the supply chain system and never heard back; another had the company go dark after several meetings; a third says he filled out an extensive survey only for a consultant to request approximately $10,000 to have his business vetted for Foxconn’s mysterious project. (He declined.) One explanation for this is simple: Foxconn, not knowing what it was going to make, hadn’t known what suppliers it needed.”

“Earlier partnerships announced with local companies like Rockwell Automation had been followed by total silence. (Employees say they quickly fizzled; Rockwell did not return a request for comment.)”

As the company scrambled to find anything it could manufacture, a Foxconn executive “flew to DC to meet with Trump trade adviser Peter Navarro, who suggested Foxconn become a vendor to the US General Services Administration… Employees searched for products Foxconn already made that were eligible for the GSA, but everything was either unprofitable or already being sold by major Foxconn customers like Dell and Cisco, according to a source with knowledge of the project, which would mean Foxconn would risk undermining actually profitable business relationships to salvage the Wisconsin project.”

To gain the tax credits from the state, Foxconn hired some 580 people at the end of 2019, with sixty percent hired in the final two months. But as Urban Milwaukee has reported, the contract has a huge loophole, allowing the company to collect the tax credits for capital investments even if the employees are then laid off. Which is exactly what happened, Dzieza reports. “The layoffs began with the new year. Starting in January, when the promised LCD factory was originally scheduled to open, Foxconn instead began letting employees go in batches…. ‘It was a pump and dump,’ said an employee.”

Many employees left good jobs to take what turned out to be fake jobs with Foxconn, the story notes, with some describing abusive treatment by their bosses.

“The state has upheld our part of the contract,” said Joel Brennan, Secretary of the state Department of Administration , in an interview with Dzieza. “Unfortunately, Foxconn hasn’t been able to do that on their side.”

That may be the understatement of the year. One former employee put it this way: “We got screwed. The state got screwed.”

4 thoughts on “Back in the News: The Foxconn Deal Was Never Real”