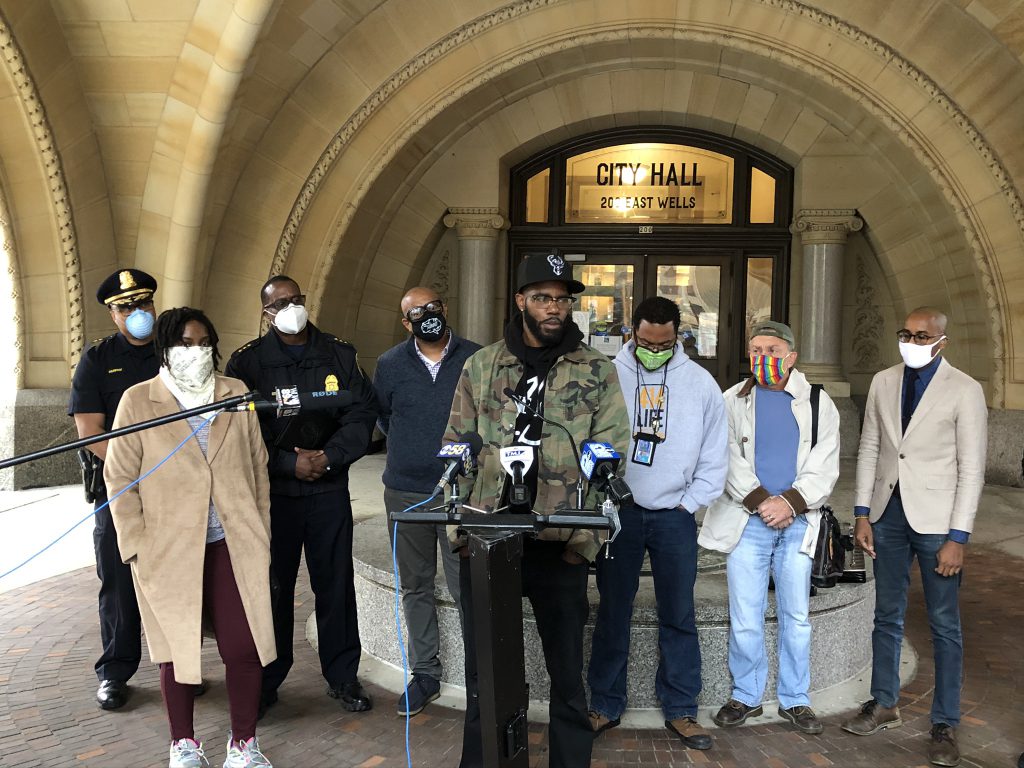 A reconstituted Milwaukee committee has been formed to help create a better relationship between the community and Milwaukee Police Department.

The Community Collaborative Commission (CCC) will carry forward suggestions from a draft report by the US Department of Justice. The report, a widespread critique of the MPD under then-Chief Edward A. Flynn and initiated in November 2015, was ultimately dropped under President Donald Trump‘s administration, but was leaked and includes a long list of recommendations for improvement in  department practices.

“We want to establish a precedent with this commission,” said  chair Nate Hamilton at a press conference Modnay afternoon. He said the 16-member commission will work to enhance trust and reduce the level of fear, both for Milwaukee’s residents and its police officers.

The report was requested by Flynn after federal prosecutors declined to charge now-fired officer Christopher Manney for fatally shooting Hamilton’s brother Dontre in 2015.

The CCC is a revised version of what was called the Community Collaborative Committee, and was formed to oversee the federal report’s recommendations, but had little success. The newly formed group is now called a commission, which suggests it might have more clout. It also has more members and more groups in the city represented than the old committee did. But the commission has no political authority and instead draws its power from political clout of the many groups represented on it. Its power may also depend on cooperating with and getting a buy-in from the police department and Fire & Police Commission.

“Obviously we understand this is a two-way street for what the community needs and we are committed to being part of that,” said MPD Assistant Chief Jeffrey Norman. The newly-promoted assistant chief is among six finalists for the job of chief.

“It’s our job as a commission to make sure these things have follow through,” said Hamilton of any changes. He said the group would be looking at both the DOJ report as well as the city’s 2018 settlement with the American Civil Liberties Union.

It’s also tasked with helping design a new MPD standard operating procedure (SOP) for community-oriented policing. Then-Chief Alfonso Morales was tasked with working with the commission on the SOP as part of 11 directives issued by the Fire & Police Commission before he was demoted.

“People want their tax dollars to be valued. They don’t want to keep paying for lawsuits and wrongful deaths,” Hamilton said.

Hamilton noted that the commission’s membership, appointed by the Common Council and mayor, is diverse and helps it focus on underrepresented citizens including members of the African American, Latinx and LGBTQ communities.

The commission members, unlike those at the Fire & Police Commission, are all volunteers. Council President Cavalier Johnson and Alderman Ashanti Hamilton, no relation to Nate, praised the members and police department for their commitment.

One change that might help the new commission: it now has a staff assistant working with it from the City Clerk’s office. Information on the commission, including agendas and reports, is available in the city’s legislative record system. Hamilton expects the group to meet every two weeks.