Republicans attack commission, accuse it of being a partisan ploy.

By Shawn Johnson, Wisconsin Public Radio - Oct 3rd, 2020 04:20 pm
Get a daily rundown of the top stories on Urban Milwaukee 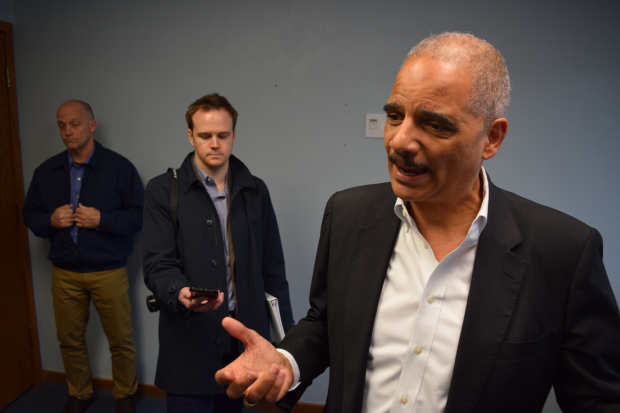 Former Attorney General Eric Holder told members of Gov. Tony Evers‘ “People’s Maps Commission” at their first ever meeting that they had a chance to draw a fairer redistricting plan that would better represent the people.

But the appearance by Holder, a member of President Barack Obama‘s cabinet who now runs the National Democratic Redistricting Committee, drew familiar charges by Republicans that the commission was not living up to its nonpartisan billing.

Evers formed the commission earlier this year with the stated purpose of drawing new legislative and congressional maps that are “free from partisan bias and partisan advantage.”

While the commission is free to suggest maps, it’s up to the Legislature to approve them. GOP leaders have already signaled they don’t plan to do that.

States draw new legislative and congressional maps each decade following the release of the U.S. Census. The last time that happened in 2011, Republicans controlled both the Legislature and the governor’s office, letting them draw maps that helped them hold power for the past decade.

Holder told commission members attending the virtual meeting that there was a better way to draw maps than how it’s been done under the status quo.

“The work that you are doing is fundamentally about ensuring that you have a government that represents the people,” Holder said. “With fair maps, you can help lower the temperature in Madison and in the halls of Congress in Washington, D.C. and with fair maps, you’re more likely to have representatives that truly reflect the will of the people.”

The state Republican Party issued a statement saying Holder’s appearance at the meeting showed the commission was a “farce.”

In addition to Holder, commissioners also heard from Ruth Greenwood, an attorney and redistricting expert for the Campaign Legal Center. Greenwood is one of the lawyers who challenged Wisconsin’s current legislative map as a partisan gerrymander in a case that made it all the way to the U.S. Supreme Court. Greenwood’s organization also challenged a Maryland congressional map that was drawn by Democrats.

Greenwood said the last redistricting plan was drawn with partisan advantage in mind.

“As for what it meant for the communities, they never asked,” Greenwood said. “They were just a couple of people in a room deciding what everybody else in the state should have to live with.”

Greenwood said that the next maps needed to adhere to traditional redistricting criteria, with districts being compact, contiguous, and roughly equal in population. They also need to follow the Voting Rights Act and preserve communities of interest.

But Greenwood said that if members of the “People’s Map Commission” wanted, they could also emphasize other factors, like requiring competitive districts.

“If that’s something that you decide is an important criterion, I hope that you draw it,” Greenwood said.

Members of the public who testified at the meeting talked about feeling disenfranchised with the current system.

“It’s not a Democratic or a Republican issue. It is a people issue,” said Dan Theno, a former Republican state senator from Ashland who served in the Legislature in the 1970s and 1980s.

“The process has always been partisan,” said Brady Foust of Eau Claire. “The only way to eliminate this cheating is to completely remove humans from the process by relying on computer algorithms to draw maps.”

Thursday’s meeting was the first of eight meetings of the commission scheduled between now and April. It won’t begin work on its version of a proposed map until after census results are released.