By Shawn Johnson, Wisconsin Public Radio - Sep 30th, 2020 09:31 am
Get a daily rundown of the top stories on Urban Milwaukee 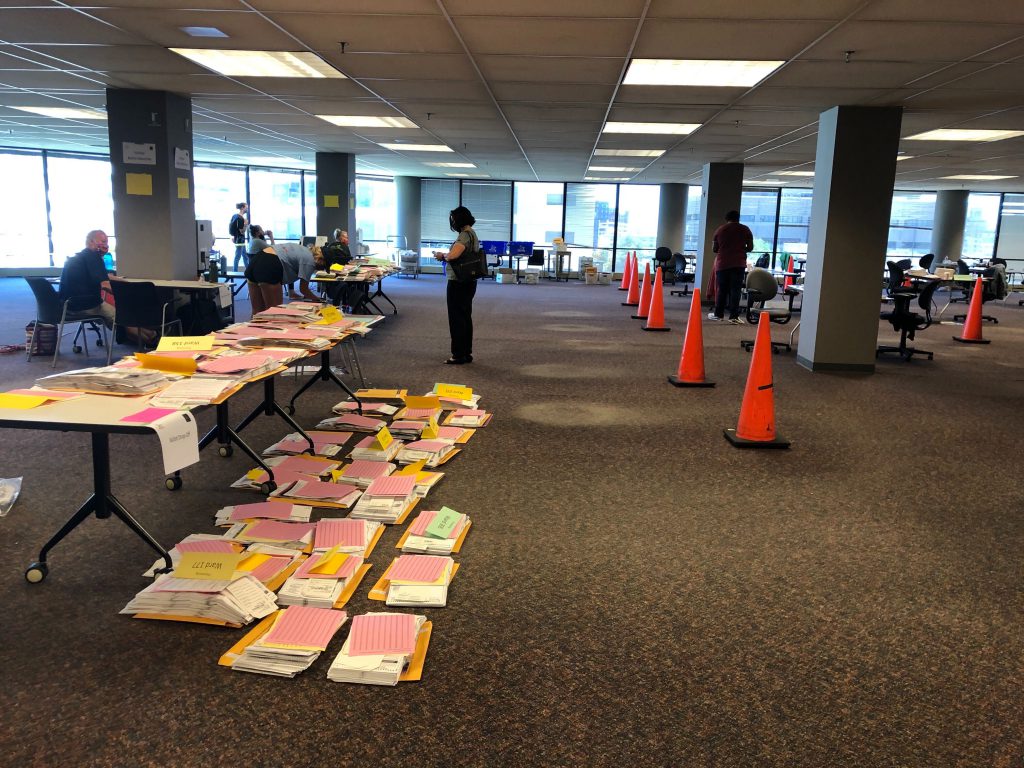 Ballots sorted by ward during the August 11th election, an election observer looks on. Photo by Jeramey Jannene.

Absentee ballots could be counted for up to six days after the Nov. 3 election under a ruling handed down by the 7th Circuit Court of Appeals Tuesday.

If the order is allowed to stand, it could set the stage for an “election week” in Wisconsin, where the winner of a key swing state isn’t immediately known on the night of the election.

The 7th Circuit’s order reinstated an earlier ruling by Judge William Conley who sided with Democrats in a lawsuit seeking the six-day extension for clerks to receive and count ballots as long as they are postmarked by Election Day.

That lawsuit, which was brought by the Democratic National Committee, Disability Rights Wisconsin and Black Leaders Organizing for Communities (BLOC), argued that more time was needed to handle the influx of absentee ballots cast by voters in Wisconsin’s latest election held during the coronavirus pandemic.

The 7th Circuit initially stayed Peterson’s order, meaning they kept it from going into effect while they considered the case.

But Tuesday’s order lifted that stay, with a unanimous three-judge panel ruling that the Republican National Committee, Republican Party of Wisconsin and the Wisconsin Legislature lacked the legal standing to challenge the case.

“None of the appellants has suffered an injury to its own interests, and the state’s legislative branch is not entitled to represent Wisconsin’s interests as a polity,” wrote the appeals court judges.

In addition to a six-day extension for counting absentee ballots, the ruling would move the deadline for registering to vote online and by mail from Oct. 14 to Oct. 21.

Republicans could yet appeal the ruling to the U.S. Supreme Court, where conservatives currently hold a 5-3 majority following the death of Justice Ruth Bader Ginsburg.

The U.S. Supreme Court let stand part of a ruling by Conley earlier this year that granted a six-day extension for returning absentee ballots in Wisconsin’s April 7 election. But justices ruled in that case that ballots must be postmarked by the day of the election.