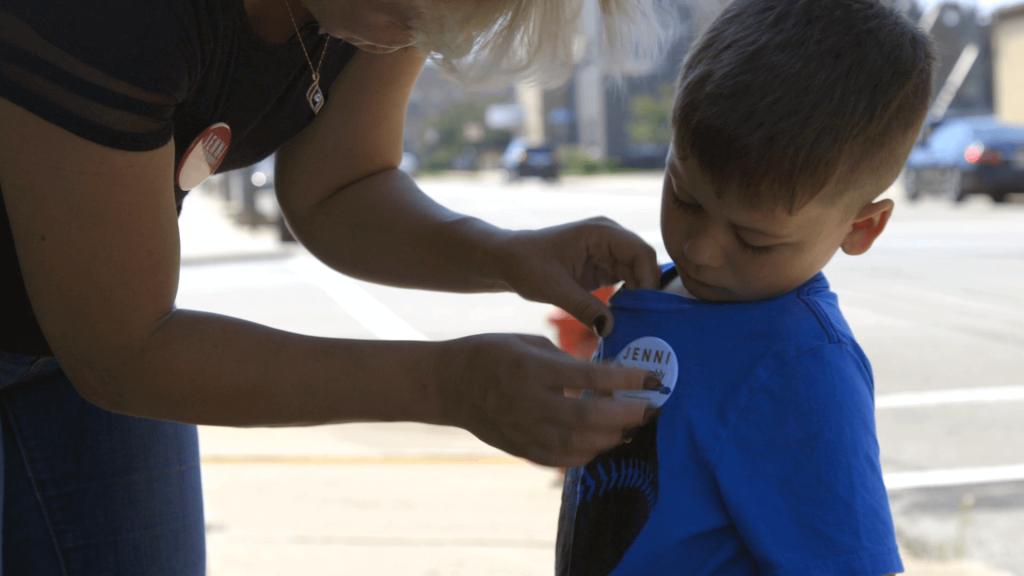 A still from “Can You Hear Us Now?” a new documentary about the Wisconsin 2018 election. Photo courtesy of Twelve Letter Films.

Less than two months from Election Day 2020, a new documentary looks back at Wisconsin’s 2018 election — when Democrats swept statewide offices but remained locked out of the majority in the Legislature.

“Can You Hear Us Now?” follows the story of two unsuccessful candidates in that election, along with a handful of other activists in the state who have been struggling to reverse the Republican Party’s hegemony over the state Legislature and the legacy of former Gov. Scott Walker.

The big news of Wisconsin has been widely told over the last decade, from Walker and the Republican-led Legislature’s attacks on labor unions to gerrymandered districts that have kept the GOP solidly in control even when more voters have cast ballots for Democrats than Republicans running for the Assembly and state Senate. But filmmakers Susan Peters and Jim Cricchi sought to bring the narrative down to the ground level, telling the story through the eyes of grass-roots activists and aspiring candidates.

Other films have delved into the details of voter suppression, gerrymandering and other policies that have contributed to the current status quo, she says. “But, really, this is more of a personal story of — what are the implications? What does it feel like?”

Cricchi directs “Can You Hear Us Now?” as well as being the cinematographer  and editor. The two, who are married, are co-producers.

The 87-minute documentary focuses on the 2018 race of Jennifer Estrada of Manitowoc, who ran against Republican incumbent State Rep. Paul Tittl (R-Manitowoc) for the Assembly’s 25th district. It also spends time with another candidate that year, Rebecca Clarke, who challenged State Rep. Terry Katsma (R-Oostburg).

Also included are Sheila Plotkin of Madison, a retired teacher who has been using the state’s open records law to expose the gulf between what lawmakers do and what their constituents want, and Molly McGrath, who has been on a mission to help people secure photo IDs now required under laws blamed for thwarting thousands of eligible voters who were unable to cast ballots in the 2016 election.

Sachin Chheda and Bill Whitford also make an appearance; they were instrumental in organizing the lawsuit against the 2011 gerrymandered Wisconsin legislative maps, winning at the federal appeals court in Chicago before the U.S. Supreme Court, in a split decision favored by the conservative majority, reversed the ruling.

Tony Evers and Mandela Barnes, who won their races for governor and lieutenant governor in 2018, make brief appearances. “We wanted the governor’s race to sort of be on the edge of the story,” says Cricchi — although the December 2018 lame duck session that stripped some of the newly elected Evers’ powers as governor, along with those of Democratic Attorney General Josh Kaul, figures in the final part of the film.

The couple came to Wisconsin in 2017 to make a shorter documentary about undocumented workers in the Wisconsin dairy industry. It was based on one of the projects from the Wisconsin Center for Investigative Journalism, and in their conversations with the center’s founders, Andy and Dee Hall, they met Sheila Plotkin. Conversations with others led them to their focus on the 2018 election and their decision to follow the Estrada and Clarke campaigns.

Each of the candidates offered a distinctive story that tied their races for office with their direct personal experiences. Before running for the Assembly in 2018 Estrada was an organizer with Voces de La Frontera whose husband was deported to Mexico seven years ago.

“She is someone who is working class, working multiple jobs, a single mom with five kids and yet thinks it is worth her while to run for office, because nobody else will do it,” Cricchi says.

Clarke had lost her job as a science educator and a park employee. Many of her colleagues lost jobs “when Scott Walker cut the funding for science jobs and park jobs,” he says. So in that way, “she was directly impacted by some of the policies that we were looking at.”

Her race threw into sharp relief the significance of the gerrymandered legislative district, he adds — and both races illustrated how hard it is to find candidates in districts where incumbents are deeply entrenched. “That’s a consistent problem, in Manitowoc and a lot of the other districts where they can’t get somebody to run against the incumbent,” Cricchi says.

Both Estrada and Clarke lost their races by wide margins. And as Cricchi and Peters were editing the film the lame duck session took place; they used archival footage to tell some of that story.

Ending the film on the right note presented a challenge.

“For a while we were showing cuts that were close to the final one to people, and the first thing they would say as soon as we turned it off was — ‘Oooooohhh,’” says Peters, mimicking a despairing groan.

“We had to overcome that without being simplistic,” she continues. “We don’t want to gloss over how bad it really is.”

But they also didn’t want to end up in the pit of despair.

By directing their focus instead on people like Plotkin, Estrada, Clarke and the rest, the filmmakers sought to portray not only the challenges that activists like them have faced but also their persistence — even when the odds have not been in their favor.

“This is really much more than an uphill battle,” says Peters. “Some of them are running in races that, literally, they know they cannot win. There’s no happy outcome. Despite the fact that they know what they’re up against, why are they still doing it? What drives someone like that to continue to do work, for no pay, having people slamming doors in their faces, even when they know they’re not going to win. And just that kind of personality, and quandary, is fascinating.”

The COVID-19 pandemic upended their search for distribution; film festivals were canceled, and with them showings they were hoping for. But it made the Martha’s Vineyard Film Festival in August, and this week it was part of the Newburyport Documentary Film Festival in Massachusetts, running through Thursday, and available to viewers online.

A showing at the University of Wisconsin Cinematheque has been scheduled for the first week of October (though not yet officially announced), and it’s scheduled for the Bend Film Festival in Oregon Oct. 8-25. It will be available on for on-demand streaming soon through Amazon and Vimeo.

As personal as the film is in its focus, “I think a lot of people that have seen the film, who it’s resonated with, wherever they’re from, it made them aware to focus on state politics and see how important a state Legislature is,” Cricchi says. “That’s something that isn’t paid attention to… something that people come away with when they watch it — ‘What’s going on in my state? Who’s in control?’”

It also offers “a cautionary tale” not just for other states, but for the nation, they believe.

“Changing the rules in terms of how policies are being formulated and how laws are getting passed — that has happened in Wisconsin over the course of a decade,” Peters says. “And that’s now happening on a federal level in a really similar way. So I think there’s an ability to see what the effects of that are in Wisconsin, before it hits the rest of the country.”