What the Green Party ruling tells about the Wisconsin Supreme Court.

Howie Hawkins and Angela Walker, the candidates for president and vice president running on the Green Party ticket, were unable to get on the Wisconsin ballots.

On August 4, 2020, the Green Party candidates filed nomination papers with the Wisconsin Elections Commission to be placed on the ballot for the November 3, 2020 general election. Three days later, Allen Arntsen, a retired Foley and Lardner attorney, filed a complaint with the Commission alleging that many of the signatures appearing on the nomination papers did not list Walker’s correct address. This issue apparently stemmed from Walker’s move from one house to another, resulting in an address on the earlier signature papers that disagreed with that on her Declaration of Candidacy.

The Election Commission excluded the signatures with the previous address and informed the Green Party campaign that the loss of these signatures left a total below the 2,000 required to be placed on the ballot. The Green Party was told it could file a document in the next several days explaining the address discrepancy. Clearly, they were unwise not to do so.

On August 20, the Wisconsin Elections Commission held a special teleconference meeting to discuss and act on ballot access challenges for independent candidates. At that meeting, Andrea Mérida, the Green Party campaign manager, was told that the time for presenting evidence had passed. (A video of this meeting is available on Wisconsin Eye. The discussion on the Green Party begins around time 3:07:50.)

At this meeting, the Commission deadlocked 3-3 on Arntsen’s challenge to the validity of 1,834 signatures, effectively sustaining most of his challenge. This left the Green Party candidates with 1,789 valid signatures, less than the 2,000 required for ballot access, meaning that their names would not appear on Wisconsin’s 2020 general election ballot.

On September 10, the Wisconsin Supreme Court issued an order on a 4-3 vote saying the mailing of absentee ballots should be halted while it considers the case, which threatened to disrupt and delay the November election. But four days later the court issued an unsigned opinion denying the Green Party’s request. In its order, which took up 9 of the opinion’s 50 pages, the four judges in the majority stressed the lateness of the day, that most ballots had already been printed and some probably mailed, and the closeness to September 17 when absentee ballots must be sent to voters.

Most of the 50 pages was taken up by dissents: Justices Patience Roggensack (7 pages), Annette Ziegler (31 page), and Rebecca Grassl Bradley (3 pages). All three joined Roggensack and Ziegler’s dissents.

While the justices in the majority are not listed, by elimination they are Justices Ann Walsh Bradley, Rebecca Dallet,Brian Hagedorn, and Jill Karofsky. The inclusion of Justice Hagedorn is especially intriguing as its another example of him not going along with his fellow conservatives on the court. Apparently choosing pragmatism over high principal.

Overall, I think the court majority did the right thing, especially considering that the November election was shaping up to be a difficult one, that the coronavirus will likely cause a surge in absentee and early voting, Trump’s attacks on absentee ballots and threats to reject the outcome of the election.

Still there are elements that are concerning. In her dissent, Justice Roggensack claims that the party was also given the option of presenting evidence at the Commission’s August 20 meeting:

The Commission’s attorney, Nathan Judnic, sent an email to the Hawkins-Walker campaign manager, Andrea Mérida, telling her of Arntsen’s challenge. Judnic told Mérida that she had the options of filing a sworn written response or appearing at the August 20, 2020 Commission meeting to present evidence contesting Arntsen’s challenge or doing both.

If this claim is true, that the Green Party acted in good faith on incorrect information, it would seem incumbent on the Commission not to punish the party for their mistake.

A second concern is the injection of partisanship or its appearance into Wisconsin’s regulation of elections. By law, members of the Wisconsin Elections Commission are appointed by party: three Republicans and three Democrats. This would seem to present an insuperable conflict of interest for the commissioners: are they pursuing the best interest of their parties or of the Wisconsin voter?

The present Elections Commission stems from Republican politicians’ ire with its predecessor, the Government Accountability Board (GAB) and its investigation into coordination between then-Governor Scott Walker and a variety of supposedly independent political actors. Such coordination was illegal at the time in Wisconsin and is still illegal in federal elections. As a  punishment by Republican legislators, the nonpartisan GAB was dissolved and replaced with the bipartisan Elections Commission.

Although never mentioned in the hearings, the issue driving attention to the Green Party ballot question was the widespread belief that in 2016 the Green Party drew enough votes away from Democrats to flip the results in Wisconsin and two other states to Donald Trump and threatens to do so again this year.

The red bar on the graph below shows Trump’s margin over Hillary Clinton in Wisconsin, Michigan, and Pennsylvania. The green shows the Green Party vote. In Michigan, a small percentage of Green voters could have flipped the state. In the other two states, a flip would have required almost all Green voters to vote for Clinton.

In some projections, the Libertarian party is added to the mix. Certainly, the volume of Libertarian votes is sufficient to flip the state. However, it is unclear what libertarian voters would choose: Clinton, Trump, or not voting. 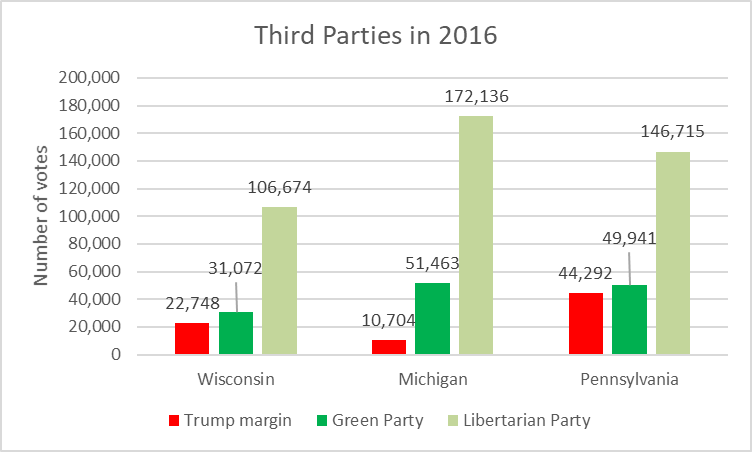 For a view of what may be happening with third party voters this year see this article from NBC of people voting for the Green or Libertarian parties in 2016. It found they favor Biden over Trump this year by a two-to-one margin. (But notice the very small sample size and the data is extracted from national, not state, polls.)

The irony of third parties is that they hurt the chances of the major party that most closely aligns with them. The Green Party has little in common with the Republican Party except for a desire to get the Green Party on the ballot. (For an issue comparison, see the Green Party’s “Us versus Them” website.)

There are two disturbing aspects of this case. First, there is the underlying suspicion that the Commission vote may have been driven much more by their parties’ political calculations than their judgments of the merits of the Green Party’s case. All six members of the commission voted the way the interest of their parties would dictate. All three Republicans would have put the Green Party candidates on the ballot; all three Democrats voted against putting them on.

Whether or not partisanship was driving the decision, the perception is damaging. A return to a nonpartisan elections commission would help counter Wisconsin’s increasingly dysfunctional political climate.

Would a revived non-partisan Government Accountability Board have allowed the Green Party on the ballot? Justice Rebecca Bradley has no doubt, asserting that “Wisconsin law unquestionably requires that Mr. Hawkins and Ms. Walker appear on the ballot.” Justice Ziegler describes this case as “perhaps one of the most important cases in a judicial lifetime.”

By the time this case reached the Wisconsin Supreme Court, however, it was not the fate of the Green Party or whether the Elections Commission had made an incorrect decision that was most important. By then the timing of election and how long it takes to print election ballots raised the question whether the Supreme Court would throw the upcoming election into chaos. The fact that three of the seven justices were willing to chance that outcome — and that only a switch by Hagedorn prevented this —  is the most disturbing implication of this entire affair.