Why Unions Matter More Than Ever

All unions need to reexamine their role in this time of racial reckoning. 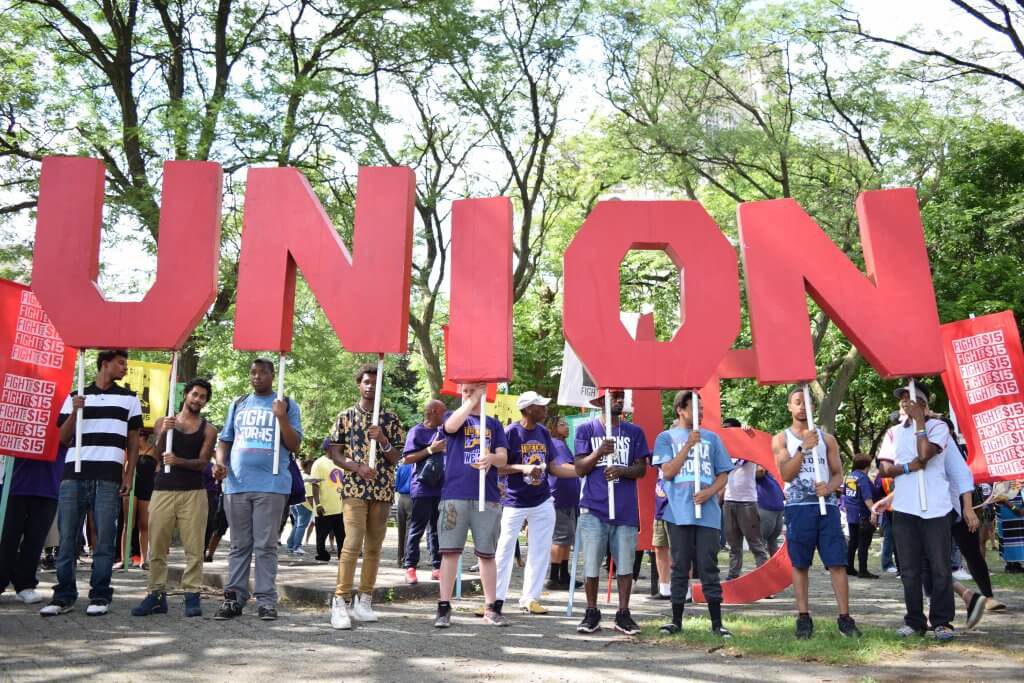 Pro-labor activists at a protest before a Democratic presidential debate. Photo by Andrew Roth/Wisconsin Examiner.

Labor Day 2020 comes at the end of an historic summer of racial reckoning for our country. The police shooting of Jacob Blake in Kenosha laid bare the stark realities of systemic racism right here in Wisconsin.

I worked at the American Motors/Chrysler plant in Kenosha for 30 years and was the president of UAW Local 72 and later a regional rep for the union. I am currently the vice chair of the UAW Wisconsin Community Action Program and the vice president of Local 72.

Local 72 was the union for workers at the American Motors/Chrysler plants in Kenosha for 75 years prior to the final plant closing in 2010. I was fortunate to work in a plant with thousands of people of many races and nationalities. We were there to make a decent living and provide a better life for our families. We all came together in our local union to fight to realize our shared hopes and dreams.

Local 72, a majority white union in an overwhelmingly white town, was the first local union in the country to negotiate a paid day off to honor Martin Luther King, Jr., five years before his birthday was recognized as a federal holiday.

Every year starting in 1981, the Local put on a huge MLK commemorative program that brought together the union and community members. Leaders like Jesse Jackson, Congressman John Lewis, and Dr. Joseph Lowery spoke at those events. Some of the young protesters in Kenosha today sat in our union hall with their parents and heard those great speakers.

Our UAW local stood against racism and had an active Civil and Human Rights Committee that investigated complaints of discrimination. There was no doubt where our union stood on racial justice.

When manufacturing jobs like those at Chrysler leave, unions are destroyed, people lose good paying jobs and communities suffer. Add the ongoing political attacks on unions like “right to work,” or Act 10 and our communities lose the influential role that unions can and have played in the fight for racial justice.

The decline of unions is directly related to the rise in income inequality. Austerity budgets that starve urban and rural areas of much-needed resources for roads, schools and health services add fuel to this crisis of inequality. This type of inequality feeds distrust and division. The door is opened for a bigoted proto fascist like Donald Trump to play on the anger, fear, and racism of many white Americans.

Our nation and our local communities are at a crossroads. We have seen the brutal police violence against Jacob Blake, George Floyd and too many others. We have seen Trump encourage white supremacists across the country and excuse the vigilante who killed two and severely wounded a third in Kenosha. These are the battle lines where labor must join hands with Black and Brown communities to stand for justice.

While unions have a long history fighting to give workers a voice and improve wages and working conditions, today’s labor movement is teaching us all new lessons. Teachers have walked out for their students’ education and the health concerns of all. Fast food workers have walked out for a living wage. Professional athletes have used their collective power to bring sports to a halt to demand justice. All unions need to reexamine their role in this time of racial reckoning and be active participants in the fight for social justice and proclaim that Black Lives Matter.

Donald Trump is an existential threat to unions, to living wages, to retirement security, to racial justice and to our democracy itself.

There are no sidelines in Trump’s America. On this Labor Day 2020, labor has an obligation to join with Black and Brown communities to demand an end to racial injustice, declare that Black Lives Matter and organize against the most dangerous president in our country’s history.