Check the Wisconsin election website to see if you've already requested a ballot.

By Hope Kirwan, Wisconsin Public Radio - Sep 4th, 2020 10:18 am
Get a daily rundown of the top stories on Urban Milwaukee 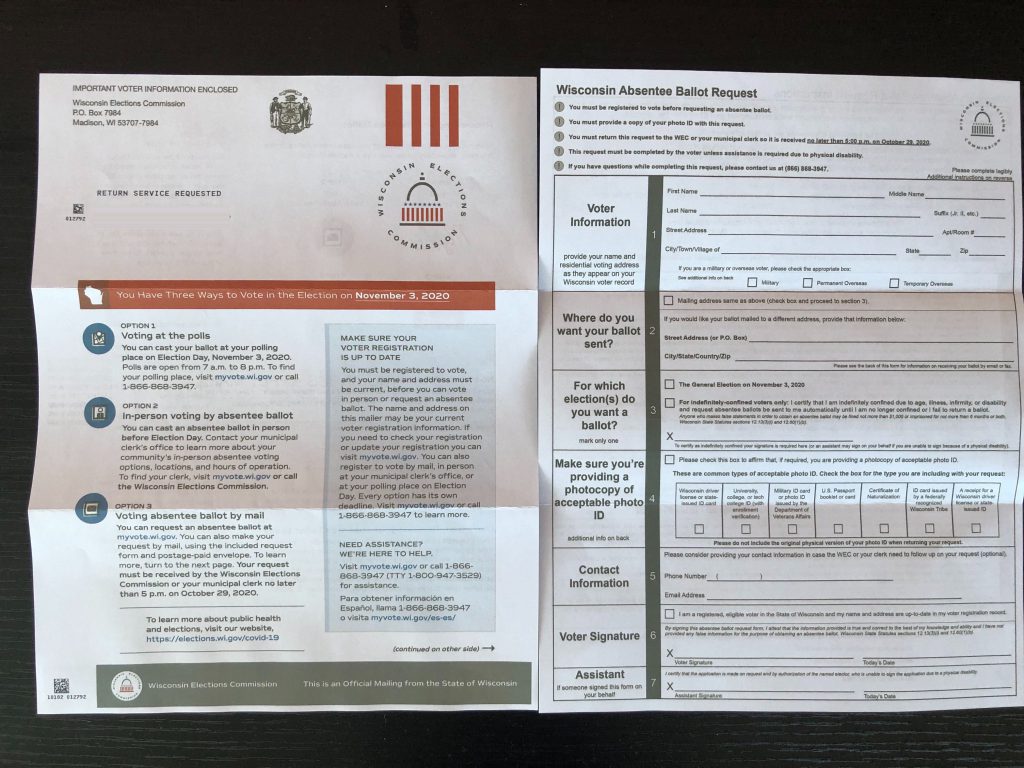 As Wisconsin clerks gear up for the November election, some officials have heard confusion from voters about absentee ballot applications appearing in mailboxes this week.

On Tuesday, the Wisconsin Elections Commission sent information on absentee voting and an application to receive a ballot by mail to 2.6 million registered voters in Wisconsin. It’s part of an effort to prepare for the Nov. 3 election after a record number of Wisconsin voters cast mail-in ballots in April due to COVID-19.

Spokesperson Reid Magney said the commission created the mailing list in late June based on voters who had not already requested absentee ballots for November.

“Since then, maybe 200,000 people have requested absentee ballots. So there are going to be some people getting the mailing who have already requested their absentee ballots, and if they have, they don’t need to worry about it,” Magney said.”

Maggie McClain from the Madison City Clerk’s office said they started receiving calls on Wednesday from confused voters who thought they had already requested an absentee ballot for November.

“In a lot of cases, they might have done so already,” McClain said. “We will check it for them, but we are also encouraging folks … (to) check the My Vote Wisconsin website.”

McClain said the website will show people if they already have an absentee ballot request on file.

She said sending in the paper application from the state won’t hurt someone who already requested an absentee ballot.

“We won’t mess with that existing request just because we received a new one,” McClain said. “But it does take some time on our end. So if we get thousands and thousands of (the paper applications), it does take our time away from getting the requests completed for folks who didn’t have a request on file already.”

Magney said he’s also heard concern from some voters who received two copies of the mailing under different spellings of their name or a maiden name if they recently updated their registration. And he said there is the possibility that recently deceased individuals will receive the mailing.

“It’s not an invitation to fraud or anything like that. There are many protections in place to make sure only legitimate registered voters get absentee ballots,” Magney said.

Despite the many phone calls from confused voters, McClain said she does appreciate that the mailing is reminding people to get their ballot requests in now.

“When you wait until two weeks before the election, that’s cutting the time really, really close to get (the ballot) back here in time for Election Day. So it is good that people are asking these questions now,” McClain said.

She said in-person voting on Election Day will still be available with added safety precautions to prevent the spread of COVID-19.

“If you get your absentee ballot and decide later, ‘You know, I think I want to vote in person,’ as long as you haven’t returned it yet, you can go to your polling place on Election Day,” Mageny said.

The deadline to request an absentee ballot is Oct. 29. Ballots must be returned by 8 p.m. on Election Day.

Absentee Ballot Applications From State Cause Confusion Among Voters was originally published by Wisconsin Public Radio.