Were The Coasters the Hippest Ever?

It doesn’t get any funnier than “Shopping for Clothes”. 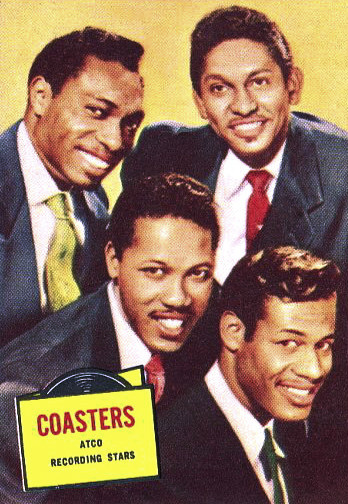 The Coasters. Image is in the Public Domain.

The band Tower Of Power once asked the musical question, “What Is Hip?” Maybe they hadn’t heard The Coasters; if they had there would’ve been no need to ask.

The funniest, smartest and coolest of the 50’s vocal groups, The Coasters had hits galore: “Searchin’,” “Get A Job,” “Charlie Brown,” and “Yakety Yak.” Each was a rockin’ masterpiece and all were written by Jerry Leiber and Mike Stoller, two white guys who seemed to have no idea they weren’t Black. Both had surmised (correctly) that blues and jazz were making America great and when they found The Coasters, they went to work making it greater.

The Coasters were a vocal group, similar in sound, if not content, to the gospel quartets of that era. A lead, tenor, baritone and bass with classic gospel harmonies. They fell loosely into the category of Doo-wop, but their songs weren’t the typical romantic ballads. Two of them, Carl Gardner and Bobby Nunn, had been in The Robins, and that group had created the template for story/songs with Leiber and Stoller’s “Riot In Cell Block Number Nine” and “Smokey Joe’s Cafe.” They followed those gifted writers and producers from the west to the east coast, picking up a new name in the process. When they were signed to Atlantic Records, they picked up right where they left off.

“Shopping For Clothes” was not a hit; it made it to #83 on Billboard. Maybe too much of an oddity, sort of a talking blues taken at a very relaxed pace. Could be it was too much for the white teen market — one writer called it their blackest and coolest number. Nevertheless, it was a gem.

Talk/sung by Billy Guy in the role of more-than-interested shopper, it featured bass man Will “Dub” Jones as the salesman. They’re not really singing, but both are pitch perfect — with a lyric that’s as finely tailored as its topic, it’s a smooth, bespoke routine:

When I got off, a salesman come up to me
He said “now, what can I do for you?”
I said “well go in there and show me all the sport’s clothes
Like you’re supposed to”

He said, “well, sure, come on in buddy
Dig these fabrics we got laid out on the shelf”
He said

“Pick yourself out one try it on, stand in the mirror and dig yourself”

I see for the business man you featurin’ a natural shoulder
That retail, wholesale, indeed
It’s got the custom cuffs and the walking short
He said “And I’m gonna let you have at a steal”

And for the playboy you have the latest in tweed
With the cut-away flap over twice
It’s a box-back, two button western model
He said, “Now ain’t that nice”

Now you go back there and you get that paper and let me sign on the dotted line
And I’ll make sure I get all my payments in right on time
Hey wait a minute buddy, let me go back there and do a little checking on you
Then the man come back, he said “I’m sorry my man, but your credit didn’t go through”

Wait a minute, Lieber Stoller and Kent Harris? Don’t tell me, I don’t want to know. If Leiber and Stoller were song thieves I’m going to be pretty upset. It wasn’t the most egregious case, it turns out they only heard of Boogaloo And His Gang “Clothes Line (Wrap It Up)”, written by Harris, described to them by Billy Guy and built on that. When the record came out, Mr. Harris got wind of what was going on and when the legal dust had settled, his name was added to the credits.

A little glow comes off the Leiber and Stoller brand, but what they did with the track is complete genius. Slowing it down, letting those lines hang out a bit longer, they wind up even drier. The great King Curtis supplies the languid sax and our favorite inmate, Phil Spector, can almost be heard on guitar.

The Coasters were the first group inducted into the Rock and Roll Hall Of Fame. Leiber and Stoller entered shortly after. Together they were a rock’n’roll dream team, unmatched really, until Bacharach and David glommed onto Dionne Warwick. Just because the records were fun to listen to, doesn’t mean they were a joy to make. Leiber and Stoller were known to sweat over these tracks to get them perfect. They were perfectionists, as were The Coasters, and that meant endless takes before they wrapped. Entertainment is what people seek after a hard day’s work — to be truly good mere cleverness isn’t enough. The endless string of hits stopped in the 60’s and now the current owners of the Coasters name make the rounds on the oldies circuit, doing, I’m sure, decent versions of these songs. It may be nostalgia and about as relevant as silent movies. Then again, there’s nothing wrong with Charlie Chaplin.