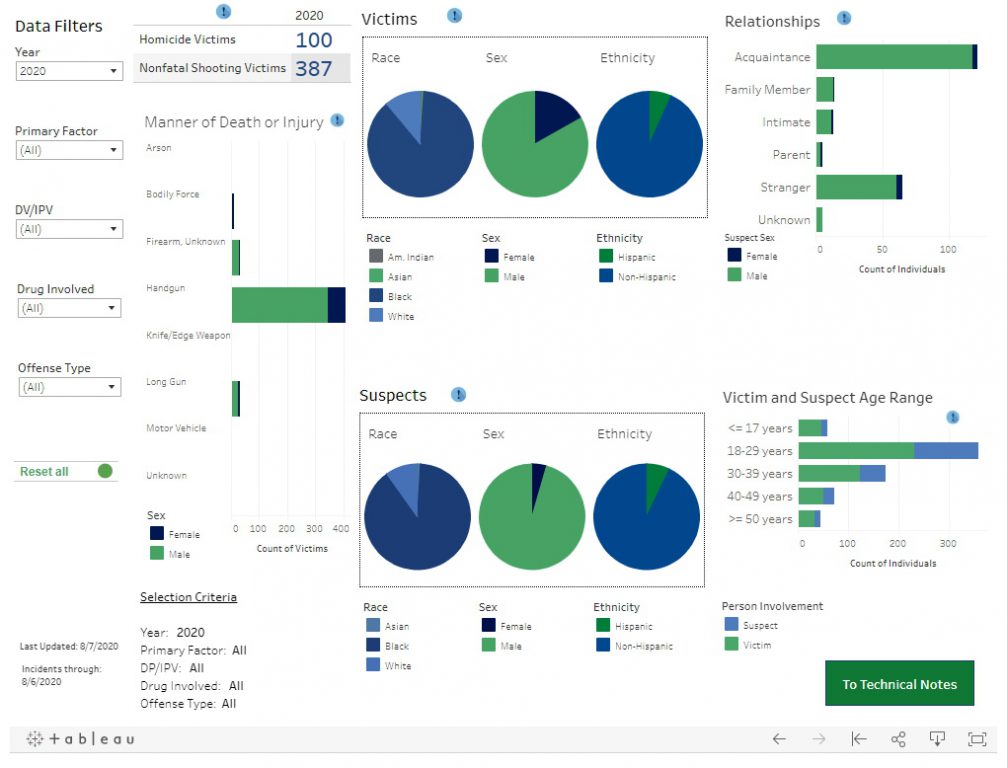 Homicide and Nonfatal Shooting Dashboard. Image from the Medical College of Wisconsin.

Milwaukee’s gun violence statistics are heading in a disturbing direction.

2020 appears to be on pace to exceed the spike in gun violence the city experienced in 2015. As of this month, 2020 has recorded more gun homicides and non-fatal shootings than there were through August 2015.

This data comes from a new database hosted  on the Medical College of Wisconsin‘s (MCW) website. It was developed by the Milwaukee Homicide Review Commission in partnership with the Milwaukee Police Department. The commission serves as a gathering point for law enforcement personnel, criminal justice professionals and community service providers to meet and collaborate on homicide prevention from public health and criminal justice perspectives.

Constance Kostelac, an assistant professor of epidemiology at MCW and director of the MHRC, oversaw the development of the dashboard. In a statement she said the dashboard data provides a “critical tool” for identifying “opportunities for change to reduce or prevent violence.”

The data is presented on a dashboard on the MCW’s website. The data itself paints a gloomy picture of the city’s attempts to tamp down on violent crime.

The MCW dashboard shows that so far in 2020, there have been 100 homicides. Which is about how many there were in all of 2019 when the city saw 98 and 2018 when the city had 99. Unfortunately, 2020 is well ahead of the past two years when compared to the number of homicides at this point in the year.

MCW provides a detailed breakdown of homicide data by year, day, even time of day — showing at what hour most homicides occur on any given day. The dashboard also analyzes homicide and non-fatal shooting data by demographics, geographic location, proximate cause and how exactly the murder, or shooting, was committed.

Some big picture truths are clearly represented in the data. That is, most murders are committed with handguns (83%), are the result of an argument or fight (36%) and happen between people who know each other (53%).

The data on the dashboard uses “suspects” as a data point, because they are working off of information from the police department. And it can take a while for the case to go through the court and a suspect be found guilty or innocent.

What we don’t see is the clearance data. How many of these homicides are solved? How many result in charges? How many killers are brought to justice?

Correction: And earlier version of this story incorrectly said the dashboard was created by the Medical College of Wisconsin (MCW). It was created by the Milwaukee Homicide Review Commission (MHRC). And it incorrectly stated that Constance Kostelac was an epidemiologist. She is an assistant professor of epidemiology. The story incorrectly indicated the MHRC is part of the MCW. Rather, staff and faculty work with the commission, and the MCW is the fiscal agent for the commission.