Associated Bank is planning an upgrade of the Milwaukee RiverWalk segment located outside of the 28-story office tower it acquired in 2016.

The Green Bay-based bank announced redevelopment plans for the 373,000-square-foot building, previously known as the Milwaukee Center, in late 2019 as part of creating a home for approximately 500 employees. The building is located at 111 E. Kilbourn Ave. along the Milwaukee River.

The work, expected to be completed in 2023, includes substantial interior redevelopment to the 1988 building, facade improvements and rebranding the building as the Associated Bank River Center.

The exterior work falls within the city’s 50-foot riverwalk overlay zone and requires approval from the City Plan Commission. The project is being designed by RINKA.

The riverwalk improvements include a new walking surface made from brick pavers, an additional exterior lighting system, planters and benches. Six tree grates “whose trees have been unable to thrive in this location” and are sited in the middle of the walkway would be removed.

Changes are also planned to the exterior of the building, the fifth tallest in the state, including a new outdoor balcony on the level above the riverwalk. The new lighting system would be installed under the riverwalk. The balcony, which would include a folding glass wall, will “enable future food and beverage operators to create a continuous indoor-outdoor experience,” says the submission.

The exterior staircase, visible from the riverwalk, is not intended to be a public access point to the building, according to the filing, and will serve as an emergency exit path. The interior of the building is receiving an elevator upgrade to provide an enhanced accessible access to the balcony level.

The office building is part of a larger complex that includes the Saint Kate The Arts Hotel, Pabst Theater and Milwaukee Rep theater complex. The spaces are connected by a shared interior lobby.

The commission unanimously approved the changes.

The bank acquired the building for $60.5 million. It had previously consolidated its Milwaukee offices into the 330 Kilbourn complex, leasing 97,000 square feet of space. 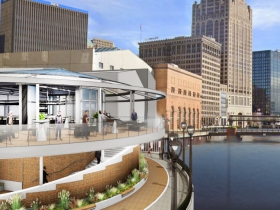 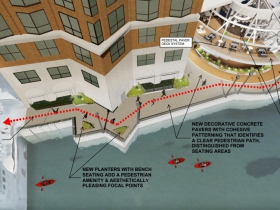 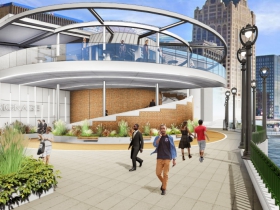 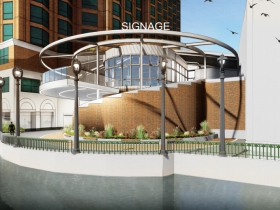 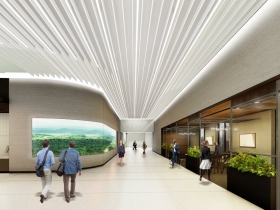 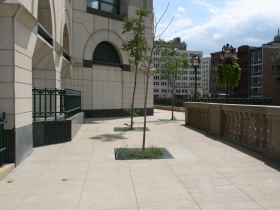