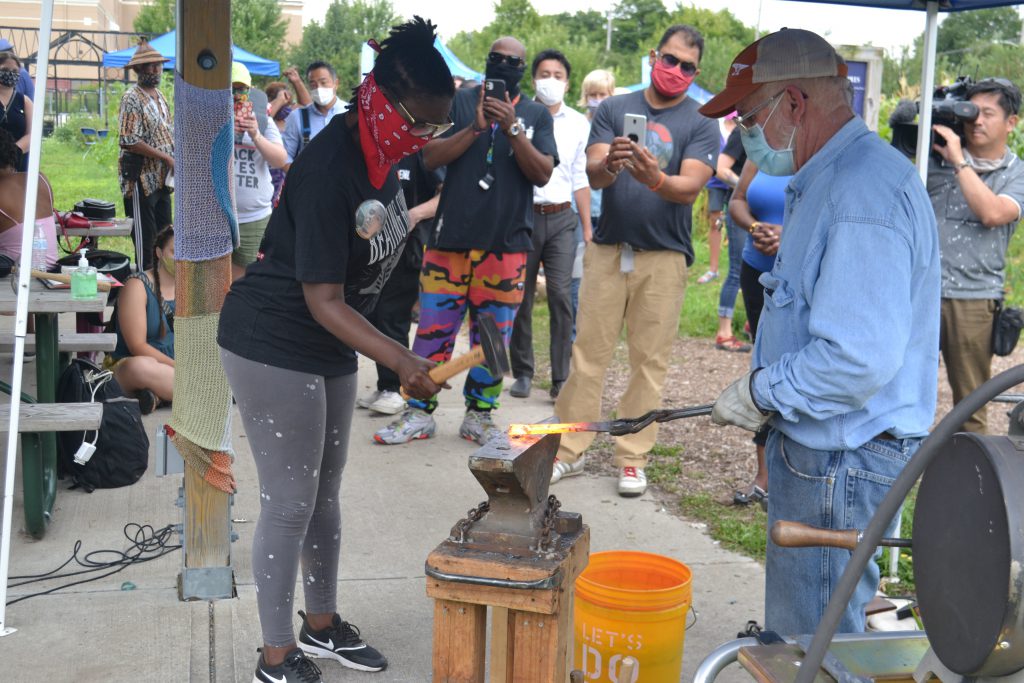 Camille Mays hammers on a piece of a gun barrel being remade into a garden tool, as Fred Martin holds it with tongs on a blacksmithing anvil. Photo by Erik Gunn/Wisconsin Examiner.

Fred Martin pulled out his tongs, gripping a piece of red-hot steel, from the forge and turned to place it on the anvil.

Camille Mays brought the hammer down, pounding methodically at the glowing metal: a shard from a gun barrel. She hammered again and again, the metal head making a quick, sharp bark as it struck the steel and the anvil beneath it.

The ritual on Saturday afternoon at an urban garden on Milwaukee’s near North Side was the culmination of an afternoon rallying “for Jesus and Justice” on the weekend before the stripped-down Democratic National Convention in Milwaukee.

It was at once nonpartisan and passionately critical of President Donald Trump’s administration, and of the shortcomings of politicians not only in failing to hold him accountable but in not addressing social justice concerns ranging from poverty and systemic racism to gun violence and police brutality. 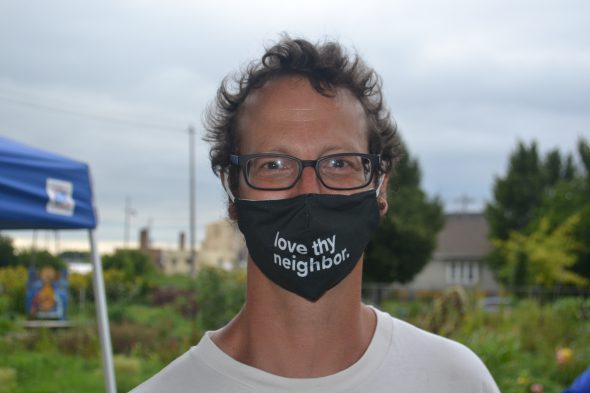 And, says Shane Claiborne, one of the organizers, it was aimed at creating an alternative to the politics that led as many as 80% of white evangelical voters to cast their ballots for Trump in 2016, and to back his reelection in 2020.

“What I’m seeing is that there’s a lot of people that do not find themselves very comfortably at home in either political party,” Claiborne says. “And yet, they’re very concerned about the state of our country. And so I think part of our desire was to create a space that is centered around Jesus and justice that is really fueled by our faith.”

Claiborne is a cofounder of Red Letter Christians — part of a movement among evangelical Christians who dissent from the conservative politics that have largely aligned white evangelicalism with the Republican Party, including Trump.

Red Letter Christians takes its name from the tradition of printing the words of Jesus in the Christian bible in red ink. Those words, Claiborne says, emphasize values and principles that evangelical leaders such as Jerry Falwell, Jr. and Franklin Graham have all but ignored.

Claiborne has been a longstanding critic of white evangelicals’ lopsided support for unrestricted gun ownership and the death penalty — the latter “despite having an executed and risen savior.” He’s been arrested for protesting the death penalty in front of the Supreme Court building and has written a book opposing execution grounded in biblical and theological arguments.

“We’ve been trying to poke away at the holes in that theology for a while, but we certainly see it, I think, in trying to defend the indefensible in the case of Donald Trump and his policies,” he says. “What becomes at stake is not just the reputation of Jerry Falwell or Franklin Graham, but really the narrative of what Christians care about in our country. There’s been a sort of colonizing of Christianity by those white evangelical voices.”

Drawing on an expression that he attributes to the Rev. Dr. William Barber of the Poor People’s Campaign, he adds: “We’re trying to change that by changing narrators, and by talking about what Jesus talked about.”

Together with Vote Common Good — a faith-based effort to mobilize evangelical Christians in particular to vote for change at the ballot box in November by appealing to principles of love and compassion — Claiborne and Red Letter Christians organized Saturday’s Revival in the Garden.

Their goal was to draw attention to social justice on the eve of  the Democratic National Convention. They also plan online events associated with the Republican convention, Claiborne said.

While the revival was originally conceived before COVID-19, the pandemic required organizers to pivot. For Saturday’s event in Milwaukee, the group planned a deliberately small turnout while livestreaming it around the world on the Red Letter Christians website.

The location was Alice’s Garden Urban Farm, at 2136 N. 21st St. in Milwaukee. The event was infused with Christian theology, but with a pluralistic dimension. There was a blessing for the land and the people present by Oneida elder Mark Denning, and among the speakers was the executive director of the Interfaith Council of Greater Milwaukee, Pardeep Kaleka, who is a Sikh.

In deference to the pandemic, people outside of small groups of family or close friends maintained physical distance and wore masks, removing them only to speak to the group. The microphones were covered by protective plastic sheaths that were removed and replaced when it was someone else’s turn to talk.

Gun violence was a central concern.  Claiborne has focused on the issue for many years in his home community in a Philadelphia neighborhood, where he and his neighbors tended to a 19-year-old youth who died on their doorstep.

The centerpiece of the event drew on the words of prophets in the Hebrew Bible: Micah and Isaiah, both of whom cast visions of turning “swords into plowshares and spears into pruning hooks.” Blacksmith Fred Martin turned pieces of the barrel of a gun that had been turned over to the organizers into garden tools.

As Martin began the work at the other end of the garden, Claiborne explained it to the revival visitors. It wasn’t only about guns, he said.

“So all of these forms of violence are what we are naming today. And the gun is just one symbol of that violence and suffering that we want to see transform.”

It’s more than merely symbolic, though, he said: It moves emotions, making it sacramental.

And, he added, it offers a doorway to more direct action. He nodded to the DNC that starts Monday night.

“We’re asking for more than thoughts and prayers,” Claiborne said. “We’re asking for concrete actions. For policies that affect the most vulnerable, there’s lives at stake to be listened to. And until this stuff becomes personal, it’s hard for people to get the urgency, the fire in their bones, to do something.”

Befitting a revival, there were testimonials. Kaleka spoke of the massacre at the Oak Creek Sikh temple eight years ago, where seven people died, including Kaleka’s father, and also including the gunman, a white supremacist.

Brenda Hines and Camille Mays gave testimonials as well — both about losing loved ones to firearms. 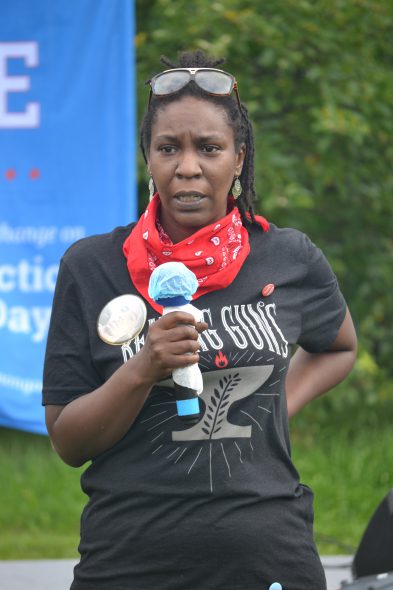 Camille Mays speaks at the Red Letter Christians Revival in the Garden in Milwaukee on Saturday, Aug. 15. Photo by Erik Gunn/Wisconsin Examiner.

Mays for years has organized the Peace Garden MKE, a project promoting community peace and art along with gardens for the survivors of people killed by violence. Then, in November 2019, she lost her son, Darnell Woodard II in a fatal shooting.

“I’m still shellshocked,” she said. “I don’t even accept what happened. But I do accept my purpose and what I know I need to do. And so I think that’s how I find the energy or the strength to stand and to do this so that I can encourage others to do it.”

More people must stand up to support the work of ending violence, May said. “You might not get out to protests, you might not, or can’t get out and do some of the work, but I’m just asking people to do what they can. Because I do not want somebody else who I care about to become me.”

When the testimonies were over, Claiborne led the group over to where the forge — a cylindrical heater the size of a microwave oven — was already ablaze as Fred Martin was working pieces of the barrel of one of the weapons donated that day for the event.

Kaleka, Hines and Mays, and more people beside them, took turns hammering at the heated metal, shaping it into the blades for mattocks — simple, pick-like garden tools.

Mike Martin, who with his father, Fred, has been doing this work for years, mused at the similarity between that word and a common firearm.

“When we go from semiautomatic to mattock, we’re channeling that ancestry of things that come from the same place, but then go in very different directions,” Mike Martin said, holding up samples of the finished work before passing one to be given to Mays. “We have the power to transform them in a life-giving direction.”

The Martins, elder and younger, formed RAW Tools after taking up blacksmithing together about a decade ago and decided to use the craft to make an anti-violence statement.

“It’s been a treat to be able to do something creative,” Fred Martin said, “yet having a purpose behind it is so valuable.”

As with Claiborne, faith animated the work — a faith that places religion in the here and now, not in some future or afterlife.

“It’s such a representative exercise of what Christ’s kingdom looks like,” Fred Martin said of the project. “What he wants it to look like. Not waiting for when he comes back to fix everything. That’s what he wants is us to fix it now — you know like in the Lord’s Prayer: thy kingdom come, on earth, like in heaven.”