By Shawn Johnson, Wisconsin Public Radio - Aug 17th, 2020 11:45 am
Get a daily rundown of the top stories on Urban Milwaukee 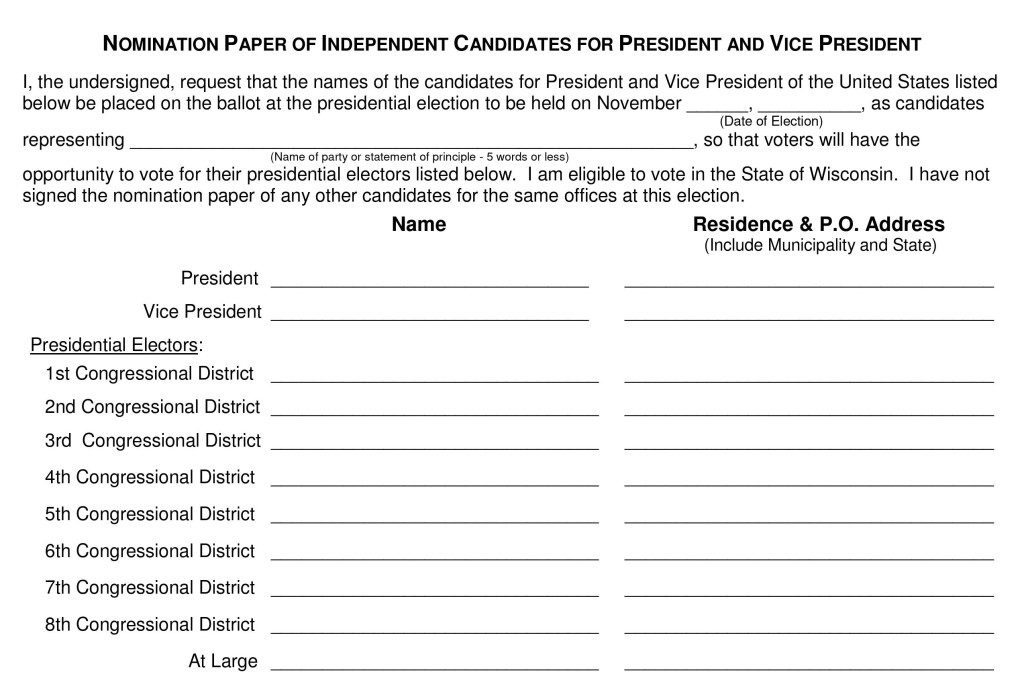 Candidates are required to list their current address on nominating petitions, and according to guidance on the Elections Commission’s website, if any information is incorrect, their signatures must be rejected.

“I don’t think it’s unreasonable or unfair to expect that candidates who want to be President of the United States can follow the clear rules that each state sets out,” said Jeff Mandell, a Democratic attorney from Madison who filed the complaint.

State law requires independent presidential candidates to file at least 2,000 signatures from valid Wisconsin electors to get on the ballot. Hawkins and Walker turned in 3,737 when all their signatures are counted.

“It’s a trivial objection,” said Hawkins in an interview with WPR. “We have plenty of people in Wisconsin who want us on the ballot. And it would be a travesty of justice if we were knocked off the ballot.”

Hawkins said Walker, a Milwaukee native who now lives in South Carolina, moved during the petition drive. He said their campaign manager talked to staff at the Wisconsin Elections Commission to make sure their paperwork was in order.

Wisconsin Green Party leaders told party activists in a July 25 memo that they had recently moved and that they should collect future signatures on new petitions with Walker’s current address.

Hawkins’ campaign did not file a formal response to the challenge. It will be up to the six-member Wisconsin Elections Commission to decide whether to grant the Green Party ballot access when they meet next week.

At the same meeting, commissioners will consider another challenge that seeks to keep rapper Kanye West‘s name from appearing on Wisconsin’s presidential ballots. West, who is running under the label of “The Birthday Party,” has been a supporter of President Donald Trump and has been aided by Republicans in the early stages of his presidential bid. He recently told Forbes Magazine that his candidacy could pull votes from Democrat Joe Biden.

Third-party candidates are coming under intense scrutiny in Wisconsin, in part because of what’s at stake. Donald Trump carried the state by fewer than 22,748 votes in 2016, and both parties have pointed to Wisconsin as a potential tipping point state in the 2020 election.

Jill Stein, the Green Party’s 2016 candidate for president, received 31,072 votes in Wisconsin, an amount that was larger than Trump’s margin of victory, leading some Democrats to blame her for helping Trump secure his bid for the White House.

Hawkins rejected the idea that his candidacy in 2020 could pull votes away from Biden and help Trump win Wisconsin for a second time, saying Trump was running at a time when tens of thousands of people were dying from the COVID-19 pandemic and the nation’s economy was mired in a severe recession.

“If the Democrats can’t beat that, it’s not the Green Party’s fault,” Hawkins said.

Hawkins said issues like the climate crisis and the nuclear arms race would be ignored if not for the Green Party.

If the Wisconsin Elections Commission rejects Hawkins’ petition and keeps him from the ballot, he says his campaign will challenge the decision.

“We’ll take it to court if we have to,” Hawkins said.

Mandell acknowledged that a court might have the final say in the matter, but said the legal question at issue was a simple one.

“The rules are clear and plain and publicly available,” Mandell said. “And here they were not followed.”