City way behind state, nation in response as Trump cuts back time for door-to-door census. 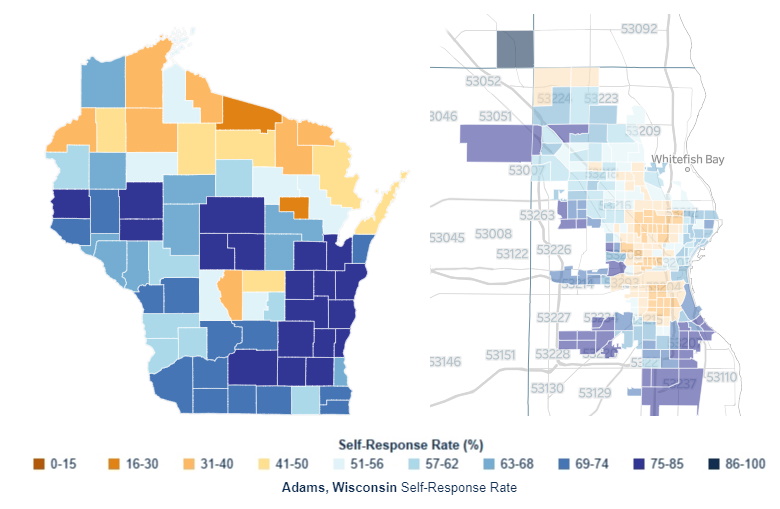 Census response rates in Wisconsin and Milwaukee. Images from the US Census Bureau.

Without leaving your couch or putting down your smartphone, you could help secure at least $13,000 in federal funds to pay for everything from road construction and affordable housing to social services and schools in Milwaukee over the next decade.

But over 40 percent of Milwaukee residents haven’t done so. They have until September 30th to respond to the 2020 United States Census.

The Census will determine how more than $675 billion in federal funds is distributed annually for the next 10 years. It is conducted once every decade and serves as an official population count that is used to proportionally distribute federal and state funds.

According to the Census Bureau website, 57.9 percent of city of Milwaukee residents have completed the self-response questionnaire, a figure that trails both the state (69.8 percent) and nation (63.4 percent) averages.

A 2018 analysis of 2010 Census results by George Washington University professor Andrew Reamer found Wisconsin was the sixth-biggest loser in terms of undercounting. The state lost $1,338 per person from federal medical programs in the 2015 fiscal year as a result of undercounting. The city’s Complete Count Committee estimates the city loses $1,600 annually for each non-respondent.

The areas, along with the city’s Lower East Side, have some of the highest population densities in the state but some of the lowest response rates in the city.

Census tracts surrounding the intersection of N. 92nd St. and W. Burleigh St. and near the airport on the city’s far South Side have response rates in excess of 80 percent.

Census workers are scheduled to go door-to-door to visit non-respondent properties in the coming weeks. But the effectiveness of the effort could be challenged by the COVID-19 pandemic. And now the Trump administration has shortened the time for these door-to-door efforts.

The government is prohibited from using census response data for policing issues, including immigration status, by federal law. The administration of President Donald Trump was blocked from adding a citizenship question to the 2020 Census by multiple federal courts. Multiple state and local officials attacked the Trump administration proposal as a move to suppress the response rate in communities of color.

But the Trump administration has just enacted another policy that could reduce response rates. It curtailed a previous extension of the response period.

Households, as a result of the pandemic, were given a three-month extension to respond to the census. But that deadline was advanced from October 31st to September 30th last week. Door-to-door visits will also stop at the earlier deadline.

The self-response process formally started on March 12th. Househoulds should have already received at least one letter in the mail detailing how to respond, but can also go straight to the census website to submit a response.