Many Back Ramon for Register of Deeds

Appointed by Evers in 2019 to fill the vacant office, he has racked up many endorsements. 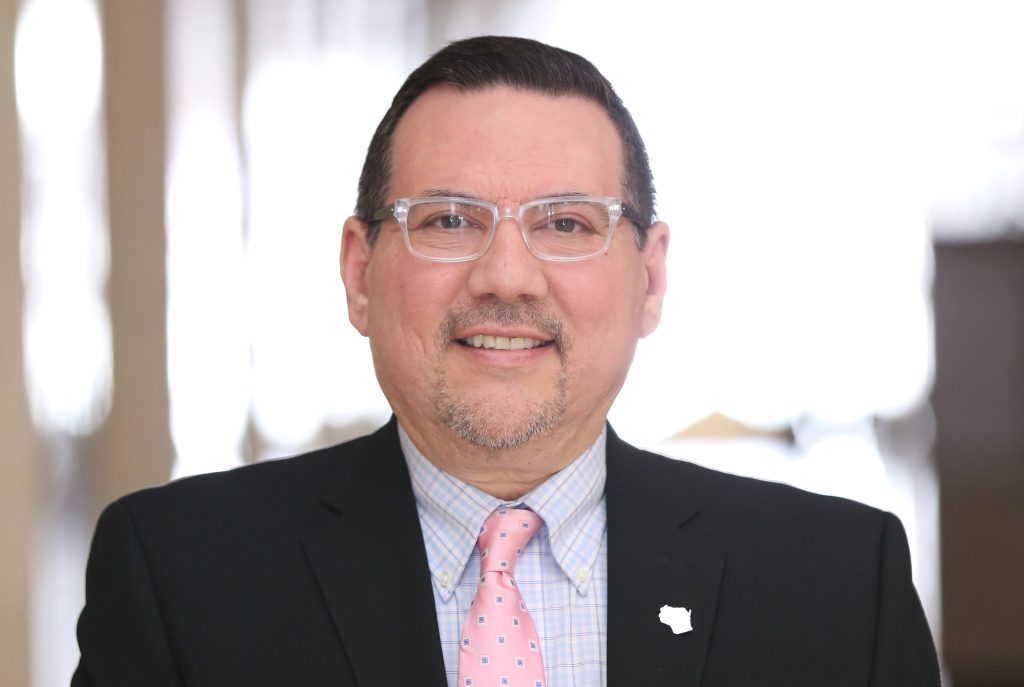 Israel Ramón is up for election this week. Will he keep his job?

He was appointed to the office by Gov. Tony Evers in 2019 after the former register, John La Fave, retired while under investigation by the FBI for an invoicing scam, to which he has recently pled guilty.

Now Ramon is running for a full term and is facing Milwaukee County Supervisor John Weishan in the upcoming partisan primary.

Ramón recently told Urban Milwaukee that one part of his decision to run for the office is because Evers specifically asked him to. When he was appointed, he met with the governor and, along with his mandate to clean up the office that La Fave had abused, he was asked to run for it in 2020, to make sure the reforms stuck.

Ramón was born in Mexico and immigrated to Chicago with his parents as a child. He said he’s a lifelong Democrat, raised in a union household — his father was a construction laborer. After high school he got a degree from a technical college and started working as a respiratory therapist. Ten years later, he put himself through Marquette Law School.

Ramón prizes his education. Neither of his parents made it past the third grade, he said. Yet all of his siblings have college degrees. “We’re living, I think, the American Dream.”

He practiced law for 25 years, working for labor and employment firms representing workers, injured workers and “union folks”. Ramón also helped Voces De La Frontera set up their legal clinic and was a volunteer attorney for the organization for 12 years.

When Ramón took over the Register of Deeds office in Spring 2019, it was a mess. Not only was it plagued by scandal, but it wasn’t running efficiently, he said. One of the first things he had to do was overhaul the invoicing process, as that had been at the center of La Fave’s illegal scheme. Then he set about to make the office run better for Milwaukee County residents.

There were significant staff issues, he said. Unfriendly service that went beyond garden-variety bureaucratic languor and included allegations of discrimination. “Which I found very distressing,” he said. Ramón had his staff undergo equity training, as many county departments have done in the past year.

“It has not been easy,” Ramón said. “There was really a culture that developed within that office where customer service was not a priority for them.”

Ramón also made the office more accessible to residents than it’s ever been. He added a language line with over 200 languages. So county residents that don’t speak English as a primary language can still access the office.

Ramón is a self-described “legal nerd”. He said he genuinely loves statutes and administrative codes. The Register of Deeds is a constitutional officer. And Ramón said, “I love that this office deals with statutory authority.”

After La Fave left the office, local Democrats started reaching out to see if he’d consider the job, noting that the office would be well served by someone with a legal background.

A lifelong Democrat, Ramón has been a member of the local Democratic party for some time now, though his real political juice likely comes from his time working with Voces. He served on the board of that organization for several years and one longtime local Democratic activist said his work there is a “key to his political connections.”

Since announcing his candidacy Ramón has racked up a huge number of endorsements, from some of the most powerful Democrats in the state. These include Evers and Lt. Gov. Mandela Barnes, which are not surprising considering Evers asked him to run. But he also has the support of District Attorney John Chisholm, U.S. Representative Gwen Moore and former County Executive Chris Abele. He also has been endorsed by every single Milwaukee County Supervisor, except his opponent Weishan. He has endorsements from seven City of Milwaukee Common Council members, school board directors, labor groups, a number of state representatives and senators and eight mayors from the Milwaukee area — including Tom Barrett.

All this for the Register of Deeds race. It’s an important office in the county, but it lacks the flash or prominence that typically draws significant public interest to a race. Incumbent Registers of Deeds often run unopposed.

Ramón himself noted it’s a relatively small office in the county, compared to some of the other offices and departments. But it looks big in this primary election.

One thought on “MKE County: Many Back Ramon for Register of Deeds”