Pandemic is worsening the crisis of evictions in Milwaukee.

By Isiah Holmes, Wisconsin Examiner - Aug 6th, 2020 01:13 pm
Get a daily rundown of the top stories on Urban Milwaukee 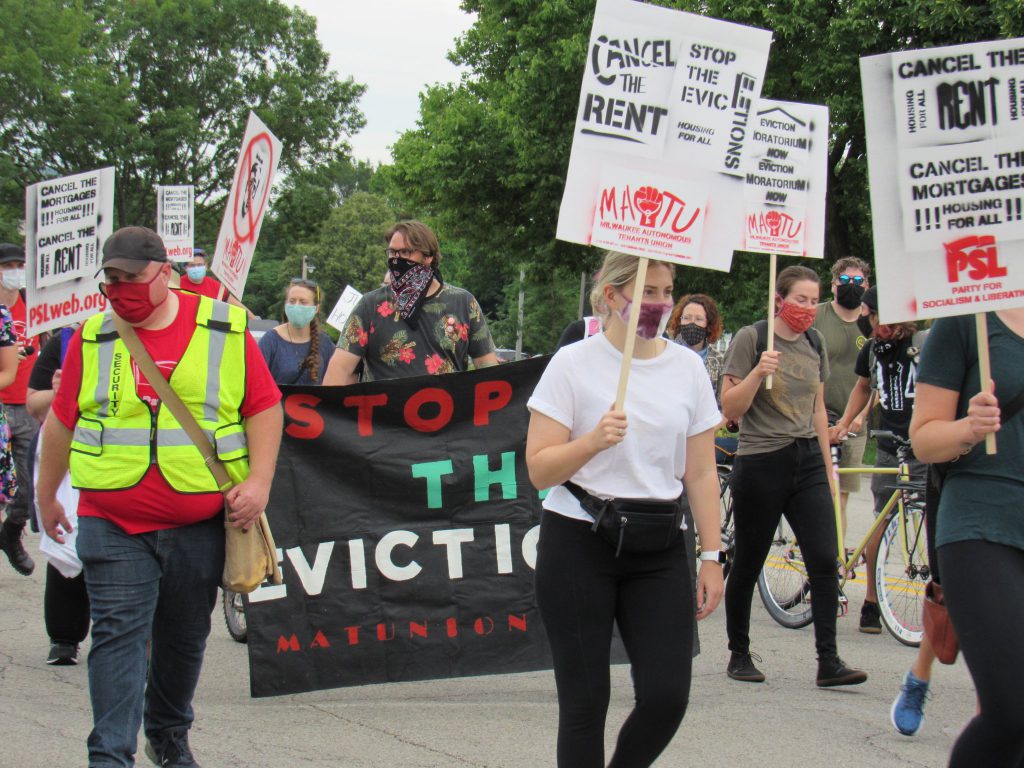 Protesters gather to march on Mayor Tom Barrett’s house, to demand a freeze on evictions. Photo by Isiah Holmes/Wisconsin Examiner.

After being evicted from her home in 2019, Jacqueleen Clark knows all too well about the trials that may await families in Milwaukee County who lose their housing. A series of bad experiences as a renter compelled her to join the Milwaukee Autonomous Tenants Union (MATU). Her goal is to help others in similar circumstances as evictions are on the rise in Milwaukee.

“I joined the union because I personally was evicted by one of the most notorious renters in the city, and that was Berrada property,” she recounted, referring to properties owned by Youssef “Joe” Berrada. “For a year I lived in my apartment with no hot water because Berrada refused to come out and repair the problem. It was cut off due to a gas leak in my apartment. Prior to that, I was late to rent a couple of times. Was forced to go to eviction court, and an eviction was placed on my record. I was never really kicked out of the apartment, I remained living there.”

Clark had to pay double rent due to being late, all in the middle of 2019’s winter. She eventually had to leave. “For a year I had to couch surf,” she said, until she recently found housing. Even then she had to pay a double-security deposit, “Because of the eviction on my record.”

Robert Penner, an organizer with the Milwaukee Autonomous Tenants Union (MATU), told Wisconsin Examiner that this action was just the start. It’s “a first step in demanding better living conditions for tenants and demanding everybody be able to remain in their home during this crisis, and throughout this crisis,” he said, adding that much of the public does not realize there are people who are being “thrown out of their homes” in the middle of a pandemic.

On Saturday, August 1, residents gathered at Milwaukee’s Washington Park Senior Center, not far from Barrett’s home in the Washington Heights neighborhood. The marchers called on support from city officials and took the opportunity to publicly shame some of the city’s most notorious landlords who have bad reputations among renters.

According to data on evictions in Milwaukee, the city’s rate of evictions was down in the final months of 2019 before the pandemic. The last number recorded for 2019 was 873 evictions per month filed, but with current trends, that number is estimated to surpass more than 1,450 for some months in 2020.

Evictions in Milwaukee County were up 26%, with many being linked to just a few large, private entities which own swaths of properties throughout Milwaukee. Companies owned or affiliated with Berrada, for example, filed 225 of the 461 evictions that were filed the week of June 22. Berrada manages about 8,000 rental units throughout Milwaukee.

Companies owned by Berrada, however, are not alone in causing this trend. Even during the state-wide moratorium on evictions ordered by Gov. Tony Evers in April, tenants in Milwaukee and elsewhere continued to report that their landlords still expected timely rent payments despite Wisconsinites finding themselves without work during the pandemic.

Penner also highlighted the difficulty in navigating eviction court, and knowing one’s rights as a tenant. “If you’re evicting anybody during this crisis, no matter what size of a landlord you are, you’re not our friend, you’re our class enemy,” said Penner. “But really that’s not who we’re seeing do the evictions. We’re seeing these large real estate companies, or these individuals like Nicholas Rezny or Daniel Bruckner, who all have these LLC front-groups that they manage properties through … these random companies that they’re able to hide their properties through.” Penner feels that these sorts of landlords, “exploit people’s rent for a living … they just act as gatekeepers to housing.” Many of these sorts of landlords also target their business at low-income and minority communities.

Once the marchers had traversed the side streets around Barrett’s home, bringing both car escorts and people on foot, they settled across the street from his dwelling. There were no lights on and no cars in the driveway, so the mayor may not have been there to witness the display. Down the street on either side of where the marchers settled, two Milwaukee police vehicles watched from a distance. Penner then opened up the microphone to anyone who wanted to share stories with the crowd, or vent frustrations. 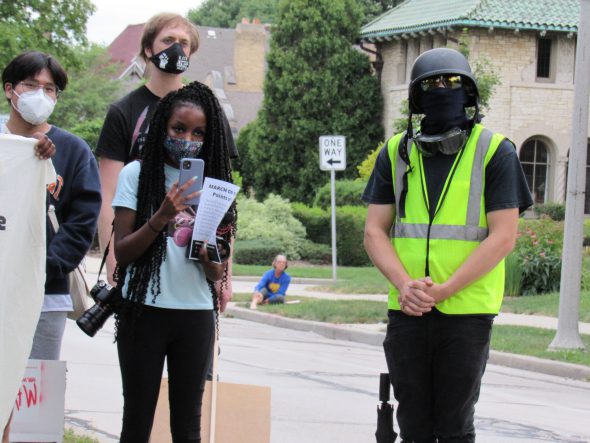 Properties in particular. “The problem with what he is doing right now is that he’s using our civil courts as a way to demand that people are paying back-pay on their rent, they’re paying legal fees, they’re being evicted. And within the month of June, right after the rent freeze was [lifted], he accounted for 19% of the evictions that were in the court at the time.” She added that “most of his tenants are in Black and brown communities, which are the most vulnerable and suffering from this pandemic the most.” Berrada Properties did not return a phone call from Wisconsin Examiner.

Penner feels that for those fortunate enough to have secure housing, the issue of eviction may be easy to ignore. “People who are comfortable, people who have enough savings, have been able to be accommodated by their landlords, they don’t know that people are being thrown out of their homes,” he told Wisconsin Examiner. “And they don’t know how difficult it is to navigate the court system … Most of the people we talk to as tenants, when we’re doing our one-on-one conversations with people who contact us, they don’t know their rights. They’re not aware that they have certain rights as tenants, and they don’t even know how to enforce those rights.”

Clark is concerned about how the uptick in evictions for Milwaukee may play into the election. “You need an address to vote,” she told the crowd. “If you don’t have an address then you can’t vote. So I think there’s a little hidden agenda with this.”

In addition to demanding a moratorium on evictions, MATU has a list of four other demands the group wants to see fulfilled by the city. Those demands are:

While millions of dollars have been put by the state, Milwaukee County and the City of Milwaukee into rental assistance programs during the pandemic, that has not been enough to stop evictions.

Penner stressed that he’d like to see city officials try to help out and make progress on evictions, even if their legal authority is limited.

Mayor Barrett said Saturday that, “I’m very sympathetic to their aims.” However he told the Milwaukee Journal Sentinel that state law prevents local governments from imposing regulations on landlords due to former Gov. Scott Walker-era policies. In a Thursday virtual meeting, Barrett said another $5 million in federal funds will be allocated to rental assistance, bringing the total to more than $15 million. The mayor hopes this will help 3,000 families keep their homes. Still, activists want to find a way to get to a complete moratorium on evictions during the pandemic.

“At least try,” pleaded Penner. “Try to put an eviction moratorium in place. That’s what people desperately need right now. So do it.”